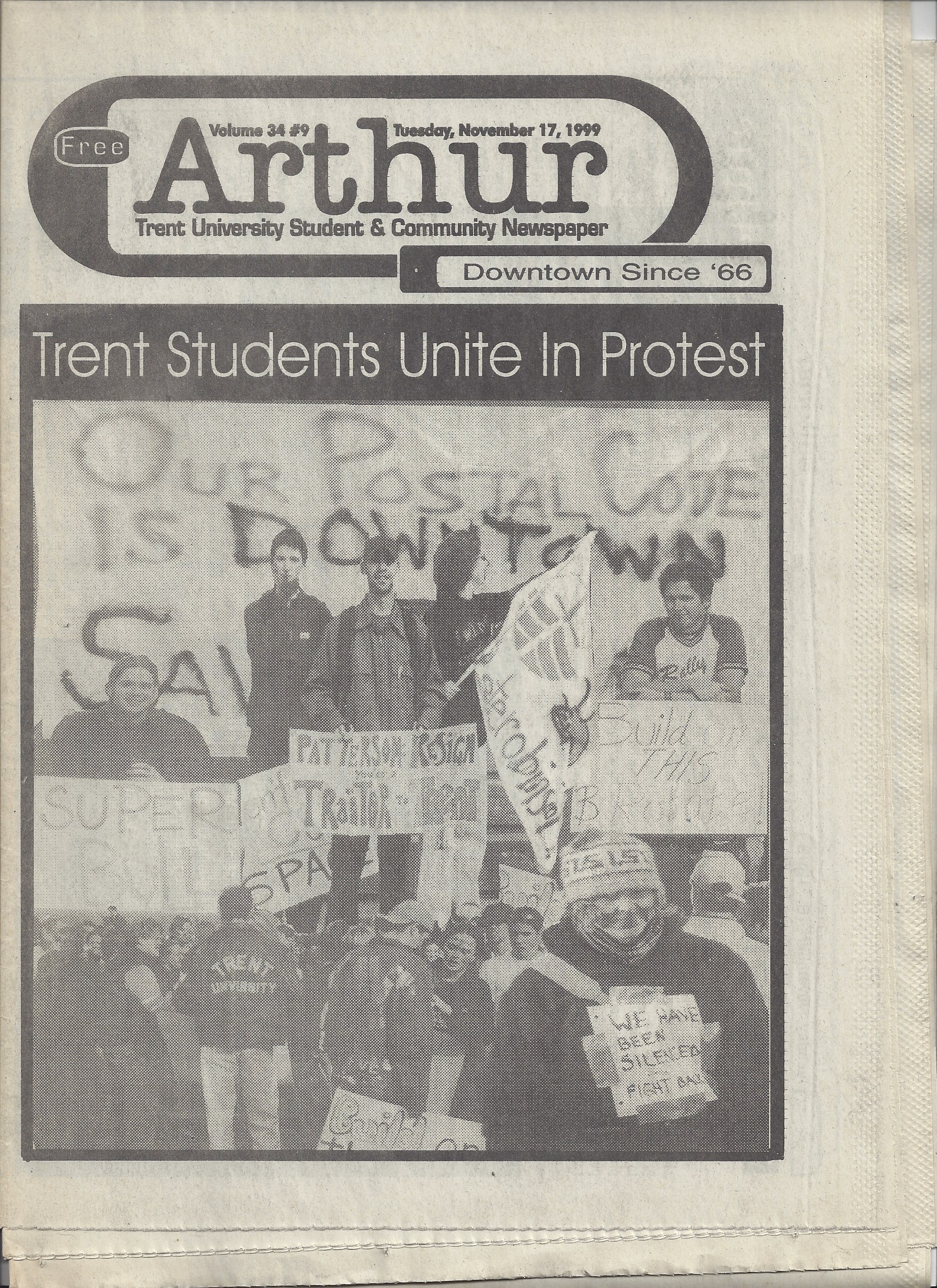 It's Always Sunny for Bonnie Patterson

By law, the “Sunshine List” has to detail the annual salaries of all public-sector employees making over $100 000. In 2017, Bonnie Patterson made $257 760.45, despite only being listed as a Professor. That is $17 760.45 more that the next highest earners on the list - the Vice Presidents of the University. No other professor on the list comes close the these figures, all of whom fall under $200 000 per year. Patterson occupied the second spot on the 2017 Sunshine List, next to President Leo Groarke.

Patterson is listed as full-time faculty on the Trent University’s School of Business webpage under the name “B. M. Patterson,” but is not listed as faculty in the 2018-2019 Academic Calendar.

Questions regarding Patterson’s employment were directed away from the School of Business and toward Provost and Vice-President Academic, Dr. Jacqueline Muldoon.

“I personally do not know all the details relevant to the questions you are asking,” Dr. Muldoon stated in email correspondence at the time of writing. “The individual who would have those details is currently away from the University on university business but will return next week.”

A simple Google search of her name turns up Patterson’s Trent webpage, highlighting her accomplishments during her career at Trent – as both a Professor in the School of Business, and President and Vice-Chancellor from 1998 to 2009. The webpage details the various notable events that took place at Trent under her leadership: “the [opening of the] Chemical Sciences Building, Peter Gzowski College, the first-in-class ‘Worsfold Water Quality Centre,’ and the new DNA Building.” Patterson’s role as Professor in the School of Business is written in the present tense, going on to detail the many committees and boards Patterson has served on over the years.

Having only read the website, one might be safe to assume that Patterson had two unequivocally successful and innocuous terms as President. For most Trent alumni who attended the university in the late 1990s or throughout the 2000s, the name Bonnie Patterson will surely ring a bell. For Trent’s current student body, those who know the name are few and far between. So let’s take a walk down memory lane.

Whose University Is It? (2003) follows the restructuring of Trent University that took place during Ontario’s Mike Harris years, as public funding for the university was cut and the administration had to look to the private sector to compensate for these losses. The documentary located the beginning of this shift in the appointment of Bonnie M. Patterson as President of the university, an accomplished administrator who the documentary referred to as “a disciple of the same business philosophy supported by the government.”

Part of this 'business philosophy’ is the public sector’s partnership with the private sector to sustain optimal levels of growth. In May 1999, this took the form of a program implemented by the Ontario government called “Super-Build”: a “highly competitive fund designed to reward universities who can demonstrate that they are in line with the new corporate ideology.”

Under Patterson’s leadership, Trent University responded almost immediately by putting together a task force to determine what they can propose to qualify for funding under this program. One such member of the task force was Christopher Michael, a former employee of the Ontario Ministry of Education, who was later quoted in an email saying that the “government of Ontario is on an accountability witch hunt and is looking to make an example of a university that is not accountable to its consumers.”

At the task force’s first meeting, Michael and the Chair, Harry Kitchen, outlined a detailed plan for the future of the university that involved the disposal of its two downtown colleges at the time – a plan that some of the committee members argued was already set in stone before the committee was even struck. This proposal was rationalized by the belief that it would generate more revenue for the university.

It is worth noting that the downtown colleges, Peter Robinson and Catherine Parr Traill, were thriving. They were considered “the heart of the humanities” at the university. Peter Robinson College (PRC) was known as a hub for the queer students and artists who attended Trent at the time. The downtown colleges symbolized the close-knit culture and liberal arts reputation that Trent was known for. Their success attracted the attention of Peter Kulchyski, Chair of the Native (now Indigenous) Studies department.

Kulchyski was looking to undertake an ambitious project, now known as The First Peoples House of Learning, specifying PRC as the proposed location for the project. Patterson, having already been made aware of the task force’s plan to sell of the downtown colleges, agreed to help Kulchyski fundraise for the project, still advertising the downtown location in the fundraising literature.

In Volume 34, No. 4 of Arthur (October 1999), after the task force had been struck and the infamous plan had been proposed by Michael and Kitchen, Patterson contradicted controversial administrative leaks, stating publicly, “If you’re talking about closing colleges right now, absolutely not. I can’t imagine why anyone would think that.”

One month later, in Volume 34, No. 8, Arthur’s cover story announced that the Capital Development Strategy 2000-2004 had been released by Bonnie Patterson, which included the sale of both Peter Robinson College and Catherine Parr Traill College and all related buildings. It also included the plans to build a new facility at the Symons Campus to house the PRC and CPT faculty and students, and accommodate the needs outlined by the proposal for a First Peoples House of Learning.

But of course, major decisions such as this, must be approved by the both levels of the university’s bicameral government – the Senate, and the Board of Governors. On November 9, 1999, the Senate voted against the proposed disposal of the downtown colleges, for fear the decision will compromise the university’s academic integrity.

On November 12, for the first time in the University’s history, the President ignores the Senate, taking the plan directly to the Board of Governors – whose Chair, Gary Wolff described the Super-Build program as “a wonderful opportunity.”

The Board of Governors agreed to pass Ms. Patterson’s plan, and in doing so, drastically altered the relationship between Trent University and the city of Peterborough, forever.

None of this sat well with students. More than 1200 students, and over a third of the faculty signed petitions in opposition to the plan.

Over the next two years, students demonstrated boundless forms of creative resistance to protest the sale of the Downtown Colleges. The Trent Community Coalition was formed. Faculty such as Peter Kulchyski, Andy Wernick, Ian MacLachlan, Alison Hearn, and George Nader were very vocal in their opposition to the plans of the administration.

On February 27, 2001, the community protest culminated in a now infamous sit-in. For three days, eight Trent students occupied the VP of Academics’ office in peaceful protest, while 17 others held vigil outside. Bonnie Patterson visited the sit-in to tell the students that their demands were non-negotiable. Shortly thereafter police presented the students with a letter, asking them to leave peacefully, and threatening them with charges for criminal mischief.

The students tried to negotiate with police, but refused to leave. The sit-in ended when 25 police officers dressed in riot gear dragged the eight students – whose bodies were limp and chained together – out of the building and off to the police station, where they were strip-searched, held, and interrogated.

In the weeks that followed, faculty members met with Patterson to denounce her handling of the issue, particularly the decision to call the riot police on what had been a peaceful protest.

Patterson goes on to be appointed to a second term as President. She will be employed at Trent University for another 16 years.

Unfortunately, the tale of Bonnie Patterson sounds all too similar to Trent’s current predicament. President Leo Groarke has penned an op-ed for the Globe and Mail supporting the Premier’s decision to cancel funding for the expansion of several GTA post-secondary campuses. In response to the Premier’s latest announcement regarding the cuts to tuition fees, Leo told all humanities and social science departments that they will be forced to make a 5% cut to their operating budgets, while science departments will only have to make a 3% cut. For some faculty in more precarious positions, this will result in job loss. The Ford government’s proposed changes to Trent’s levy policy also put the Sadleir House at risk of losing student funding – a building that was once the keystone of Peter Robinson College.

While we look forward to further explanation regarding Patterson’s ranking on the Sunshine List, we have to question if there is any moral justification for paying any employee of the university such an exorbitant amount of money, especially as recent years have witnessed increasingly precarious employment for university employees across all sectors – whether it’s part-time faculty, or food service workers. More broadly, we have to honour the history of creative student resistance at Trent, and make it known to the administration that we will not tolerate the ways in which they continue to welcome the corporatization and degradation of our beloved university with open arms.

New Store: You're Welcome
By
Nick Taylor
and
Culture
|
Arts