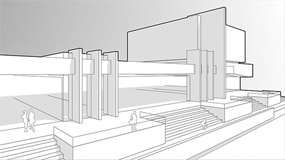 Catching up with an old friend: the student centre

Written by
Jack Smye
and

The much-debated and much-discussed Student Centre seems to have taken the next step closer to being built, though some would argue that the methods used have been questionable at best.

Last week, the Trent Central Student Association (TCSA) voted yes on an unprecedented and controversial by-law at their General Meeting. The vote was seven for and three against, with several abstentions.

You may not have known this vote was happening since, according to some members at the meeting, it wasn’t well advertised. There was no mention on the TCSA website, twitter feed, or facebook page. There was no P.S.A. on Trent Radio and nobody here at Arthur was notified until two days prior to the vote itself.

Yes, the meeting was advertised, but there was no mention of what the by-law entailed.

The by-law in question prohibits the TCSA from removing, altering, or diminishing the $95.01 student levy that is required to build the Centre. This is something that has never been done before and adds another layer onto an issue already rife with controversy.

In 2012, a referendum was held to determine whether or not students wanted to bare the majority of costs for the building of a Student Centre south of Bata Library. This levy was rejected by students.

Just one year later, the TCSA again proposed a similar levy; this time with three yes options and one no option.

Students were given a ballot asking them to indicate whether they support an $85, $95, or $105 levy for the project, or no levy at all. The majority of votes were given to one of the three yes options and the number for the levy was averaged out—hence $95.01.

This type of ballot was another first for Trent University.

Current TCSA President, Braden Freer, commented on this. “Without bashing predecessors, I think it was unfortunate that we entered into a referendum a year after. The year before, it just barely failed. [The TCSA] wanted to carry on momentum and hopefully win.”

It wasn’t just those on the board of the TSCA pushing this through, however. Steven Franklin, the president of the university at the time, is quoted in an Arthur article released December 4, 2012 saying a student centre has been the university’s “...number one priority for several years now.”

However, the university can’t build a student centre without downloading the majority of costs onto its student population, which is what some would suggest led to a questionable referendum after students had already turned it down the year before.

The referendum that did pass claimed a “student owned and operated centre.” Students were to kick in $14 million dollars and the university was to raise $7 million.

This $14 million building was guaranteed by the TCSA president at the time, Ben Perry. Perry was quoted in several Arthur articles as well as TCSA board meetings as saying Trent has a $14 million dollar student centre.

Last February, however, it was confirmed that the levy approval was only enough to construct a building somewhere around $10 million—less than half of what students voted yes to.

It’s also unfortunate that students were told they’d be getting a 36,000 square foot building because, as of last week’s discussion, that number is closer to 19,400.

Students were also told that third-party contracts, such as Chartwell’s food service, would not be applied to the centre. Recent viability reports show that this is now being considered.

Many questions have been raised about what students voted for and what students will be getting. While the TCSA maintains that this building will be entirely owned by students, there is very little discussion about who actually wants it.

Also, by all accounts, it seems that students are not getting what they voted for. Students were told they’d be getting a $21 million dollar building that’s 36,000 square feet. Do students actually want a building that’s half that price and nearly half the size?

Whether or not students want this needs to be entirely clear, being that students will be covering the costs for the next 30 years—with no chance of bringing it back to referendum.

Other questions have been raised about how the TCSA is going about getting this building and the kinds of precedents this sets.

First would be the ballot itself. Three yes options and one no option just one year after the referendum was denied by students. Are other levy groups allowed to do this type of ballot, or is it just the TCSA?

Furthermore, are other levy groups allowed to propose by-laws that prohibit the levy from being removed, altered, or diminished; apparently preventing the by-law from being lifted? Or, again, is this just a TCSA thing?

Finally, would another group be allowed to go through so much controversy, let-down, and false-promises without having to be responsible to the students through a referendum?

Last week, 10 students voted on locking in a $95.01 levy for the next 30 years on a building that students might not even want.

With a levy that’s been so contentious and unprecedented, some members attending the meeting suggested it should have instead been put back to the students in a referendum.

Apparently that view isn’t shared by all. The TSCA and the university have decided to forge on behind closed doors and without real student approval, regardless of the fact that students are paying for it and aren’t really getting what they voted for.

Those concerned are definitely encouraged to voice their opinions though. As Braden Freer put it, “We’re going full steam ahead until students tell us no”.

For somebody to say no, usually they have to be asked a question or presented with an issue.

The Big Switch: from TCSA to Trent Mobile
By
Spencer Wells
and
From Jack Smye
Hmmmm...
It looks like there's nothing else from this author. Perhaps you, the reader, could
pick up the pen and begin where they left off.
Culture
|
Arts