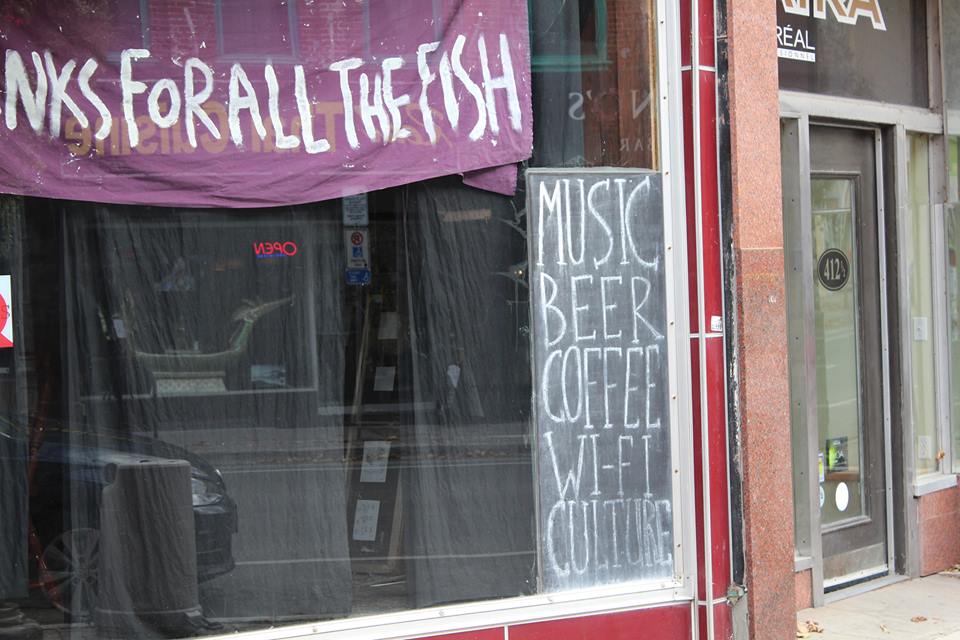 Closures, Openings, and a Tribute To The Spill

On November 3rd, Market Hall hosted an event entitled, "We Love the Spill: A Tribute to Dave Tobey." The event was framed as a thank you to Dave Tobey for all he had done for the Peterborough arts community. In this gesture of thanks and good will, all money raised at this busy concert was given to the man himself, as help to try and offset many of the costs incurred through the operation and upkeep of a small business over a period of almost 20 years.

The event itself was heartwarming at moments, as well as immensely sad in others. It was a remembrance of The Spill’s influence, and an evocation of The Spill’s energy. In some ways, this was a sad night, consolidating the fact that The Spill truly is over. In others, it was a reminder of the community that existed within The Spill’s walls, a community that, while displaced at the moment, still exists.

From the event’s Facebook page, Tanner Paré summarized, “Due to unforeseen circumstances, The Spill is closed. This is heartbreaking on so many levels, as the Spill was a safe and inclusive incubatory for art and culture, a place that many musicians played their first show, and a community hub. It will be sorely missed.”

This is true, The Spill will be missed; but what is more disheartening is the ‘unforeseen circumstances’ that seem to be so common in Peterborough right now. At the tail end of last school year, The Pig’s Ear closed. Only about two months into this school year, The Spill has shut down. While The Pig’s Ear gave advance notice of its closure, The Spill was not able to do the same. Although both closures were not ‘unforeseen’ in the same way, if someone told me that by November of 2017 these two downtown institutions would be gone, I probably would have laughed in your face. I’m assuming that this is probably the case for many people linked to Peterborough’s downtown culture.

In the wake of these closures, one cannot help but continually ask, “Why?” I will state explicitly that what follows will not be focused on rumour, but rather the ideas, opinions, and frustrations of those intimately tied to Peterborough’s downtown bar and music culture.

While writing the more general piece on The Spill's closure from the last issue, a common worry that was expressed regarding Peterborough's downtown culture was that it seems to be becoming more homogeneous. With the recent closures of The Pig’s Ear, and The Spill, paired with the arrival of The Social and 180 (another two establishments run by Aria group), it seems that hegemonic corporations, instead of independent businesses now dominate Peterborough’s bar culture.

When asked what The Spill’s closure means for Peterborough, Patrick McIntosh - a local musician, and sometimes booker of shows - stated that, “It's a huge hit to the music scene. I remember about this time, last year, I was trying to get more involved in the scene by booking a show. It was just surprisingly easy to get into it because The Spill was so helpful. In a city this small there's only a couple places where alternative genres of music are played regularly. Losing one of those is gonna make everyone freak out a bit and wonder what to do.”

Patrick easily articulates one of the main worries regarding The Spill’s closure. That being, where the hell are people going to play? A common answer to that question was basically the idea that 'where there’s a will, there’s a way,' but as Chet Singh, musician from Dub Reggae band, Dub Trinity, points out, it is probably not that simple. He asks, “How can vibrant spaces that cultivate artists and musicians survive within a capitalist economy that only values the bottom line?”

More frightening than the closure of these venues themselves is the implication that unique, independent business are becoming rarer, because of an inability to exist in a society that values money over community. In a town with high poverty and unemployment rates, as well as a downtown core made up mostly of students and low-income individuals, the ability to make money is deeply tied to attendance. Filling the bar is most important, not necessarily how one does it, or what is on the stage at the time. While this is obviously the case in many cities, in a downtown populated by people with little disposable income, the shift towards homogenous bars may have to do with the value of the dollar. Why spend your money on the up-and-coming act, when the club down the street can provide and facilitate more people, provides drink specials, and has larger and multiple areas to hang out?

From a behind-the-scenes perspective, an anonymous source highlighted this point nicely. They stated, “To think of it as a bar owner, you would love to support a local musician and have them play their music. But you would also love to pay your employees, rent, and every other bill. So the real question to ask is what is going to draw a larger crowd: a local indie artist playing their music that may or may not have a following, or a cover band that will play the hits that everyone loves? Small business owners are risk takers but the smart bet is on the cover band. It's the sad reality of business, and the dollar figure you can earn off of an act really reflects [your] willingness to support them.”

This sobering comment highlights an overlooked reality of our many beloved downtown businesses. While they may ideologically represent openness, inclusivity, and community, at the end of the day, they still need to make money to survive. The same anonymous source stated, “[Many independent businesses] were opened for something more than the idea of making millions of dollars; while earning a return on their business was a part of the goal, they dreamt of something more that would bring people together. Unfortunately 5, 10, or 15 years later that dream is a forgotten memory.”

A lot of the reason that students, artists and locals are drawn to this town is the common conception that Peterborough has a variety of places that are different, inclusive, artsy, etc. However, this difference, that is a major selling point for those that reside, work or go to school here, seems to be less of a reality anymore. Hegemonic corporations are replacing bars that are independent and unique. While genuinely fun, these bigger business establishments may be taking away from the community-based vibe that has come to represent Peterborough’s downtown.

Having said all this, however, many people do not buy into this notion. Katie Green, Trent University PhD Student and course instructor, stated that, “The life of local music scenes is cyclical. There are always going to be high points, where there always seems to be a venue open and lots of possibilities for events. There is also always going to be low points where it seems like all the best spots have shut down and people appear to have packed up and moved on.” Katie’s field of study is music scenes, specifically punk scenes. Her comments are reassuring, as she knows more than almost anyone on how scenes act over time.

She further explains, “I don’t think this situation is unique to Peterborough, nor do I think it’s an issue of a lack of preference for more independent spaces in the city. The desire for live music, and for venues that cater to more alternative forms of expression, exists in this city. The evidence for this desire is in the number of people who attended and organized such events, not just at The Spill, but also at Peterborough’s other independent venues (i.e. The Garnet, The Pig’s Ear, etc.). Conventional venues like Aria are spaces that are specifically designed to meet the needs of a larger, mass audience, as opposed to more niche markets, like punk or other underground or indie communities. Unlike The Spill, Aria is not interested in hosting community workshops or featuring up-and-coming independent musicians. That’s not their intended purpose as a business and that’s OK. There’s room enough in Peterborough for both types of venues."

So where do we go from here? And whose responsibility is it to take action and provide a place for local musicians to perform and cultivate their craft? Chet Singh reiterates a similar question, “What is the role of public institutions such as universities and colleges in providing such spaces? What is the role of the City of Peterborough? If we subsidized corporations to the tune of billions why can’t we subsidize spaces that build community?”

Katie Green also pointed out that, “The longevity and success of venues like The Spill is dependent on support from the local government as much as their community of patrons."

Natalie, from Prime Junk, stated matter-of-factly that, “If the City of Peterborough really wanted to support the arts, they should take note of how big a loss this is and make it easier for places like the Spill to exist - not harder.” Just as important as it for community members to act, create, and facilitate events, it is also up to the Peterborough government to realize the realities of downtown, and its shift towards hegemony and homogenous establishments.

This piece is beginning to feel downtrodden, but I would like to finish by coming back to where I started. While this article outlined the worries associated with, and the realities of Peterborough’s music scene at the moment, the fact of the matter is that it still exists. The community hasn’t changed, it has just been displaced for the moment. But not really. As evidenced by the tribute event last week, The Spill’s community is still alive and well. The Spill may be closed, but the individuals, creativity, and love for music and art that went into the Spill still exists in this town. While seeing Dave Tobey as a patron, rather than behind the bar was a sobering sight, the fact that so many people came out to give thanks and donate, really shows that Peterborough music hasn’t lost its strength. As Natalie, from Prime Junk, told me, “There will always be places to play in Peterborough as long as there are people dedicated to making it happen.” Dedication hasn’t been lost by The Spill’s closure. People will make things happen. Maybe now, more than ever.

Black History Month 2021 Art Zine
Subscribe to Arthur's Newsletter
Thank you! Your submission has been received!
Oops! Something went wrong while submitting the form.
No items found.
From Tyler Majer 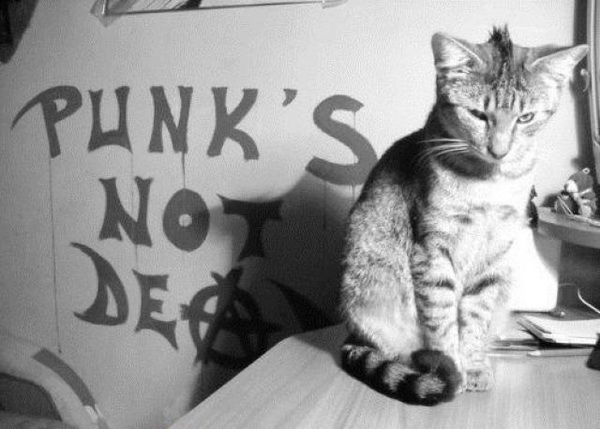 Punk rock's not dead; it's only sleeping (Part 2)
By
Tyler Majer
and
Culture
|
Arts