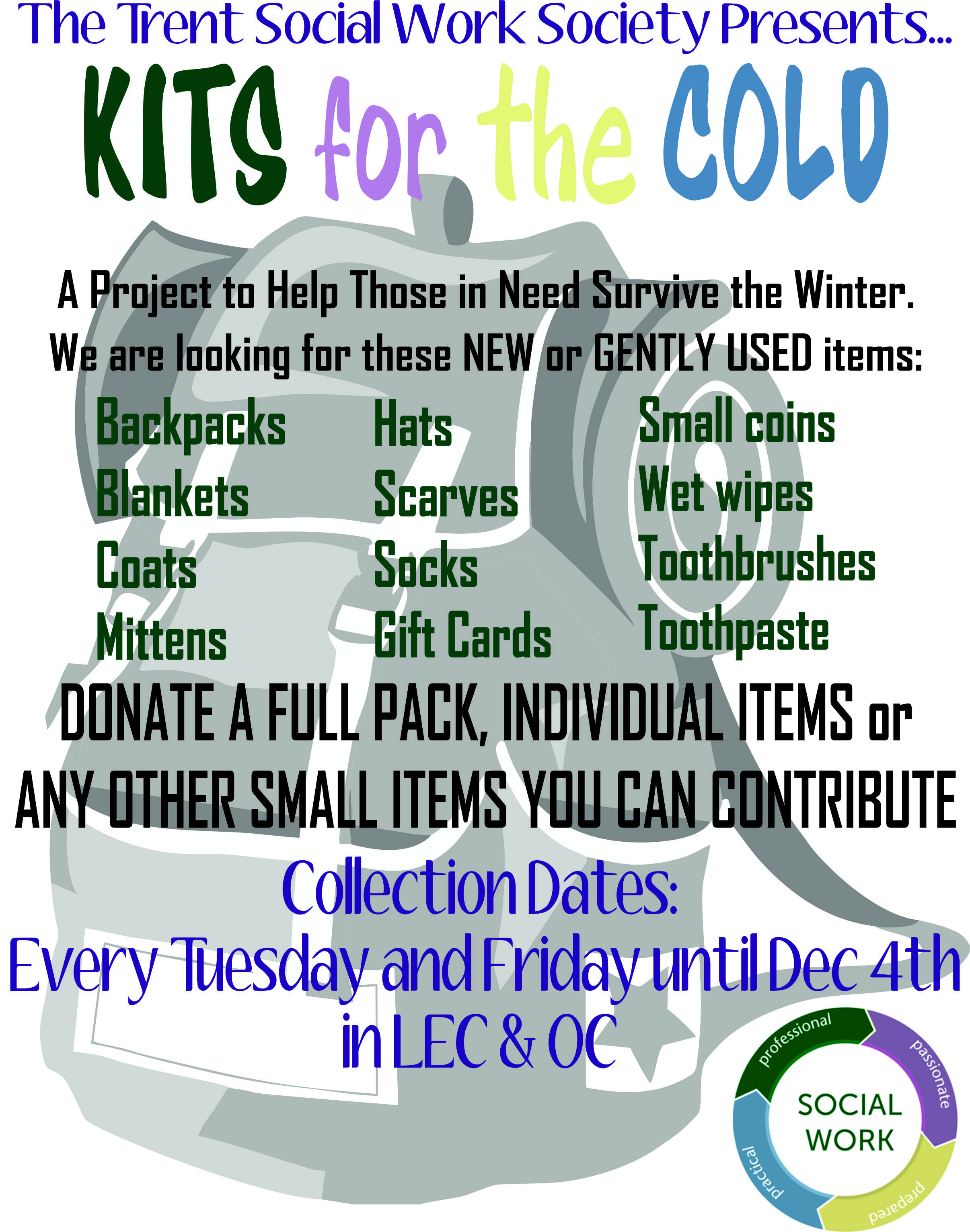 On December 5, students of the Trent Social Work Society (TSWS) will drive around Peterborough distributing backpacks of supplies to homeless people in Peterborough in order to help them battle the harsh winter ahead.

The idea for this particular initiative sparked Taylor’s interest when she saw The Starfish Throwers during last year’s Reframe Film Festival.

Directed by Jesse Roesler and released in 2014, The Starfish Throwers tells the stories of three different people across the world and their collective fight against hunger.

“You never know what can grow from just one little thing,” leading actress Katie Stagliano says.

Now a widely known quote, Taylor and the TSWS have focused on exactly that attitude.

Until December 4, Social Work students will be tabling at Lady Eaton College and Otonabee College every Tuesday and Friday afternoons. During this time, they will be reaching out to the Trent University community and accepting donations.

Donations of gently used (or new) hats, mitts, and scarves are in huge demand! The program is also short on backpacks to hold the donation.

Other ideas include hygiene products, $5 Tim Horton’s gift cards, and small hand warmers, all of which have been common donations among students.

For students who do not have the capacity to donate alone, Taylor suggests getting together a donation within a group of friends. Or to simply do their part by raising awareness to encourage donations by December 4.

Once the bags are packed, members of the TSWS will visit the ‘hot-spots’ of community members who have been forced to panhandle for assistance.

Taylor explained that the team will avoid addressing those who are able to take refuge in shelters, as shelters can often provide more resources of warmth and safety.

For one reason or another, Taylor said, some people are not able to use shelters or rotate between the couches of friends and family members.

These are the people that need the most assistance. In 2012, Toronto documented that 34 of its homeless citizens froze to death on the streets. TSWS want to do their part to ensure that this does not happen in Peterborough.

Social justice and self-determination of services are the core values in social workers, not just charity and academics. Taylor described this winter preparation initiation as “helping people help themselves.”

Taylor has been booking tables and contacting businesses and vendors in hopes of more donations. But she assured Arthur that this is truly a project that the TSWS membership has taken on with passion.

“I would love to include inspirational messages but these are often overlooked [by students],” Taylor added. She is concerned about sounding condescending towards written notes, but believes that a kind word can go a long way. “I just don’t want to do the white-social-worker thing.”

Thinking about minorities and oppressed and abused people is a main topic within social work. Lectures use anti-oppressive frameworks, include intersectionality, and introduce different ways of knowing. Students’ awareness of their privilege within the TSWS has promoted their passion.

This is just the beginning of the initiatives to come from the Trent Social Work Society.

Subscribe to Arthur's Newsletter
Thank you! Your submission has been received!
Oops! Something went wrong while submitting the form.
No items found.
From Reba Harrison