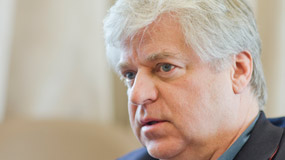 Written by
Pat Reddick
and

Internationally best selling author Linwood Barclay is mid-way through a stay as Alumni Writer-in-Residence at Trent. Barclay graduated from Trent in 1977, and had classes in the same room that we conducted the interview in.

Barclay will be at Trent until November 14, engaging with students, leading workshops, and signing copies of his latest novel A Tap on the Window. The series is put on by the Office of Alumni Affairs and Lady Eaton College.

Before publishing his first novel, Barclay was a humour columnist at the Toronto Star, and also published several works of non-fiction.

He spoke with Arthur about the things he’ll be doing at Trent, the publishing industry, and, of course, Justin Bieber.

Let’s start with what you’ll be doing during the time that you’re at Trent. What workshops and other events are you taking part in?

While I’m here for about a week and a half I’m doing a couple of Writer’s Craft Workshops where I’m talking to anyone who’s interested about how I got to this point, my interest in writing, how Trent helped that, how the professors I had encouraged me, and what a tremendous help it was that Trent then had a Writer in Residence program.

When I was here Margaret Laurence was the writer, so I’ve been talking about meeting her. There’s been a couple of meetings with students and there’s been some nice get-togethers with some of the faculty, and dinner at Lady Eaton College.

On the last night we’ll be doing an event downtown that’s open to the public where I’ll do a reading from my latest book and then one of my professors from when I was here who has recently retired, Gordon Johnston, is going to interview me on stage. I’m hoping there won’t be any math questions. That always worries me.

I’m surprised that Gordon Johnston was one of your professors! I was also an English Major. I’ve had him lecture for a class as well.

Of all the professors I had at Trent, and even the students who I got to know here, he’s the one who is still someone I keep in touch with after all this time and has been a friend, he and his wife, ever since I left Trent.

You mentioned that you’ll be talking about how you got your start doing fiction. I was actually going to ask about that. What made you decide to get your first novel published in 2004?

Well, when my first novel came out, in many ways I was just getting back to what I had always wanted to do. I was writing stories since I was in grade three. Even when I was at Trent, when I wasn’t doing essays or reading the Coles Notes on some of the greatest works of literature ever written, I was writing novels. I had written all sorts of short stories and novellas, but I had written probably about two novels by the time I was 22 or so.

My dream at the time, when I was a student here, was to be a novelist. The only problem was the novels weren’t anywhere near good enough to be published. I still have a stack of rejection slips from some of the greatest publishers in the world saying “Your book is not for us.” I thought “Where can I get paid money to write every day?” so I went to work in the newspapers.

I had a great 30-plus-year career in newspapers, but when it came to do the books that started going out in 2004, I was just doing what I had always wanted to do. The time was finally right.

You’ve done quite well for yourself with your novels. One thing I’ve noticed about many Canadians who hit the big time is they relocate to the United States. That’s not the case for you; you’re still openly Canadian.

I’m not sure I totally agree with that. I don’t know who these writers you’re speaking of who have left Canada after doing well. There are a lot of Canadian writers who have done well who are still here. The fact is I was born in the U.S. and I’m a dual citizen. My parents moved to Canada just as I was turning four. But I feel sort of 75 percent Canadian. The books have done well, and I suppose if we wanted to move somewhere else we could, but we like being here. We can go travel to other places, go hang out for a while, but I can’t think of anywhere else I’d rather be.

Maybe it’s not so much novelists as it is Justin Bieber-types and people like that.

I imagine you have him on speed-dial.

Yeah, Justin Bieber. Just making us proud. I think if we could get Rob Ford to go on a world tour with Justin that would be awesome. They’re both about equally well behaved, just at opposite ends of their career agewise. They’re really quite similar. Our two most famous Canadians are either drunk and on crack or they’re smuggling prostitutes out of brothels. I think we’re making a name for ourselves.

I’m surprised you knew about the Justin Bieber thing.

Hey listen, I’m plugged in, man. I know what’s going on. I’m on Facebook and Twitter all day. I was late getting to Twitter, but I find I’m starting to like it way more. Facebook has been ruined by parents. It was really cool when it started, but now it’s “please share this if you love your daughter. Like, who cares? No wonder people your age are leaving Facebook, it’s just been ruined by people my age who make it awful. Twitter doesn’t have cat pictures. Cats are great. I don’t have a cat, but they’re wonderful I guess. Twitter doesn’t have that, so I think that’s a plus.

I read Fear the Worst and I was struck by how suspenseful each chapter was, they just kept me reading and reading. I was wondering if you wrote on a chapter by chapter basis to see where that took you or if you had a sense of how the novel was going to end when you started writing?

Usually when I start a book I need a great hook, a way into it. Once I have that then I start trying to figure out what it was that made that thing happen. What’s going on behind the scenes? I try to work that all out. Then I usually have a kind of end point, a sense of where the book is going to end up. Once I have that I just start writing because I can’t figure out the whole middle. I just can’t do it.

Once I start writing, the opportunities that exist in the book start to become apparent and then I can do it.

There are other authors who work totally differently and work out every single chapter before they start writing. I wish I could do that! Then it would be like building a model kit. But I can’t do that. Once I have a really solid hook then I’m usually on the way.

There are as many different ways to write as there are writers. When I talk to other writers, particularly those who do the sort of stuff I do (thrillers, crime fiction), we’re all doing it differently. There’s the one who plans everything out, and there are others who just start writing and don’t know what any of it is going to be. I’m somewhere in the middle.

Now I want to talk about book trailers because they are sort of a weird concept for me. You’re taking something that’s totally written and making a little movie for it, except usually they’re done a lot better than movie trailers, in my opinion.

You know, my son Spencer does those through his company Loading Dock Productions. I just have to brag for a moment, he did a whole bunch of videos for Chris Hadfield’s new book, An Astronaut’s Guide to Life on Earth. Most of it was shot at our house. It’s gone viral and it’s almost at a million hits. The one he did for me after a year had about 3,400. But he does really great stuff.

I first asked him if he would do a book trailer for me about four years ago. My idea for it was I’d sit at the computer and talk to the camera and say “My latest book is about such and such.” He said “No, we’re not doing that. That’s awful. We’re going to do something interesting.” The last two he’s done are just great.

I can’t tell you if a book trailer sells one book, I don’t know. But in an age now with YouTube, Twitter, websites, publishers’ websites, and all these sort of things, you feel like you’ve got to do everything you can so people know about this book. They are useful because when I do interviews on TV or radio they’ll use clips of it. I think they’re worth doing, and we tend to spend way too much on ours.

In the field I’m working in where you’re writing a thriller, some of the big name thriller writers are doing them, although I think we were one of the first to start doing it. The early ones are not as good because I’m in them and I’m talking. After a while we thought they would be so much better if I [wasn’t] in them.

Now we make them look like a movie trailer, and you don’t have a writer or a director saying in the middle of a movie trailer “and the movie is about ...” and they’ve just gotten way better since. I wasn’t hurt.

The hope is that someday we’ll have real movie trailers because Trust Your Eyes is in development at Warner Brothers for a film, and Never Look Away is in NBC for development into a series, so we’ll see. It will either happen or it won’t. There are many ways for it to go wrong, but so far it’s been proceeding in the right direction. It doesn’t affect what I do.

I write a book a year and whether someone makes a movie of one of them or not I just keep doing what I do. 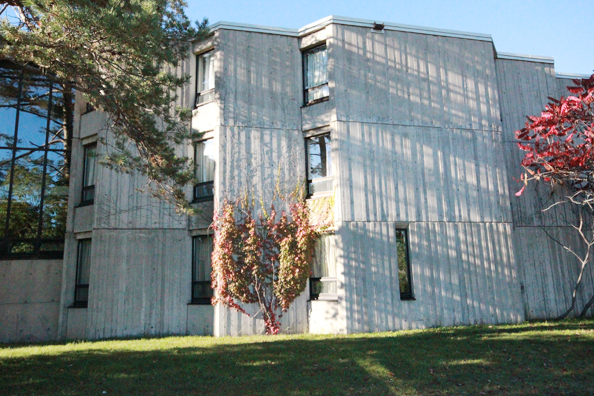 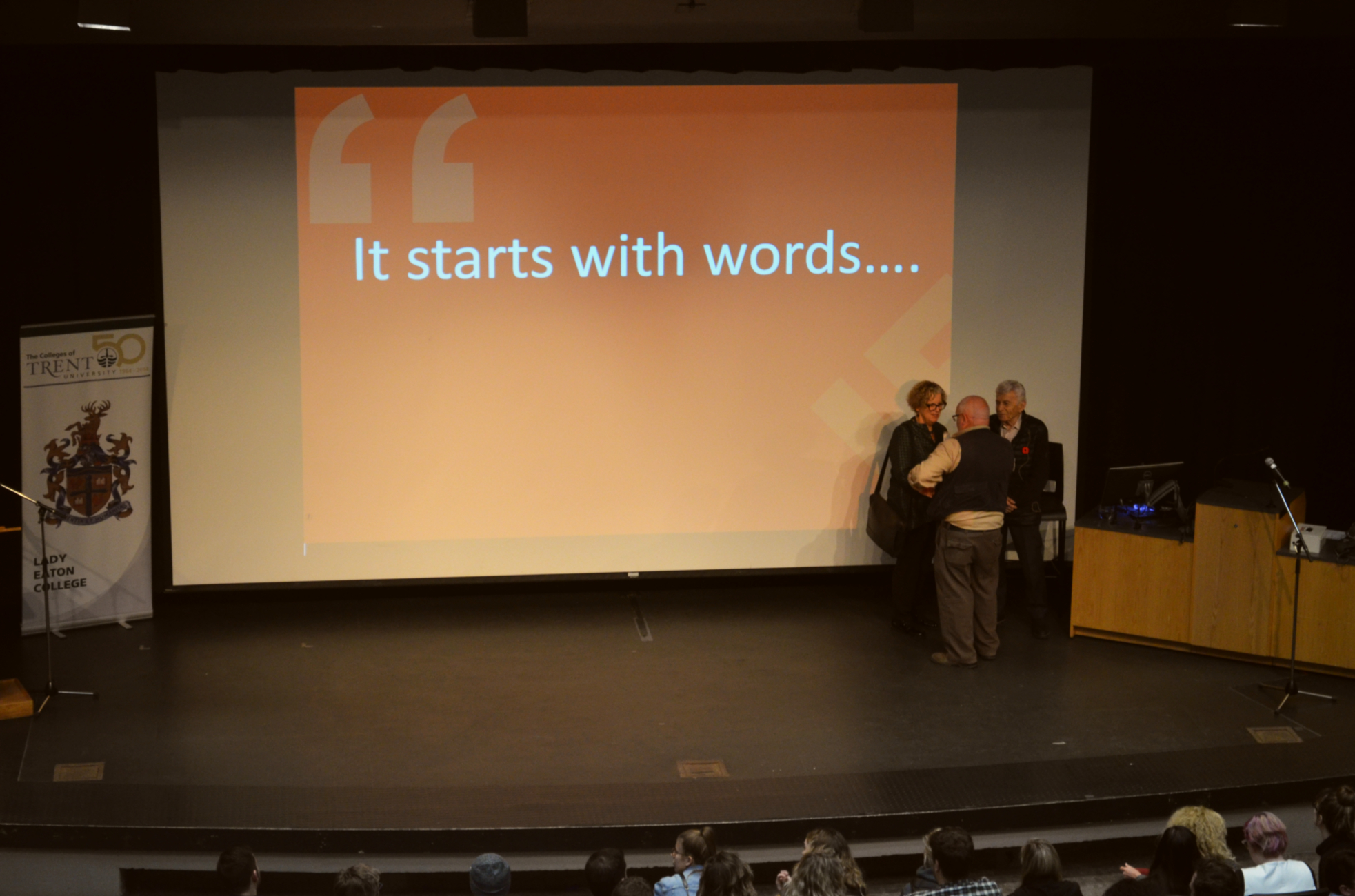