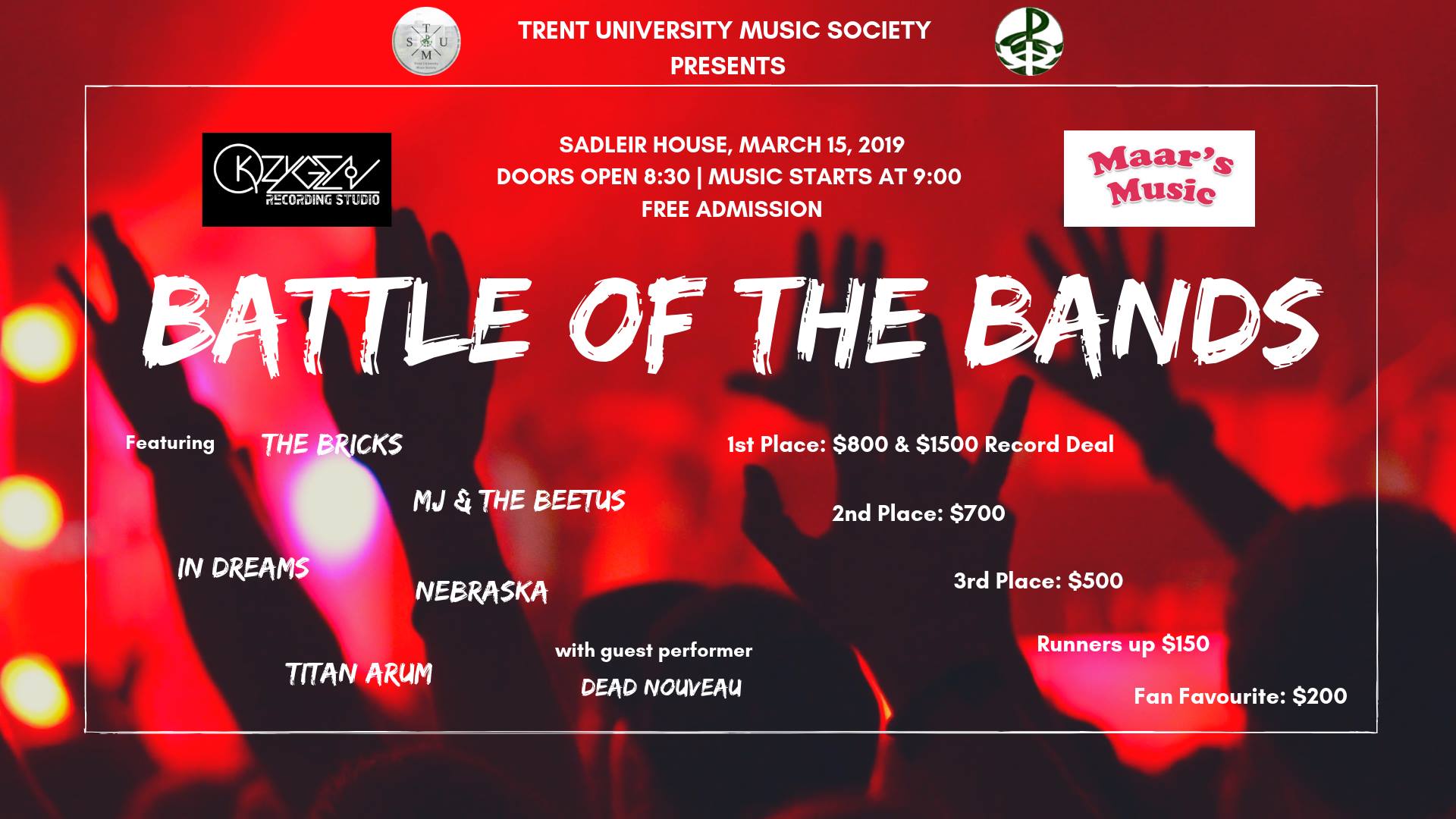 On Friday March 15, Sadleir House and the Trent University Music Society hosted a competition in which five bands played to win a $800 cash prize and a record deal worth $1500 at Okzygen Studios. Around 8:30 p.m., the previous champions of the competition, Dead Nouveau, took to the stage to play a few songs. They played for around 20 minutes, with original high-energy prog-rock tunes and amazing crowd control. It was an outstanding opening, and we eagerly awaited the next band to perform.

In no time at all, the floor went from about two-dozen people after the doors opened, to a full floor by the end of the next set, which featured a classic rock band called The Bricks. With two guitars, a bass, a stage piano, and drums, their sound was heavy and reminiscent of the Rolling Stones. They were also more interactive while playing, urging the crowd of people to get off their seats and come up front and center to truly absorb the music.

M.J. and the Beetus came on shortly after the high-octane performance of the Bricks. With an outstanding buildup on the first song, and a prominent lead guitar and background piano standard throughout the set, this band set a great example on how to incorporate a big-bodied sound into live music.

In homage to the post-punk era, the band In Dreams took on a smoother, yet sonically rich tone, in their songs. It was chill, clean, and a great example of musical variety. The bassist wore a New Order band shirt, making quite clear where their influence derives from. Based on my own experience of seeing New Order live, I imagined myself returning to that scene and hearing that same music.

The floor turned to the next band by the name of Nebraska, who played with bass-heavy, hard rock/funk tunes. The energy was ridiculous, to say the least. The guitarist’s use of wah and distortion pedals, combined with the bassist’s punchy strums and the drummer’s high-intensity patterns, created an earth-shattering, untamed sonic effect. They effectively utilized crowd control as well, walking down to the crowd to shred their guitars on the solos, not missing a beat.

Finally, the heavy metal band Titan Arum concluded the performances with some epic dark ballads about animals, including one about Laika, the Russian dog sent into space in 1957, one of the first animals to do so. The music was wicked and inspiring – at one point there was even a mosh pit that I happened to find myself in during one of their closing songs. The best way to describe it was the unleashing of the rock n’ roll energy built up over almost three hours.

With five incredible performances in the books, the judges adjourned to deliberate. Dead Nouveau returned shortly before the announcements were made, playing eccentric covers of “Another One Bites the Dust” and “Alligator Wine,” along with one of their original tunes “Sincerely, The Angel on Your Shoulder.”

Afterwards, the moment we all waited for arrived. The ‘fan favourite band’ prize of $200 was awarded to Titan Arum. In third place, winning $500 was M.J. and the Beetus. The 2nd place prize of $700 went to Titan Arum. Finally, the grand prize of $800 and the $1500 record deal went to the hard funk/rock band Nebraska. With a great deal of cheering and congratulations, the band was called up to perform an encore song.

I was fortunate enough to set up a post-show interview with the winning band, Nebraska, which consists of Darcy Brown, Sam Mitchell, and Carter Riddall. Mitchell was one of my classmates in the Experimental Music Production course at Trent University, and at one point we got to perform together. In the interview, he claimed that due to one of the other band members being unable to perform (for reasons unknown), he learned the bass section to each song performed that evening within the span of two days. The members of the band met in elementary school, with their first ‘real’ show being in the 10th grade under the name Paper Cities. The band cited Rage Against the Machine as one of their primary influences, as well as Tool and Queens of the Stone Age. The band is hoping for great things to come from their record deal and claims that they will be practicing hard to ensure that the time is spent effectively. Sam Mitchell contacted me shortly after to state that the band will be changing their name to “The Oddities.”

Overall, the show was a resounding success. Each band gathered a great amount of attention and praise from the crowd, and resoundingly reinforced the music scene in Peterborough. I would heavily encourage any music fan to come to next year’s show. 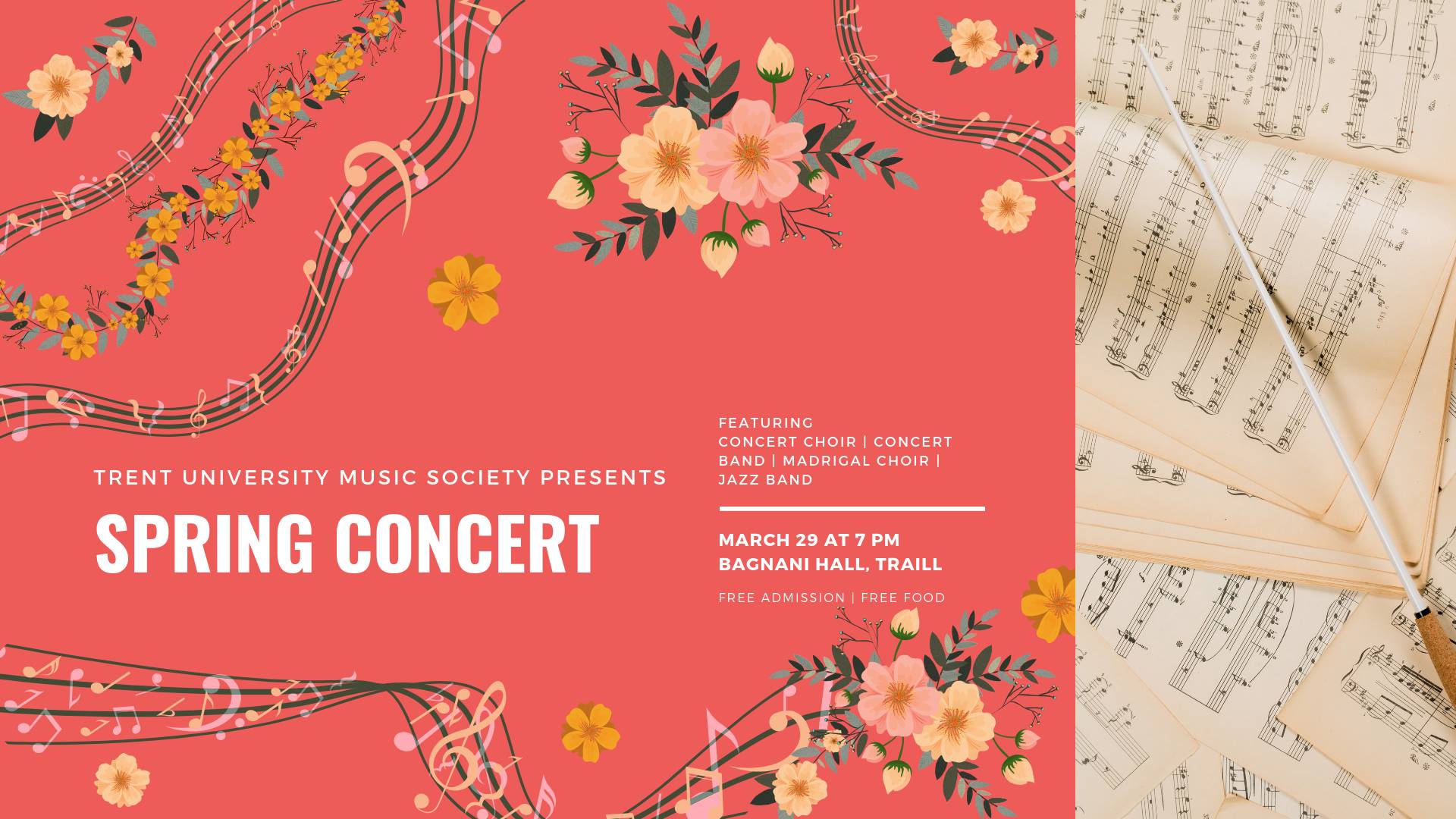 TUMS Annual Spring Concert: A Melodic Evening at Traill
By
Sogyal Samdup
and
From Spencer Wells