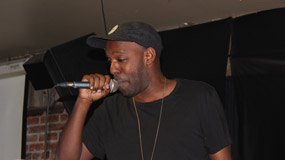 Shad is a hip-hop artist hailing from London, Ontario. Born in Kenya, he is now a well-known, Juno award-winning Canadian musician.

He is known for his socially conscious content, often depicting concerns regarding politics, history, and race. I got the wonderful chance to speak to Shad over the phone. I was initially full of butterflies, and didn’t know what to expect.

Two minutes into the conversation, and it was like speaking to someone I’d known for a while.

Shad’s demeanour and conversational tone was similar and reminiscent of his attitude towards and within his music: laid-back, relaxed, and quite intelligent.

We exchanged notions on what it means to be a hip-hop artist, and how honesty plays a role in music. Read on for an in-depth exchange with Shad!

What is the most influential time period where you feel like what you were listening to really shaped your outlook on music?

In high school I listened to Outkast, Lauren Hill, and Common. You know, I’ve always listened to everything, but those are some examples that stand out.

Who are some musicians you’re currently listening to?

Most recently… Kings of Convenience, and Kanye.

Slam poetry and hip-hop often overlap. Have you ever slammed or been interested in spoken word poetry?

I never have, actually. I mean, I’ve never really gone to any slams, but what I do and what they [slam poets] do is quite similar.

So, back in 2005, your debut album This is Over was recorded with prize money! Do you think you’d be where you are now if you hadn’t been able to record your album at that time?

Definitely. That was one of those things, you know. It was a very fortunate opportunity, and, yeah, a catalyst in a lot of ways. It helped me make my first album, and helped me gain confidence.

Was your family supportive of your music growing up?

How do you feel about social networks such as Twitter and Instagram? Listening to your tracks, I get mixed messages. Sometimes you criticize the excessive use, and at other times, it seems like you have no problem with it!

Hmm… how do I feel about them… you know, I think that people my age like social networking, because it’s fun, but we struggle to take it seriously. I think that’s probably why we joke about it. People my age use it for fun, and we hesitate to take it so seriously, it’s weird. Facebook is a multi-billion dollar company and it’s a revolutionary company at this time. Just taking Facebook as an example, half of Canadians are on Facebook. It’s the most revolutionary company in the history of the world. I think when you have a strong memory of what it was like pre-Internet, which people my age do, we still struggle to take social networking seriously, in a way. It becomes a funny thing to reflect on because it’s a big part of my life and it’s a big part of history, and I recognize that, [but] at the same time it’s this thing that’s hard to take seriously because we remember what life was like before it. You know when you’re like, “Oh yeah, I was reading that on Facebook,” there’s this sheepishness that comes with saying that, even though obviously that’s how we get information now. I think it’s funny.

Your lyrics focus a lot on social justice. Have you received any criticism or backlash for shedding light on some deep-rooted issues that some people might like to deny?

You know, I don’t think I’ve ever gotten a ton of backlash really because, I don’t know, I guess I’m lucky. But it does exist – obviously not everyone likes what I do.

Was it difficult writing “I’ll Never Understand”? You mention the Rwandan Genocide in a few of your songs. Do you think there is a lot of ignorance in terms of what happened?

Yeah. Well, the song started with that poem that my mom wrote and it started with just getting her to record it. From there, it was the process of turning that into something else. I don’t think it was quite hard. It was actually pretty rewarding, the process of making the song. Of course, a lot of that process involved my mom and her writing, which she did on her own. I can’t speak to how hard that was, but I imagine [it was]. I think what happens with music, or at least with hip-hop, is that you share your story, your experience, and I think what you can hope for is that it humanizes that story, so people take it out of the abstract historical context and can then put a face and voice to it, you know? It humanizes it, and allows people to understand it not just factually, but emotionally. It puts it in terms that people can relate to.

Honesty and raw emotion often makes the best music and poetry. Would you say that’s an attribute in your work?

Yeah, I try. I think there should be an emotional quality to music. There are just so many lyrics, it’s become more cerebral than emotional. The challenge is to come from someplace of honesty, but at the same time, also have a level of thought that is being applied to that on those feelings. But yeah, absolutely. I think music is about connecting emotionally and you gotta try and get there.

You know, a lot of media has referred to you as this “breath of fresh air.” Do you think that you’re different from other hip-hop artists, and if so, why? Is this intentional?

Yeah, I think I’m different, but I think I’m not anymore different than anyone who cares and tries to do something that is unique. I think “the breath of fresh air” would be more of a convenient way of positioning a story for a writer. I do try to offer something that’s unique to me, what interests me in music. I appreciate that at the same time.

Your track “Fam Jam” is about being an immigrant in Canada. How was it writing about that? I’m sure that many first generation kids, or kids who were born somewhere else but grew up here in Canada, can relate to it. I know I did!

Yeah, that was a really fun song to make. In terms of trying to bring something that was unique to me, I think that was where I felt like I couldn’t think of too many other examples of songs that speak to that.

Right… I noticed it had a very optimistic feel to it as well.

Yes. I think that was pretty deliberate because I knew that I wanted to, like, lyrically take the song to certain places. That track was a complicated one emotionally. I wanted to be joyful and celebratory, but at the same time, I wanted to talk about some of the nuances of that experience.

Do you think that mainstream hip-hop has lost sight of what it was originally meant to be? Is it strange to you that hip-hop artists who rap about important topics are now considered “fresh” and “different”? Isn’t that kind of ironic?

Yeah, we live in a very strange musical culture. I was talking to somebody last night, you know, and we were talking about how you make good music, and you get elevated, right, to the point where you have money and you’re a bit apart from mainstream society. Then what are you supposed to do as an artist, as someone who is trying to, like, speak to the culture?

Right! Because in a way, you’ve separated yourself from mainstream culture…

Yeah! You’ve been separated from that. I think that it’s a weird by-product of our culture.

So, would you defend artists who are rapping about what their lives are like right now? They’re still being honest, even if they’re rapping about money, parties, and girls.

Well, yeah, and then it perpetuates this cycle. Okay, so people are talking about how their life is, like, way up in the stratosphere, then what do up and coming artists want to do? What do they try to emulate? Of course… just that! So it’s funny, it creates a funny situation. You know, I think that’s one strange aspect amongst many about making music in our culture.

You use beats, but also instrumental tracks. Do you think that it’s important for hip-hop artists to explore their options in terms of the musical integration with their words?

Yeah, I think that that’s one thing that’s always interested me, and I can’t really say what other artists should do, but I think everybody who makes music, makes it because they love it. They want to, and should explore different things if they want to grow as an artist.

What advice would you give to an aspiring hip-hop or spoken word artist?

Hmm, I don’t think I would have anything unusual to say. My advice is just always keep doing what you do because you just get better and better.

What do you hope your listeners will take away from Flying Colours?

A sense of hope.

Black History Month 2021 Art Zine
Subscribe to Arthur's Newsletter
Thank you! Your submission has been received!
Oops! Something went wrong while submitting the form.
No items found.
From Yumna Leghari