“What are You Teaching Next Year?”: A Window into the World of the Contract Instructor

It happens like this: the academic term is winding down, and a student, realizing they had unexpectedly learned a lot in a class they’d maybe taken because it was required or because it fit their schedule, asks the professor, “What are you teaching next year?”

The thing is, the professor isn’t really a professor, at least not outside that particular classroom. They are a contract instructor, hired on a course-by-course basis to teach for the university, unlike their tenure-track colleagues, who hold permanent positions and usually play a role in running their department – including hiring contract instructors.

Contract instructors aren’t invited back or even expected. We simply watch the university web page for job postings, which are typically for one course, lasting either four months or eight months, and apply for them. The postings usually go up in June or July, after students have signed up for their courses, but sometimes can be as late as August for a course that starts in September.

The tenure-track faculty in the department who are doing the hiring typically have by-and-large the same education the applicants do, making them effectively amateurs in human resources. Job postings for some very general courses will elicit dozens of applications, while courses in highly specialized areas get a handful, and tenure-track faculty have to determine, usually on a tight timeline, who gets the gig. Interesting decisions get made.

Luckily contract instructors at Trent University Peterborough are represented by a union, Canadian Union of Public Employees (CUPE) Local 3908 Unit 1. The union negotiates a collective agreement with the university that effectively defines the terms under which individual contract instructors get hired and work in the various departments. The collective agreement tames some of the most extreme excesses of the hiring process.

For example, while the university obviously wants people who know a subject well to teach a course in that area, departments can’t hire someone who has published very slightly more on a given topic over a person who has taught the course well in the past. A department can’t hire someone the permanent faculty enjoy hanging out with over someone who has taught the course before. And so on.

CUPE uses its members’ collective bargaining power to make contract work less exploitative and more predictable, but the central fact remains that contract faculty, no matter how experienced and established as educators in the university, are effectively let go at the end of each term, and may or may not be hired again in a few months or weeks.

Why does it work this way? Because universities like flexibility: it allows them to offer fewer jobs if there is a dip in enrolment or a funding cut from the province, and to profit more from increased enrolment by hiring contract faculty to teach the extra classes rather than creating permanent positions. Universities can maximize the benefits of the education business and minimize the risks, on the backs of their temporary teachers.

The effect of this on contract instructors is obvious: it’s incredibly stressful to live with that uncertainty, watching and waiting for your job to be posted, and then having to re-apply for it, every few months, well into a teaching career, not knowing if you’ll be able to piece together an income from the contracts you get. It affects your health, your relationships with your colleagues, with your field of knowledge, with your students, and often with your loved ones.

And yet, contract instructors contribute to life on campus in myriad ways; they sit on communities, they mentor and advise, they innovate in their teaching and work at the cutting edge of their fields. They deserve more predictability in their employment, just as students deserve to know if they will be able to take another class with their favourite professor next year.

On Solidarity: Or, CUPE in the Community
By
David Tough
and
From David Tough 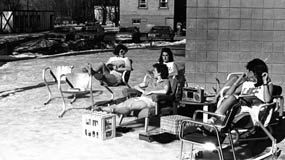 Against All Odds, Contract Instructors Work at the Cutting Edge of Their Fields
By
David Tough

Who Benefits When a Health Plan Pits Members Against Each Other?
By
David Tough
Related

On Solidarity: Or, CUPE in the Community
By
DavidToughCUPE3908Unit1

Against All Odds, Contract Instructors Work at the Cutting Edge of Their Fields
By
DavidToughCUPE3908Unit1
News
|
Campus