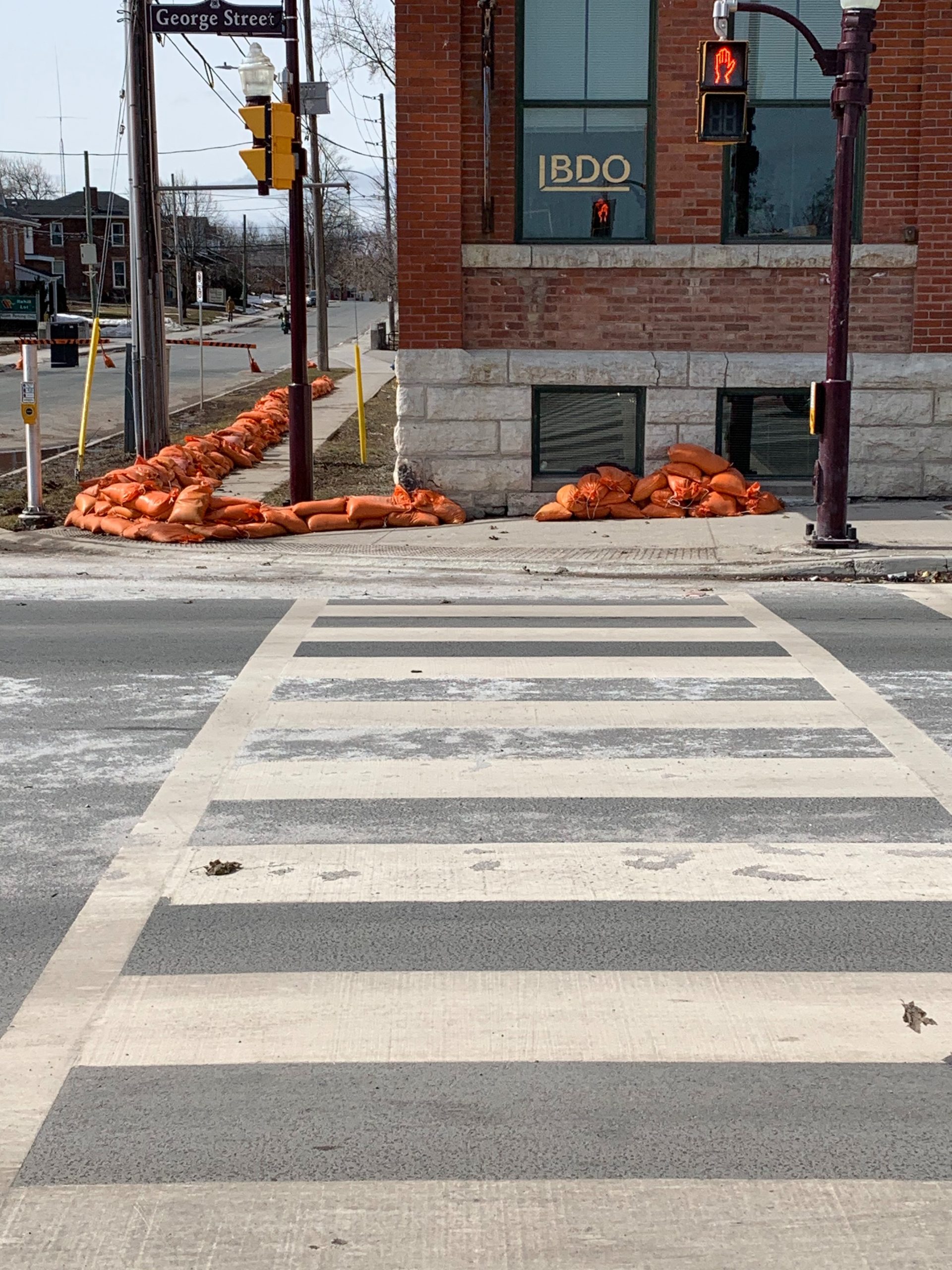 Peterborough has a history of flooding, which was showcased this past Thursday at the intersection of George and Dalhousie, as reported in the Peterborough Examiner. On Saturday, there was evidence of the flood, as a building at the intersection of George and Dalhousie was being pumped, and an empty parking lot where Kings Crossing once stood was flooded. A resident in the area told me the flooding was knee deep where I was standing. On Tuesday, a section of Nassau Mills road was flooded as a culvert was overwhelmed. On Monday, City Councillors talked about Bethune Street development to ease the impact of flood water.

The history of major floods in Peterborough was on full display in a General Committee Meeting. There were concerns about cost overruns for the project. However, this cost did not include a linear park. Other than parks immediately on the Otonabee river and a few trails downtown, Peterborough appears to lack the pedestrian and park spaces that are famous in European cities and in Ottawa. In the book Eyesore or Ornament: A Brief History of Jackson Creek by Meredith Carter in 2005 there is a growing desire to daylight Jackson Creek, which will help reduce fragmentation, improve the natural beauty, and reduce flooding. In the article "Deculverting: reviewing the evidence on the ‘daylighting’ and restoration of culverted rivers" it was argued that culverts can be blocked (Wild, T., et al, 2011). This was the case as reported in the Peterborough Examiner.

While it was Bethune Street that was being debated, it is important to note recent flooding. In Peterborough’s Climate projections made in 2018, winter and spring were projected to get significantly wette,r which means flooding could increase due to ice blockages. In the General committee meeting, 2004’s flooding was referenced. The cost increase to the project on Bethune street of $18.7 million was supported reluctantly, because there was Provincial and Federal funding attached to the project’s completion date. Staff said in response to questions about the project that there are no nice to haves for the project (without the linear park) and it is key to adaptation. Due to the size of the project, any cost increase in materials can be millions of dollars. The other major topic was the closure of the Northcrest Arena. The major concern was that the season would be lost no matter what, and there is uncertainty in whether a proposed arena at Fleming College will be funded while there is a shortage of five ice pads. The decision was to close the arena due to potential future costs, in addition to the $1.45 million needed to keep it open.

Near the end of the meeting, an update about Covid19 was given, where there were no cases reported in Peterborough. The number for Peterborough Public Health for people to call is 705-743-1000 ext 401, if they have concerns regarding Covid19. Since then, according to Kawartha Now, Peterborough Sport and Wellness Centre, the Peterborough Museum and Archives, the Peterborough Public Library, the Art Gallery of Peterborough, and community arenas have closed. In addition to this, Trent University will be moving all classes to an online format on Wednesday.

The next City Council meeting is scheduled for March 23, 2020 where Bethune Street redevelopment will be a major topic, along with the Farmers Market and arena. It is unclear whether or not the meeting will go ahead as scheduled.

Municipal Parks and COVID-19
By
Robert Gibson
and
Culture
|
Arts

The Wait is Over, The Environmental Advisory Committee is Back
By
Robert Gibson
Related