BWXT Nuclear Energy Canada's Beryllium emissions stack directly across from the playground of the Prince of Wales Elementary School on Monaghan Road. Photo courtesy of CARN.

More Poison From the Plant

BWXT Nuclear Energy Canada's Beryllium emissions stack directly across from the playground of the Prince of Wales Elementary School on Monaghan Road. Photo courtesy of CARN.

That licence allows BWXT to significantly intensify their radioactive pollution across the street from the Prince of Wales Elementary School on Monaghan Road.

Pollution will intensify by adding uranium fuel processing to their current operations, known as pelleting.

Dr. Sandor Demeter, one of the five nuclear safety commission members who wrote the decision, dissented by arguing, “BWXT has not provided adequate justification” for pelleting, “adding radiation doses and U02 [Uranium Dioxide] air and effluent emissions in a site which has an adjacent vulnerable population, is not acting in an abundance of precaution.”

“On social trust, the proximity of the school and the concerns from local residents are also predominant factors for not allowing pelleting in Peterborough,” wrote Dr. Demeter.

Pelleting is the cooking of powdered uranium, at 1650 degrees centigrade, to form ceramic pellets that go into nuclear fuel rods.

The factory will process over 150 tonnes of uranium per month to fuel half of all nuclear energy in Canada.

Pelleting means the factory will be continuously (24/7) spewing many trillions of fine uranium dust particles up their stacks into the air and down the drain into the waters of Little Lake and the Otonabee River.

The danger of getting sick from uranium exposure is two fold: it is a toxic heavy metal and radioactive.

As a toxic heavy metal, exposure to uranium can cause cancer, liver and kidney disease, and immune system problems.

If you ingest or inhale an alpha radiation emitting particle of uranium, it can lodge in the lungs or the brain and there it can continuously irradiate the natural replication of cells.

Queen’s University Professor of Medicine, Dr. Cathy Vakil, explains “if you inhale a particle of uranium, the cells right close by are damaged. And if the DNA is damaged, you are at risk for cancer.”

But according to BWXT, the level of risk associated with chronic low dose radiation exposure from the plant is ‘negligible’ and comparable to natural background radiation.

BWXT also claims that the safety of the community, the environment, and their employees is their number one priority.

The local group Citizens Against Radioactive Neighbourhoods (CARN), has worked over the past year to lobby politicians and educate the public on the dangers of pelleting.

The group contends that increasing pollution from the plant builds on a toxic legacy.

BWXT, an American nuclear weapons manufacturer, purchased the factory from General Electric in 2016.

Peterborough was nicknamed “The Electric City” because General Electric had been a major employer for over a century, but now the factory is synonymous with slowly poisoning workers and community members with deadly toxins including Polychlorinated Biphenyls (PCB), asbestos, and uranium.

In addition to uranium, BWXT’s current operation releases beryllium from a stack directly across from the school’s playground.

The European Organization for Nuclear Research (CERN), funded by 20 European Union member states recognizes beryllium as “the most dangerous of industrial metals.”

BWXT, the CNSC, and the Peterborough Medical Officer of Health have concluded there is no evidence to prove that school children are at risk of inhaling beryllium from the stack that releases it across the street.

However, the Kawartha Pine Ridge District School Board has written to parents to express that they share Peterborough’s Medical Officer of Health, Dr. Rosana Salvaterra’s “concern that the actual amount of beryllium appears to be rising, even if it remains within acceptable levels.”

It is a very old and familiar story playing out in Peterborough-Nogojiwanong; the government and industry are assuring people that releasing more toxins into their environment is safe, and not everyone is buying it.

Locating a uranium processing factory next to an elementary school is such a huge flex on the part of an industry that is struggling with their public image and is financially incentivized to claim there is nothing to worry about.

BWXT (formerly General Electric) is asking parents to trust them with their children’s future.

It does not inspire confidence that BWXT has been named as a co-defendant in a class action lawsuit after Zahn’s Corner Middle School in Ohio had to shutter after it was found that children were being exposed to dangerous levels of highly-enriched uranium and neptunium 237. Parents of the school community believe a number of cancer deaths of students may be connected to the contamination.

Is it worth possibly sacrificing children's’ health in return for the benefits of keeping the lights on with nuclear energy?

Now that BWXT can legally carry out its expansion, there are three ways the struggle may play out in Peterborough-Nogojiwanong;

2. People opposed to BWXT can escalate through direct action and pressure campaigns to find leverage and get results.

3. People who can afford to move will move, which would be an individual solution to a collective problem.

If you hold it to be true that your duty is to protect children and the Earth, in the matter of BWXT, will this belief be a lullaby or clarion call to action?

More from Arthur on BWXT:‍

The Radioactive Colonialism of BWXT‍ 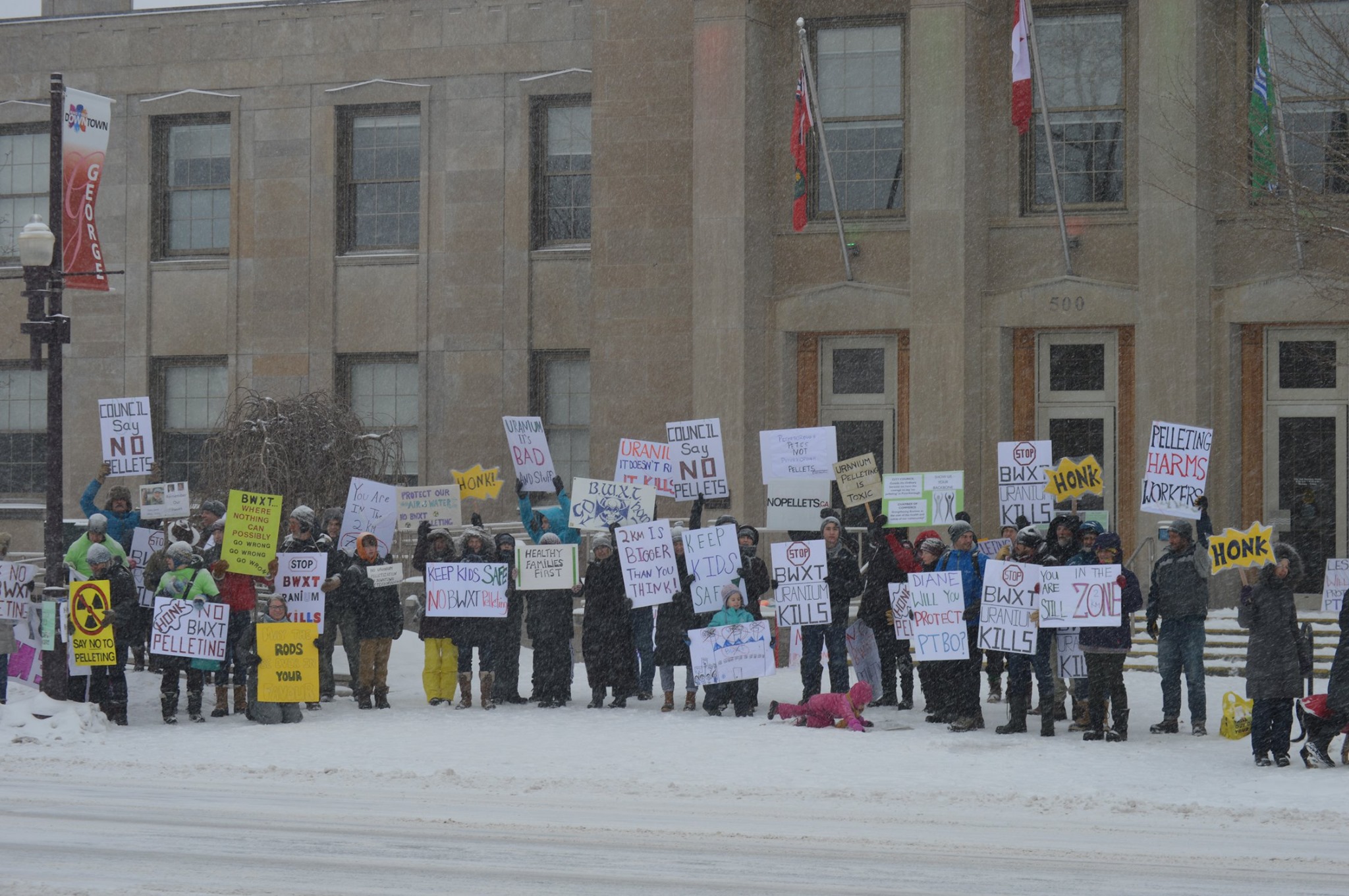