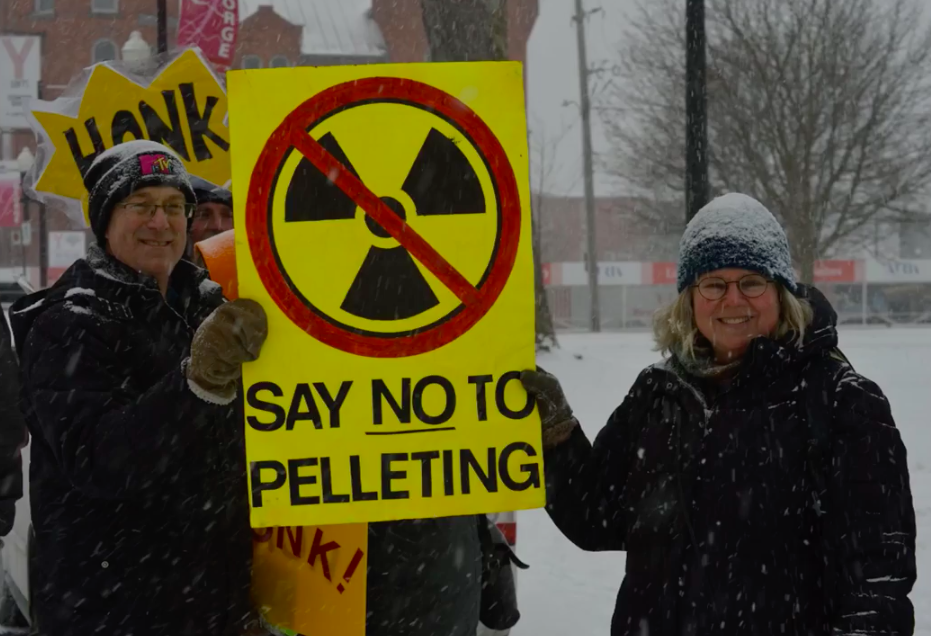 Jane Scott (right) participates in the “Pickets Against Pellets,” which have been running in front of Peterborough City Hall almost every Saturday afternoon of 2020 so far. Scott is a co-founder of local action group Citizens Against Radioactive Neighbourhoods (CARN) Peterborough which has been organizing against BWXT Nuclear Energy Canada. BWXT Nuclear Energy Canada is seeking a 10-year license renewal from the Canadian Nuclear Safety Commission (CNSC) to move its uranium processing operations from Toronto to Peterborough. Photo via CARN on Facebook.

Written by
Zach Ruiter
and

Jane Scott (right) participates in the “Pickets Against Pellets,” which have been running in front of Peterborough City Hall almost every Saturday afternoon of 2020 so far. Scott is a co-founder of local action group Citizens Against Radioactive Neighbourhoods (CARN) Peterborough which has been organizing against BWXT Nuclear Energy Canada. BWXT Nuclear Energy Canada is seeking a 10-year license renewal from the Canadian Nuclear Safety Commission (CNSC) to move its uranium processing operations from Toronto to Peterborough. Photo via CARN on Facebook.

Arthur: Can you describe the political landscape of BWXT Nuclear Energy Canada’s 10-year license renewal, and their plans to cook uranium powder into pellets in Peterborough?

Jane Scott: It is really bizarre how City Council is behaving; only three of them came to our information night, and the rest of them seem to be getting all their information from BWXT.

Arthur: There was a sign at one of your pickets that read “More Poison from the Plant”.

JS: Peterborough has over 127 years of legacy pollution, and we have an ongoing problem with PCB plumes contaminating Little Lake. It is wrong to add any more pollution because the effects are cumulative on a population.

Arthur: BWXT has a stack that emits toxic beryllium across from the Prince of Wales Public School - is that a concern?

JS: The beryllium stack is right next to the sidewalk where parents roll their babies in strollers, and take their kids to school everyday. That is the building where there would be more uranium dioxide stacked kitty corner to the elementary school, and kids and pregnant mothers are really vulnerable to radiation.

Arthur: According to BWXT, the operation used enriched uranium in Peterborough until the 1980s at the GE site. Does that surprise you?

JS: No. In 2009, they got permission to produce fuel bundles made of Low Enriched Uranium, and that was a real concern to parents.

Arthur: We asked BWXT if they had plans on using enriched uranium in Peterborough within the next ten-year operating license, and while they said they had “no plans” on it, they wouldn’t rule it out.

Arthur: BWXT was named in a class action lawsuit in Ohio. What happened there?

JS: They failed to adequately protect people and the environment. A school became contaminated with enriched uranium which had to close down, and they are suing because of that.

Arthur: The Peterborough Examiner ran an editorial stating that pelleting in Peterborough will be safe because the Canadian Nuclear Safety Commission (CNSC) has said so.

JS: The CNSC has a well deserved reputation as a captured regulator, and we have a recent history of that with the former Shield Source Incorporated tritium sign factory at the Peterborough airport. For more than a decade their emissions monitoring equipment was miscalibrated, and the CNSC didn’t even notice; they were spilling out vast quantities of radioactive tritium.

Arthur: Mayor Diane Therrien was absent for a failed motion at City Council to ask BWXT to not do pelleting in Peterborough. Where do you think the Mayor stands on the issue?

JS: In April we had a meeting with her, but other than that we have had little results. I almost feel like I am living in a Simpsons episode with regards to City Council.

Arthur: What is next for CARN?

JS: We will continue our pickets and work to make the politicians realize BWXT’s license application is a really bad idea for Peterborough. We don’t want to go down the road like Port Hope, where they are spending billions of dollars to clean up the soil. It is not the kind of Peterborough I want to live in.

Arthur: The science is contested; the industry says there is nothing to worry about. Do you ever doubt your position?

JS: No, I don’t, because you would have much higher emissions of a radioactive heavy metal; uranium dioxide is insoluble so it can stay in your lungs for years before it damages the sensitive tissue and DNA.

Arthur: What would happen if the CNSC approves the pelleting?

JS: There is going to be a big uproar because it is almost criminal to do that next to a school.

Arthur: If Mayor Therrien doesn’t oppose the proposed pelleting in Peterborough, are you considering challenging for that position?

JS: Yeah for sure. I have to believe there is something we can do about it.

This interview has been edited and condensed for clarity.

Arthur has reached out to Mayor Therrien numerous times without success. We continue to invite her to do an interview.

Correction (January 30, 2020): The previous version of the article ran a headline that suggested that Jane Scott was considering running for Mayor of Peterborough against Mayor Diane Therrien. This was a misinterpretation of a joke. The editors apologize to Ms. Scott for any inconvenience caused by this misleading headline and appreciate her understanding in correcting this mistake.