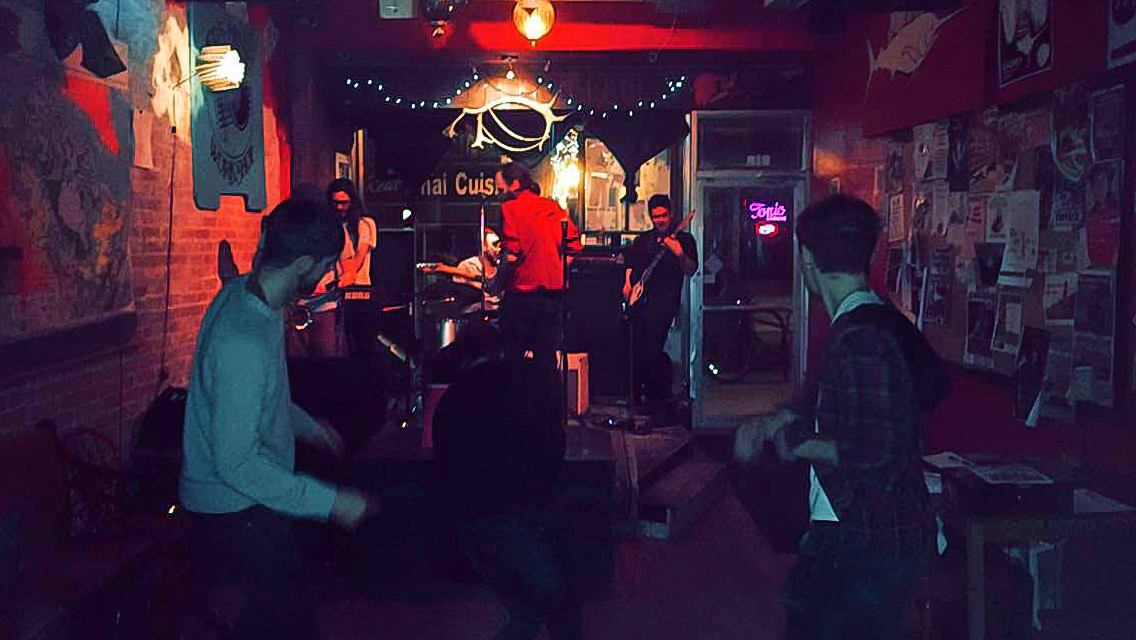 No Pussyfooting: one of the greatest live bands in Peterborough

Writing about No Pussyfooting was a personal challenge I set for myself, having never written a music piece before. I was determined to do this only because their music moved me. I have to say, they are hands down my favourite band in Peterborough. The band is comprised of Rob Hailman, lead vocalist and guitar, Jeff Curtis on drums and backup vocals, saxophonist Jon Dowdell, bassist Mike Grundy, and Luis Pavon on synth.

You can catch the next No Pussyfooting show at The Spill on April 28th with Goodnight Sunrise.

How was No Pussyfooting conceived?

Jeff: We are coming up on our ten year bandiversery this summer.

Rob and I were in another band together called The Dirty Cop Choir, but when we couldn’t reach a consensus of what we wanted to be anymore, him and I realized we had the same motivations and a similar musical taste. So, we decided our whole ethos would be No Pussyfooting. That’s what we wanted to do as musicians, so we formed the band as a manifesto in a way.

Rob: No Pussyfooting is a demonstrative imperative, it’s instructions to us (the band), not the audience.

Jeff: It’s also a nod to Fripp & Eno’s album No Pussyfooting that was released in 1973 because we’re fans of that.

Jon: My high school band Aphrodite's Bodice experienced success, having opened for the Allman Brothers. Their music has more of a mainstream sound, and I was looking to move away from that.

How did you guys find the other band members?

Jeff: Jon came a bit later. Our original lineup of the band was myself, Rob, and a woman, so we were a three piece acoustic guitar band, and she sang backup (vocals). When that didn’t end up working out, we added Mike Grundy because we needed a bass player, and we were close with Michael because our old bands played together. We were operating as a four piece without John for a while. Then we lost our other guitar player and were a three piece for a while.

Jon: I was looking for some kind of music in Peterborough. I was 19 and I signed up for a Cultural Studies course, Performance and Production taught by Michael Morse.

Jon: And it was the only course at Trent where you could play in a band. You put together some bands, wrote some songs, and recorded in Beau Dixon’s studio. The final thing for the course was a concert, and it was the only course I could sign up for where you could play music. Michael Grundy, was also taking the same course, and that’s how I was introduced to No Pussyfooting.

Jeff: I was the one who invited Jon to a rehearsal, because I met him at the old Nano Girl House on London Street back when that was a thing. I saw John’s saxophone case open, and No Pussyfooting was always looking for a brass player. I immediately needed to know whose saxophone that was-

Jon: My first interaction with Jeff was, “whose saxophone is this! You, come to my band’s rehearsal after this.” We jammed and got along right away.

Rob: Right away, when we played a couple of songs, we asked him to leave the room and decided we were going to ask him to join the band. It really was love at first sight when it came down to the man, he fit the sound and picked up the songs right away and was a great person to get along with too.

What are your musical influences?

Jeff: We were really listening to a lot of The Velvet Underground, a lot of Lou Reed’s Street Hassle. That’s when we got into Hound Dog Taylor and the House Rockers. The Son Seals Blues Band. Nick Cave and the Bad Seeds’ The Carny was always fun to cover, and Three Dollar Glockenspiel off the Nasty Brutish & Short EP was an homage to that waltzy sound.

Rob: Shortly after Bob Dylan went electric, the first couple of electric albums. That music is incredible, the concert where he did it is amazing.

Jon: Stuff like Little Richard and really fast jazz, because that’s what I’ve been learning since I was 14.

How would you guys describe your sound?

Jon: We are somewhat the founders and developers of twist core in Peterborough, but I think that really refers to influences of earlier punk, blues and doo- wop, kind of an older feel the twist summarizes. A lot of fun, something you can dance to, those blues changes, but I always described it as punk and blues with bebop.

Jeff: That has become a running joke for a while, as much of that is a joke it’s representative of the idea was a long time ago, doing kind of dumb, punky versions of 50s and 60s rhythm and blues twist. That sort of brainless 50s and 60s pop. Twist core was a funny way of describing that. If you want to use more conventional music

taxonomy- garage rock, punk blues, these are all suitable things.

Rob: Look up how they described The Ramones in 1975, and that will all work. It’s pre- British Invasion rock and roll but louder, faster and played worse.

How do you guys feel about the shift in mainstream music from that nostalgic rock and roll sound to artists producing music from their laptops?

Jeff: The most commercial music has gotten very distant from the standard rock and roll band. However, if you look at the practical logistics of a lot of rock and roll band stuff, in the 21st century, it’s hard. They are very dependent on automobiles, because you need cars to move around heavy, large equipment. It’s also very dependent on being able to make money at each show, equipment being maintained, etc.

So you can do what we do where it’s a labour of love project that we care about independent from our own careers, but to actually want to be a career musician making money, it’s a hell of a lot more practical to be someone like Garbageface, who is totally self sufficient and can tour by bus if he wants to. We can’t tour by bus, we don’t have that kind of flexibility. Also, managing work, and touring as four people is so much more challenging that one. In the way that we’re making it, but I think that the age of it being a dominant commercial force might no longer be a thing, and that’s okay.

Rob: It is also kind of hard to access, if you step back and think about how much equipment we need. When we load up and go to a show, if you’re bringing everything, a drum kit, a bass set, and a guitar and a sax, even if that stuff is mid market it’s a lot of money. You’d be hard pressed to say, hey, I want to start a rock and roll band and I don’t have anything. If I was starting from zero and I wanted to make music with the resources that are available to me I’d want to go into electronic music because I could buy a laptop for 400 bucks and it would be good enough. It would be my studio rig and my stage rig, what do you get for 400 bucks as a guitarist?

It’s no wonder why this is so hard but it’s somewhat anachronistic for how much we love the 20th century.

What is the best and worst thing about being in the Peterborough music scene?

Jon: The talent here is so fantastic and the quality of the music for the size of the town is kind of mind boggling. The number of venues and the number of scenes is very unique. My very first time in Peterborough, I was looking at the Spill and I told my parents that’s where I’m going to play, that’s going to be my home and it turned into that. So that’s always been my favourite place to play. The worst thing about it for me? A reduced roster of horn players, or a minimal horn community.

Jeff: The same thing is both great and challenging of the Peterborough music scene, and that is how rich and fertile it is. Because there are so many bands and so many shows sometimes it is hard to a) know what show to go to and b) get people excited about your show. That’s an amazing thing, and I’m not complaining about that, it’s the epitome of first world problems; there are too many awesome bands in this town!

Rob: You can’t play a show and not be head to head with someone who is better right? It’s just not possible.

Jeff: We played a show in Bellville with tons of young people there, and it was such a diverse audience. This was the show, there were no other things going on, and people were hungry for music in a way that people in Peterborough aren’t because we have this grand buffet of excellent bands to gorge ourselves on. We’re all very fat with good tunes and I sometimes forget what it’s like to be in a town where people are hungry for new rock and roll. That to me, always feels like a blessing and a curse of the Peterborough music scene.

You can listen to No Pussyfooting’s rockin EPs on Spotify, and support these local

artists by increasing their their play count! You can also find them on YouTube and Bandcamp. 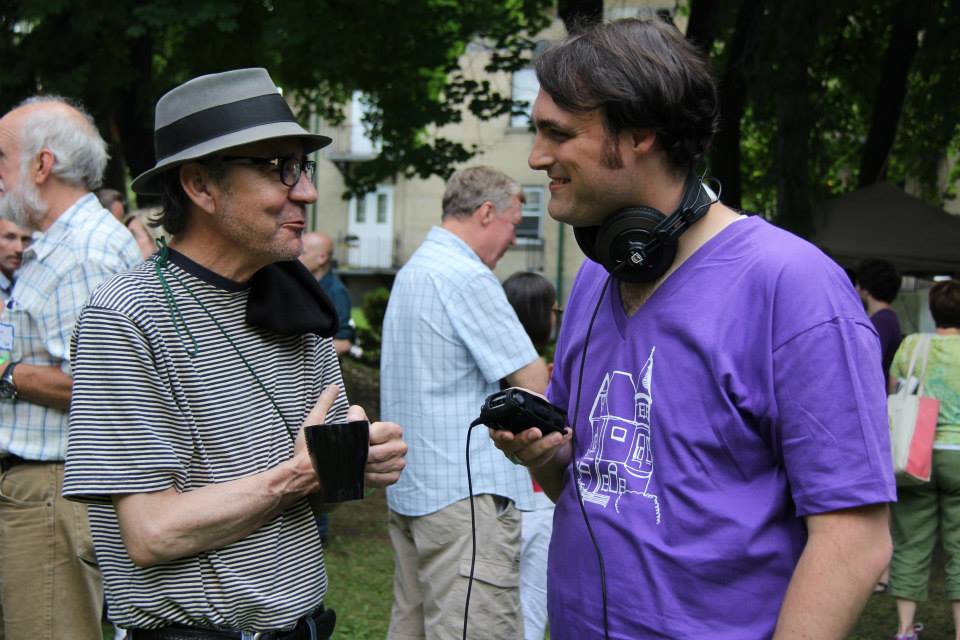