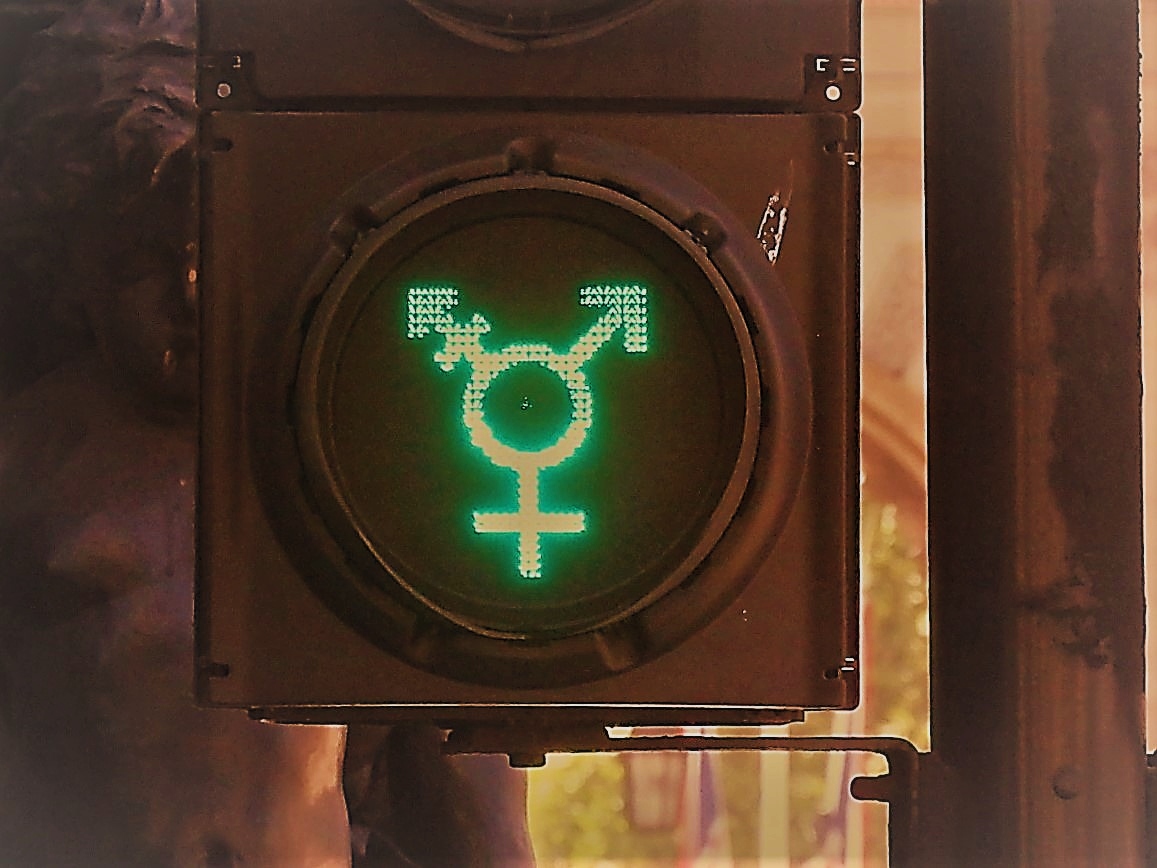 Written by
Vik Vimes
and
and

This means several things at once.

It means, in my case, that I am AFAB – that is, assigned female at birth. Birth sex assignment is a nigh universal experience; mine just happened to be the incorrect assignment.

It also means, in my case, that I am transitioning to male, but again, this is inadequate vocabulary. It implies, for instance, that there is an end state in which I will be wholly, entirely male and that maleness overwrites and subsumes my initial identification as female.

This is problematic for a number of reasons. It implies, for example, that throughout this process, I will become steadily more and more masculinized until I am indistinguishable from a cis man – that is, a man who was assigned male at birth and who identifies as male. However, there are several base assumptions being made here, none of which have anything to do with me, Vik Vimes, as a person.

To be trans is to be perpetually liminal, to be between spaces. We exist at the borders of social acceptability, both outside and inside the LGBTQIA2S+ community. Wherever we turn, there are barriers to our wellbeing, our self-identification, our bodies, and our lives. And there is another mountain to cross: where to have these confirmations, often taking the form of surgeries, performed.

This is obvious to anyone who chooses to pursue medical transition.

Not all trans folk seek the same goals. Some of us forego surgery and hormones and instead choose to live without altering our bodies; others opt for the more radical changes that take place under the careful monitoring of medical professionals. Both are perfectly valid and neither are easy.

This medical process is something I see as both uplifting and damaging. On one side, we see that medical intervention, when available, has a marked and incredibly positive effect on those who choose to access it – but therein lies the problem: we must have the choice.

Some trans folk do not see themselves as having ‘a condition’; I do not, for example. Condition implies cure and cure implies wrongness, but I see no inherent moral qualms in existing as I am, right now. There is no wrongness to my body; that would suggest that there is a right way and a wrong way to have a body.

In Ontario, OHIP provides some coverage of gender-related issues, but there are few gender therapists and even fewer clinics through which one can receive referrals and funding. Moreover, what is and is not covered by the province is, frankly, arbitrary and often cruel.

For example, I could receive a double mastectomy – removal of both breasts – for free, but any additional sculpting afterwards would have to be paid for out of pocket. Despite a female chest with no breasts being different from a male chest, chest masculinization surgery is considered cosmetic and is not covered. Nor are breast augmentations for trans women, nor is tracheal shaving, or facial feminization. These surgeries are arbitrarily categorized as cosmetic and, therefore, unnecessary to well-being. However, the amount of distress caused by these incongruent pieces – a trans woman with a jaw she hates, a trans man with a bustline he cannot hide – cannot be quantified. To suggest that these things are frivolous or unneeded is to imply the suffering that arises from them is ridiculous.

If, for example, I had been unlucky enough to live in PEI, I would have no option to pursue a hysterectomy (removal of the uterus) except to pay out of pocket and, most likely, have to go out of province to have it performed. This, on top of the already prohibitively expensive cost of so-called ‘cosmetic’ surgeries, makes everything ten times as difficult. In Ontario, in my hometown, it only just became a possibility that I could be able to receive a hysterectomy without having to go to Toronto and pay for the travel and accommodation fees myself.

It is swamped with referrals. The waiting list is years long. Nevertheless, the Centre Métropolitain de Chirurgie soldiers on, providing people with what they need to finally feel at home in their own bodies. In fact, the clinic does not charge patients for those supposedly cosmetic surgeries, either; their double mastectomy procedure is performed with chest sculpting at the same time. Moreover, they offer people a place to stay and recover until they’re able to make it home to their own practitioners.

Even with that small mercy, the fact that there is but one clinic to cover these surgeries in this day and age is preposterous. There are surgeons who are willing to be trained in these procedures; it is a matter of pure red tape that they are not given that training, nor are they provided with enough beds. A Huffington Post article from 2015, for example, states that in British Columbia, a program designed to streamline the process of transition was canned for no particular reason other than fabricated claims of lack of interest.

And now, with the possibility of the United States placing draconian gender laws in place that would eliminate the ability to ever have one’s gender marker changed, things become even more complex. I cannot say what, exactly, the consequence of such American legislature would be, but presumably, it would put up yet another barrier to Canadians seeking surgical intervention.

The legislation proposed by the United States is barbaric. It is completely immoral, it is unenforceable, and it is absolutely, patently ridiculous. Unless they are happy to pay billions of dollars to ensure that every citizen of America falls neatly into a set of arbitrary criteria, then this legislation is transparently transphobic, and targets trans people for no other reason than that we do not fit into the boxes created for us.

And, as any housecat can tell you, being put inside a box is entirely different from stepping into a box of your own volition.

Searching for Mental Health Resources as a Trent Student
By
Emi Habel
and
From Vik Vimes
Hmmmm...
It looks like there's nothing else from this author. Perhaps you, the reader, could
pick up the pen and begin where they left off.
Culture
|
Arts

Searching for Mental Health Resources as a Trent Student
By