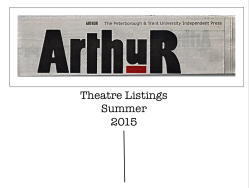 A beginner’s guide to the Peterborough theatre scene: summer edition

Written by
Dane Shumak
and

So! You’re new to Peterborough, or you’ve been here a while and never made it out to see what’s going on in the local arts scene. You want to try and fix this, or perhaps you don’t like art at all, and are only reading this article so you know where to aim your sharply barbed, cynical and socially conservative tweets next time. Regardless, here’s what’s coming up this summer!

If you’re a theatre lover, you’ve got a bevy to choose from. The Peterborough Theatre Guild is putting on two shows which will be running from July 17th to July 25th. Check out The Marvelous Wonderettes, by Robert Bean; directed by Margaret Pieper. A musical comedy, the show tells its story through song, paying homage to great female artists of the 50’s and 60’s.

As well, check out 4000 Miles, by Amy Herzog, directed by yours truly. The show is a dramatic comedy about a young man who loses his best friend, and the ornery, hilarious and no-holds-barred grandmother who helps him get his life back on track. The Guild is a great place to start for local arts, and their theatrical season goes all the way through the year. It runs from August 13th to the 24th.

The Theatre Train doesn’t stop there! In town, you also have the serialized theatrical adaptation of The X-Files, created by Chris Carter and directed by Kate Story. Adapted from the famous 90’s cult-classic supernatural crime drama, the show runs at The Theatre on King for only two more episodes, playing Tuesday June 30th and Tuesday July 7th at 8:00pm and 9:30pm.

The Theatre on King continuously brings cool, cutting-edge and unique theatre to the forefront of the Peterborough downtown arts scene, and The X-Files is all of this in droves. The venue is sponsored in part by Theatre Trent, so you’ll definitely want to see the incredible ways your levy money is being used if you’re a Trent student!

If you have a car, or a friend with a car, or you’re really, really, REALLY into biking, check out some stuff in the region! Homestead Theatre, in Ennismore, is putting on More than a Memory, written and directed by Paul Crough. You’ll have to do your best to get tickets, as they sell out virtually instantly!

4th Line Theatre does shows about local history, performed outdoors on the very same land the shows take place on. It’s a special experience, and not to be missed. The Bad Luck Bank Robbers runs from June 30th to August 1st, and Gimme That Prime Time Religion runs from August 10th-29th.

Finally, Cordwainer Productions is continuing its concert series, and throughout the summer, the Citiots Improv Group have monthly shows at The Gordon Best. CrackerJack Theatre, a new initiative, has its debut show on July 4th at the Theatre on King. Keep an eye out on the web, and on poster boards around town. There’s always music, theatre and art being performed around town and it’s absolutely all worth checking out.

Good luck, and welcome to the scene!

Subscribe to Arthur's Newsletter
Thank you! Your submission has been received!
Oops! Something went wrong while submitting the form.
No items found.
From Dane Shumak