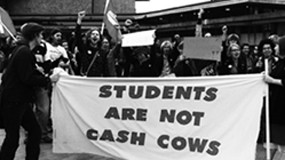 Written by
Dane Shumak
and

Ninety-four to 60 sounds like the score of a mediocre basketball game.

It most certainly does not sound like any kind of representative electoral result. But, indeed, this is the margin by which the Vice President of Campaigns and Equity election was decided by this fall.

Not that I begrudge the successful candidate this result, not at all. Instead, I begrudge the endemic problem that allows us to constitute 154 votes as something even within the realm of satisfactory. Allow me to break it down for you. Call me MC Politik.

First, let’s start with what the problem isn’t. The problem is not a politically disinterested or disengaged student body. Have you been to Trent? Polarizing political debate is what we do. The problem is not that the TCSA is an inherently dysfunctional body, because they are not. A new student centre and an ever-improving transit system (albeit, a still imperfect one) are testament to that. And, finally, the problem is not that the TCSA is purposely exclusive, because it is not. It tries to connect with students and it tries to do the best by them. And, by gosh, good for you, TCSA, because you’re paddling upriver with a spoon and you don’t even realize it.

The first part of the problem is that the TCSA fails to connect with and represent students because the system is broken. If you disagree, allow me to point to the fact that there are five vacant TCSA positions including both first year positions. Don’t blame the first years either because when I was in first year, I didn’t even know who the president of the TCSA was, let alone that I could be a part of it. How can the governing body of a university barely manage to complete itself? How can the student body field one, maybe two, candidates for president per year if we are lucky? How can three percent voter turnout be sufficient? Yes, a broken system indeed.

The second part of the problem is that all of us, the TCSA included, are content to bury our heads in the sand and ignore the fact that what is happening is actually happening. The same people, without fail, run and re-run for positions of increasing responsibility and consistently get elected.

Nobody within the system has ever challenged it because they are told “this is how it is,” and those who dare to dream “this-is-how-it-could-be” thoughts are shut down by the overblown bureaucracy of it all. New blood, of which there is usually very little, find the system quite cushy once they are inside of it. It affords them a nice blip on their resume and the power validation we all seek without really any effort, because effort is hard, change is scary, and the system forbids it.

The third problem is that we have become cynical. And by the time the first years grow to realize what is happening, they, too, are cynics. And by the time the fancy promises of new candidates get smashed on the metaphorical rocks of bureaucracy, they too find themselves to be cynics. It’s like a cynic party, and we’ve all just collectively shown up to bemoan a chronic problem none of us care enough to try and fix because you just end up laden down with bureaucracy. It’s like if Spiderman slung figurative red tape instead of webs, and capacitive change was Venom. Yeah, that bad.

I guess I am just one of the many voices lamenting the vacuum I’m throwing my money into. I am, quite frankly, tired of nobody being held accountable. When there is consistent empirical evidence of failure, is it not the job of the people in charge to collectively go “my bad”? Perhaps I come from a time where the student government I pay to represent my interests and engage my needs actually represents my interests and engages my needs. Surely, I must be a time traveller.

You know, what’s funny is that people will read this and go, “If you’re so mad, why don’t you do something about it?” Maybe we all should. Maybe that’s the problem, is that we all expect somebody else to break the mould for us. And maybe we all need to realize that to fight a tank, you need to be more creative than to shoot it with a gun.

At the very least, let’s all start giving a shit. That’s a good place to start.

The Big Switch: from TCSA to Trent Mobile
By
Spencer Wells
and
From Dane Shumak