Written by
Lauryn Sloos
and
and

As the Heritage Resources Coordinator for the City of Peterborough and head of the Heritage Preservation Office, Erik Hanson and his office play an integral role in the preservation of the community. Here, the office oversees all of the built heritage programming. Arthur had the opportunity to sit down with Erik to discuss the many facets of heritage in the City that he helps oversee. Erik describes some of the programs that his office is involved in;

[The Heritage Preservation Office manages] designation, listing on the heritage register and we administer all of the incentive programs. We've got a tax reduction program for designated property owners. We've got a grant program for owners in the heritage district. And we also oversee all the archaeological management for the City. So anytime a developer is looking at a new project in an area of high potential for archaeology, we oversee the requirements for the archaeology studies they have to do, and we do the same thing for the City. We hold ourselves to the same standard within the City, as we do, for private development when it comes to archaeology. So, there's a lot of making sure that the right digging is done before development happens.

Erik shared his extensive and immersive experience throughout his career but first became interested in heritage buildings while completing his undergraduate degree at Trent University.

During Erik’s undergraduate studies, history professor Chris Greene influenced Erik’s interest in the study of architectural history. While studying at Trent, he also had the opportunity to work with a heritage contractor on an old building located close to where he was staying for the summer. Erik recalls it was his education and real-world experience that had first informed his involvement with heritage preservation.

It was a serendipitous moment to meet Chris Greene and have him spark that interest academically. [My education] around heritage, led to the interest, but it was really the hands-on stuff that ignited the passion for heritage preservation.

The study of heritage preservation has also changed in definition over time. Erik has been pleased to witness the evolution of heritage from defending only the ‘blue bloods’ in their grand monuments from European history to now encompassing everyone's culture and history in a more fleshed-out manner.  The Preservation Office has been involved in a new wave of conversations pertaining to heritage. As settler mentalities that have dominated heritage start to deconstruct, understating what heritage looks like in Eurocentric communities like Peterborough are changing.

Indigenous heritage is another topic that has been rethought in heritage preservation. Erik explains that strides are being made to communicate with Indigenous groups in Peterborough-Nogojiwanong regarding development and heritage.

The richness of Indigenous history is found in oral traditions. So how do we use the systems of heritage preservation that were designed around European settlement preservation of buildings and styles? How do we use our tools to work for the protection of Indigenous lifeways? Are we even still using the right tools, or do we have to take apart heritage entirely and understand it from a different perspective?

Evidence of Indigenous communities may not be commonly found in built structures, but they are identified in the landscape. Archaeological sites are found periodically along Jackson Creek, Erik states because it was part of a major portage route in the area.

The main interface with Indigenous communities is through archaeology. A predictive model designed by Dr. James Conolly, a Trent professor of anthropology, takes all of the data sets and information that the City has, and aims to predict the likelihood that there is archaeological evidence on the grounds of Peterborough. This is supplementary to all of the information that the province uses in their guidelines and checklists to determine the potential for archaeology. And they put that all into a predictive model. This system is used on any parcel of land and can anticipate the likelihood of there being archaeological resources present, because of all of these predictive factors.

And one of the things we incorporated was, that we asked James to sit down with Curve Lake and Hiawatha [First Nations] and talk about the oral traditions that informed their understanding of how Indigenous peoples in the area have used the land over time. And the idea was to try and incorporate oral traditions as a rational, valid tool for understanding … Dr. Conolly conducted focus groups with Indigenous communities talking about what they needed to see - both in the model and in the corporate policy and procedures that we created.

Erik states that the City is committed to consultation with these communities, acknowledging the fact that people, in all communities, want to be kept in the loop. It is when community members feel like they've been left out that potential conflict begins.

And we actually do more consultation in some ways than the province would require through a lot of planning processes. Our engineering department speaks directly to Curve Lake as needed if we're doing an infrastructure project, for instance, and most of the time the Indigenous communities come back and say, “We're good with this,” with the understanding that if something happens, all bets are off and work stops. But like with most communities, communication is the key.

Through Erik’s experience with the City of Peterborough, he reflects on some of his favourite projects that he has been able to be a part of. He is drawn to modern architecture, so the old post office on Charlotte Street was an example of heritage restoration in this architectural style which he was excited to be involved with; “The post office was a really cool, adaptive reuse into residential accommodations from an old institutional building.”

Erik said the project, at the time, had issues with parking requirements that they couldn't meet to convert it to residential space. They identified a solution when they discovered that mail sorting equipment had been installed on the bottom floor, and it was so heavy that the ground floor had to be reinforced with thick concrete and massive support pillars in the basement. It also resulted in the creation of a perfect, ready-made underground parking garage. All they had to do was paint lines on the concrete floor and open up one basement wall to meet the parking requirements.

Erik also touched on myths surrounding heritage restoration. It is often assumed that restoring a historical building will be more taxing on the environment and more costly, but that is not always the case; “Heritage is first and foremost about the environment.”

A presentation he attended addressed the life cycle analysis for buildings. Studies show that new constructions, such as a new condo buildings, have a carbon debt of 70 to 100 years. That means it will take at least 70 years for all of the old carbon that was used to construct that building to be sequestered anew by the world's biomass, including all of the carbon from the oil used to power the machinery that constructs a condo and its components. Erik states that the vast majority of buildings constructed today with that level of carbon debt will be demolished before the carbon debt is paid.

So, there is newfound value in heritage buildings because of their carbon debt-free potential. Heritage preservation isn't only about preserving historic structures. It is crucial to understand that it is also about preserving the carbon that has become embedded in the landscape.

When you look at a historic building, that is a site for potential adaptive reuse to be converted from, say a factory, to a house. The typical environmental payback for adaptive use of a project like that is about 30 years. So, within a generation of occupancy…say over that 30 years of occupancy, they will actually have seen the environmental cost of creating that apartment paid. And that building now provides housing and is carbon debt-free.

And if someone is fortunate enough to have ownership of a historical building, they can receive a tax credit to maintain the integrity of their home or building. The Heritage Property Tax Rebate Program is designed to meet the increased costs that come with having to do the work on a heritage building that meets heritage standards. Erik explains, for example, if someone owned a historic brick structure that is part of the City's program and needs the mortar scraped out and replaced, you should hire a historical mason who is familiar with lime mortars and soft mortars, and also how to remove mortars without damaging the brick. The City expects the homeowner to meet heritage requirements since there is a premium to be paid for that kind of specialty work. In the end, the tax credit lowers the taxes of the homeowners on an annual basis.

Throughout his experience, Erik would characterize heritage conservation as each of our own sort of individual cultures that is reinforced by our experiences and the physical world around us.

You and I each have an individual background, which is uniquely ours. It's informed by our ancestors and that's our heritage. So, to me, heritage conservation is about making sure that those physical elements of the world around us that reflect the heritage of who we are as individuals and as communities are protected.

Many thanks to Erik Hanson for being so willing to speak to me and share his knowledge of heritage preservation.

Peterborough's Official Plan: Shaping Your Home for Decades to Come
By
Robert Gibson
and
From Lauryn Sloos 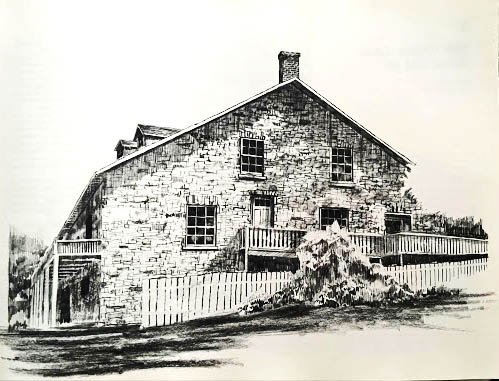 Has City Hall Failed the Transgender Community?
By
News
|
Campus