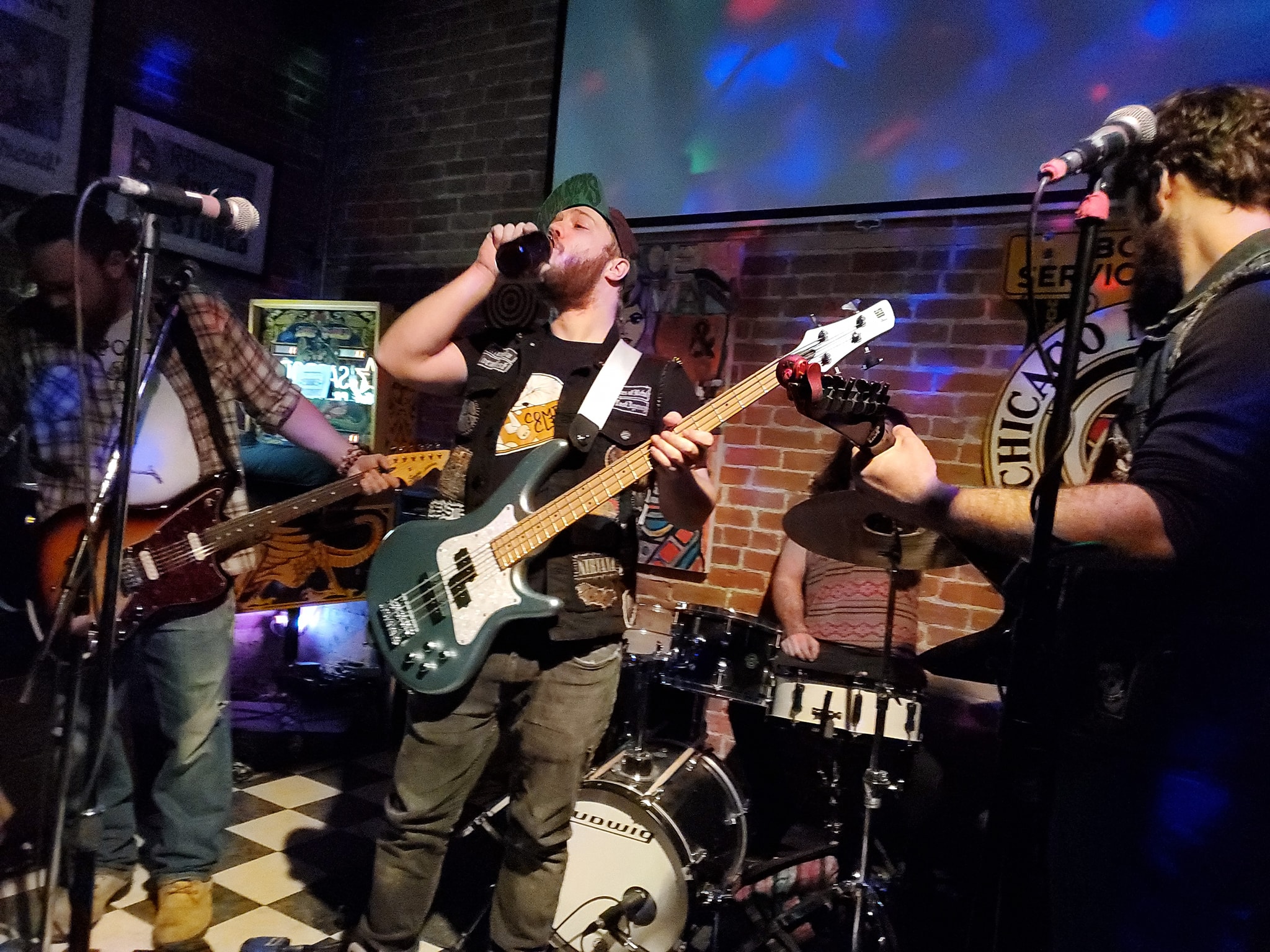 The Bayside Dropouts perform at the Twisted Wheel on January 17. Photo by Cameron Schettler.

Interview: Antixx, Among Legends, and The Bayside Dropouts at The Twisted Wheel

The Bayside Dropouts perform at the Twisted Wheel on January 17. Photo by Cameron Schettler.

It was a joyous scene to find many hardcore punk rockers back at the Twisted Wheel for what was anticipated to be an unforgettable show. As the room filled up with people, Cameron Schettler of Antixx opened up with a solo acoustic set, playing a variety of originals and covers. The audience cheered along to the background vocals of well-known anthems, such as “Little Talks” by Of Monsters and Men, and “Pullin’ Teeth” by The Cardboard Crowns. Combining the raw, folk-punk sounds from the classical guitar, with speed-metal inspired strumming and chord progressions, Schettler broke the boundaries of versatility in acoustic performance. He left the audience pumped up and excited for the upcoming acts.

The Bayside Dropouts from Kawartha Lakes graced the stage with their intense, in-your-face grunge and thrash punk numbers. With a brutal combination of bone-crunching deep bass riffs and hard rock guitar solos, the audience felt a wave of sonic energy that shakes one to the core. Not to mention the screaming vocals that challenge the technology of modern microphones to even register sounds of such high volume – The Dropouts gave us a kick-start that accelerated the room’s (and advertently, the whole block’s) energies to unprecedented proportions.

Next came the eccentric five-piece band Among Legends, from the Kitchener-Waterloo area. Their opening songs were theatrical, but unbelievably impressive. They immediately dominated the presence and attention to the stage, providing an iron-clad artistic cohesion, not once skipping a beat and playing in near-perfect unison. The band is comparable to the likeness of the original heads of pop-punk, such as Descendants and Blink-182. The room was filled to capacity; with people overflowing into the hallways to hear the bands, and if you were close enough to the slam-dancers on the floor, you would get sucked in like a typhoon. It's certainly a unique experience, especially seeing how everybody eventually gets involved on the floor and dances.

When I asked about people’s experiences with some of the bands, I was inundated with praises for these performances. I spoke to a fan who said, “In the pits, if you fall down, there’s always going to be someone there to pick you up. Even before you hit the ground, if you do, we’ll lend a hand and get you back on your feet. It's all about supporting people and having fun and trying not to get hurt too, ha!”

When Antixx (Peterborough locals) started to play, the room turned from a gathering of punk rock folks into a hurricane of slam dancers, once again opening up the pit that would last almost their entire hour (ish) long set. It was a scene of glorious mayhem, with people laughing and cheering, flying around the room in a punk-rock frenzy. At points, it was surreal seeing the lightning-fast progressions of every instrument shake the room, to the point I was convinced it was a dream. They played a variety of songs including their originals “Suffer in Silence,” “Living Hell,” and a rendition of “C.O.P.S (Corporate Oppressive Pieces of Shit)”.

I spoke to both the members of Among Legends and Antixx for an interview outside the venue. Here’s what they had to offer:

SW: What are your guys’ impressions on the show?

Mitchell [lead vocals]: There were approximately 1000 percent more people than we expected, because there were like 30 to 35 people and we expected like 0.

Tyler [guitar]: Yeah, we’ve never been here so we didn’t really know what to expect, [but] to see the turnout and energy in the crowd, it was amazing!

Mitchell: It was so much fun to see people dancing and moshing!

SW: I heard you guys got some songs out already.

Mitchell: Soon yeah, we got a few EPs right now, but we finished recording an album kind of at the end of last year, and I think it will probably be out by the summer.

SW: What would you guys say were some of the highlights of the show/performance?

Cameron [guitar]: Yeah, somebody got thrown on stage and knocked over my mic stand! It was pretty cool to see. They’re okay though, I talked to them after.

Mitchell: I think regardless of the number of people or the energy of the people that are attending the show, we always try to amp ourselves up and get all excited and energetic. I think what was pretty fun about tonight [was] that the people in the crowd fed off of that [energy], which is always a treat. We’re not the only ones jumping around. It's nice.

SW: Any last remarks to close it off? Future plans?

Group: We’re going to play all our shows in Peterborough, all of them forever! [laughs]

Mitchell: Yeah this is awesome, we’ve never been [here] before and I don’t think any of us can wait until we’re back again!

SW: We want to know how Antixx felt about the show.

Cameron: It was a pretty tight show.

Jesse: Yeah, it was high energy. We kind of approached it the way we usually do by vaguely/not at all preparing and just letting the energy dictate what’s going to happen.

Steve: Absolutely yeah, the first song really sets that into place… we had a friend of ours from a band – he’s a bass player and lead singer called ELE, and we established that together with these guys and he came up and played a song… We just try to play to the crowd, but yeah, that kind of just describes it. If we have another guy on stage and he wants to open a song with us, we’re not [at] a point where we have a set rigid dictation of shit that we have to do for the crowd.

SW: It’s very raw and unorthodox, would you say?

Cameron: Yeah for sure. Or [we lack] any sense of self-righteousness as well, which is really important, I think. We’re still just regular people who want to play good music.

Jesse: I feel like when you go into a set with an idea or expectation, and it doesn’t go the way you actually thought, that’ll make a lot of bands sit not necessarily uneasy. But we’re prepared for those hiccups in the set, and we’re not used to having a streamlined set. I don’t know [laughs], ‘cause a set going smoothly is sometimes rare for us.

Cameron: Our fans are crazy; it doesn’t matter if we’re fucking up. Half the time, people are tackled into the monitors and falling over the stage, knocking mic-stands over, and having such a good time.

Steve: The crowd energy for this one was a little more over the top than I expected.

Cameron: There’s nowhere to move, [the floor and stage] is small when you’re playing, and you see the main speaker monitor falling over when you’re on stage you’re like, “What can I do about this?”

Steve: Quite literally nothing, so... [laughs]

Jesse: So yeah, we were kind of watching the chaos unfold from the stage…

Steve: …and you know, always play to the crowd – though we’ve always done that, we’ve always tried to make it an enjoyable show for other people to listen to, and also have fun on stage. Other people pick up on that, and it doesn’t matter sometimes how perfect you play, the fuck-ups you have – it’s more so about the energy you have and what you can provide for people in making the show happen.

Jesse: We take our music really seriously, but ourselves… not so much [laughs].

SW: Anything you guys want to leave us off with?

Cameron: Yeah, go see Among Legends tomorrow [Kingston January 18, Toronto January 19). They set the whole thing up and invited us. It was sweet to have them up.

Steve: Cancer Bats are playing in February too.

Jesse: I would like to say it's an honour being a local band to play last and close, this show is set up for another headliner. It’s nice to know that people trust us to close a really heavy show and not disappoint, which I don’t think we did tonight.

As always, Peterborough serves to be a hub for great music, both local and for bands that have travelled far and wide. Be sure to mark your calendars to see them live (and don’t forget the earbuds)! 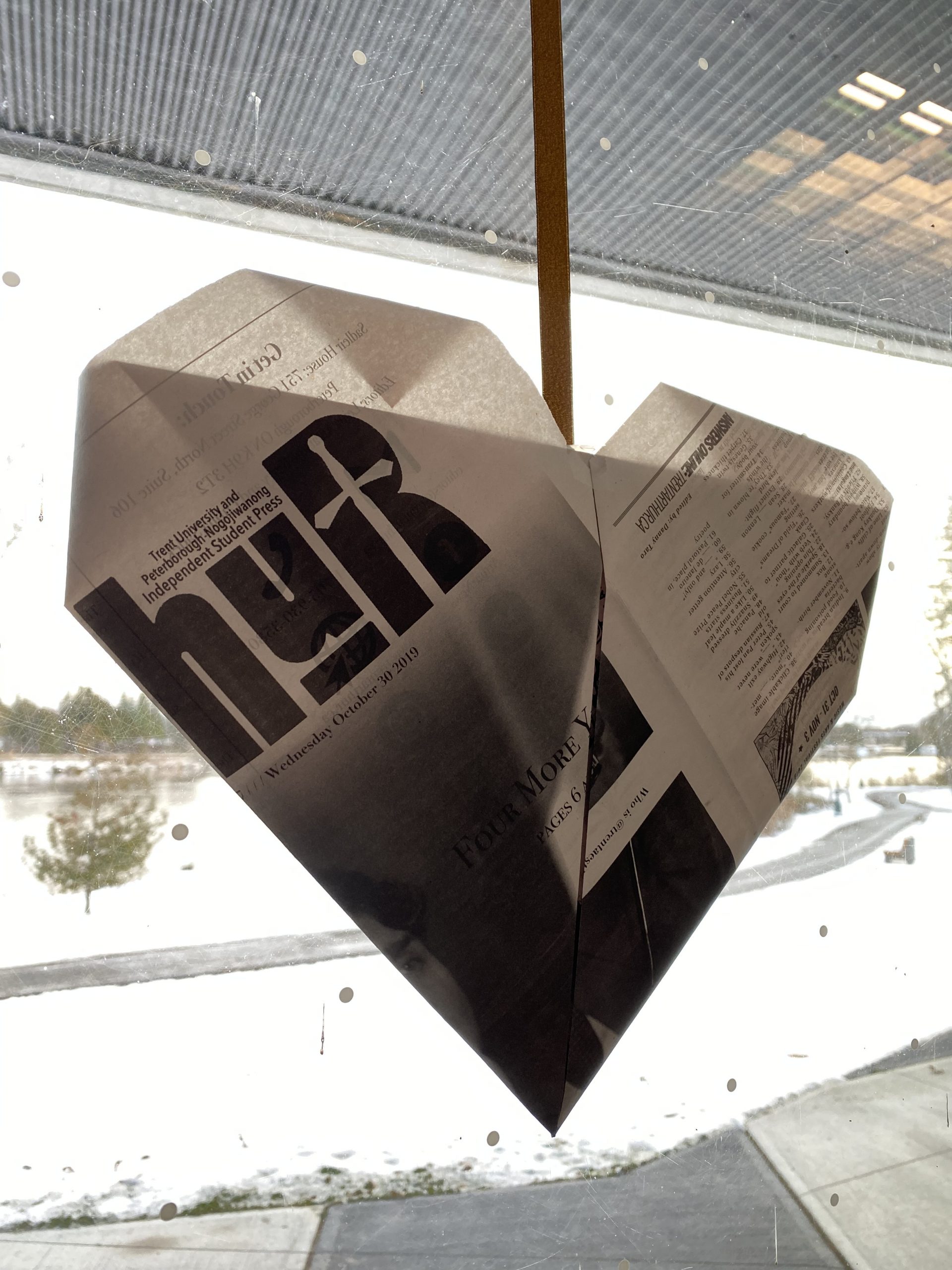