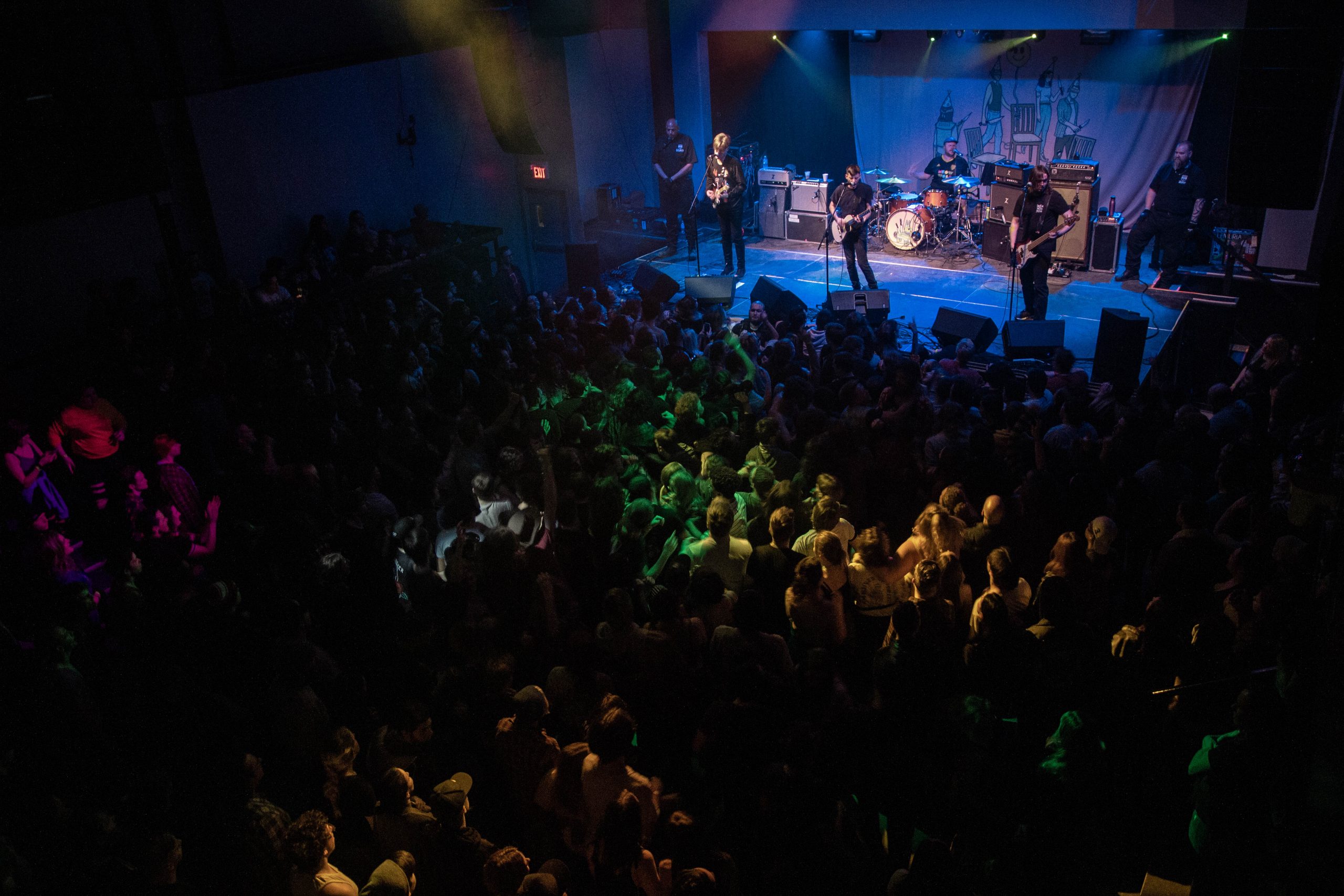 PUP performing at The Venue in Peterborough on February 20, 2020. Photo by MG Ommert.

PUP performing at The Venue in Peterborough on February 20, 2020. Photo by MG Ommert.

The lineup outside The Venue in Peterborough was flowing down George St. with many eager to get inside in what was praised to be one of the most anticipated shows of the year. PUP kicked off their first show of the Full-Blown Meltdown tour here, and the tension in the crowd was enough to raise the hairs on peoples arms. We were in for something great. Even more so, two great openers joined us before the big arrival of PUP on the stage.

Casper Skulls, the Toronto-based Indie Rock group, would best be described as the perfect illustration of what a concert in the clouds would be like. Their synthy, airy instrumentals and vocals in their opening songs combined with a heavy volume of fog from the machine created an experience that truly transcended the boundaries of the senses. The crowd was mesmerized by their tranquil ballads, which imposed a well-composed fusion of nostalgic dreampop with the modern developments of indie music. Songs like “Lingua Franca” are strong examples of that unique convergence. It was a welcoming start, especially in seeing how these shows invite acts of various styles/genres to diversify the overall show experience.

Drew Thomson Foundation kicked off closer to the tune of alternative rock, but still carried the fundamentalist pop vibe. The floor was nearly filled to capacity, with many trying to sneak onto the dance floor to get a better view of the band. D.T.F. finds the fine line between chill rock and crazy rock, all the while keeping up smooth guitar progressions and jam-along vocals that can really get the crowd off their feet. The first of the many moshpits that evening would see emerged in the middle of their set as well, which would only serve as an invitation to go even crazier as the night went on. Songs off their self-titled album release, including “A Little More Time” and “Pace Yourself”, embodied a resonance quite unique to itself, and definitely worked its way into our heads and ears for the rest of the evening.

We contacted D.T.F. prior to the show for an interview, on their ambitions for the tour and their own progress as a band. MG Ommert sat down with the band to get the scoop:

MG: What tour stop are you most excited for?

DREW: I’m excited to get to Albuquerque and Phoenix for some warm weather – that would be nice.

MG: How many shows do you have coming up?

DREW: We have 61 shows, between both bands.

MG: Are you excited?

DREW: There’s two weeks in between some of those shows, but yeah, it’ll be good.

DREW: Oh there’s one. Okay, so we stayed at this one hotel in Rochester, New York. It was terrible, like it was so bad, I was looking through the bedsheets and stuff, to make sure there was nothing there, lifted up the mattress, and there was a little crack pipe.

PETER: I slept in the van that night in all my clothes, jean jacket, everything.

MG: How long ago was that?

DREW: It was in August, on the Off the Meds tour.

DREW: No, I can barely play guitar!

MG: Okay, so when I saw Single Mothers, you were waving your arms everywhere and someone next to me said “oh I bet he’s classically trained!”

MG: What do you prefer about Drew Thomson Foundation over Single Mothers?

DREW: I don’t feel sore after every set. I’m usually sore after every Single Moms set. Yeah, I don’t like exercise. It’s nice having a guitar because it’s a reason to get to stand in one spot. That’s my number one, plus its nice to sing and not scream all the time. Sometimes I feel very depleted after Single Moms, which was fine when I was a young man, but as I grow older and older, it’s nice to just chill.

MG: I see, like the stage persona comes on and you start going crazy.

DREW: It’s the main thing, and they’re both super fun. We started two bands so we could stay on the road more, and it’s working out so far, so it’s a nice juxtaposition between the two bands.

DREW: Well, we have a new record we just recorded for Single Mothers. I’m really excited to start playing those songs live, because they’re a lot of fun. They’re really fun. Plus everyone is in both bands.

MG: So are these tours like, a D.T.F. run, and then Single Mothers, or like switching between the two?

DAN: It’s going to be fantastic.

Almost immediately into the first song that PUP played onstage, someone lost their shoe. Actually, there would be several shoes, phones, and people thrown around the floor and stage in the duration of the set. The album opener “Morbid Stuff” emerged as a volcanic fanfare, with the crowd screaming as loud as their throats could allow. The adrenaline and enthusiasm did not let up for so much as a second, but the band still made sure that people were okay. The most common example of that was making sure the stage divers landed “safely” on the crowd and not on the floor. The entirety of the crowd sung word-for-word the lyrics to “Scorpion Hill” – with the traditional raising of the lighter or cell phone torch. Its songs like those where you truly feel like you’re within a holy space, where everyone in the room is experiencing the same blissfulness, even when they’re dancing with their shirts off and jumping around ecstatically (shoutout to that one guy in the crowd, he was awesome). The mosh pit during “Full Blown Meltdown” was unlike anything I’ve ever seen, with dozens of people projecting themselves from the stage, opening a wall of death, and Stefan Babcock gracefully diving headfirst into the audience, only to be carried back to the stage to continue the chaos. It’s a great bonding experience. Steve Sladowski took the time to remind the crowd that the proceeds from the merchandise are going to the RAVEN’s Trust legal fund, to support the legal challenges of the Wet’suwet’en people. The set ended off on a bang just as resilient as the one it started off with, arms raised as the band played “DVP” off their sophomore album. Needless to say, PUP is a force to be reckoned with on stage.

MG caught up with Steve Sladowski after the show, just as the band was packing up for the next date:

MG: First show of the tour! You excited?

STEVE: Yeah! We haven’t been back to Peterborough in a long time.

MG: Do you expect anything out of this tour?

SS: Yeah, it’ll just be nice to be on the road again. We’re playing a few places we’ve never played before, so that’ll be cool.

SS: Oklahoma City, and Omaha, Nebraska and a few other places in the States.

MG: It must be a good feeling seeing your shows getting sold out.

SS: Yeah! Tomorrow in Buffalo is sold out; Oshawa’s sold out; it’s cool.

MG: Where would you say you’re most excited to go?

SS: Where the weather’s warm right now, that’ll be nice, just to get out of the cold for a couple days

MG: Okay, so we’ve got Peterborough, Buffalo, Oshawa – what are the other dates?

SS: So then we’re going to fly to Phoenix, so we do like the desert; then Texas; the mountains, like Denver, Salt Lake, and all that stuff; and then up the West Coast; and then home from San Francisco.

MG: So are these the only two Canadian stops?

MG: You guys didn’t play Toronto shows for a while before the summer. Why is that?

SS: Yeah, you know we wanted to do it when we had the new record, and just kind of make it special. It’s sort of a thing for us now when we play in Toronto – we want to make sure it’s a special sort of thing.

MG: Tell me about Echo Beach.

SS: Yeah, it was really cool! I kinda blacked out I mean not because I was drinking or anything, because it was kind of overwhelming and crazy. It was really cool having that many people there singing along!

As more and more talented artists/bands come to Peterborough, keep an eye on these bands on when they’ll return as well. You do not want to miss these shows!

The Next Best Option; the Musicfest Livestream
By
Elizabeth Mitton
and
From Mg Ommert
Hmmmm...
It looks like there's nothing else from this author. Perhaps you, the reader, could
pick up the pen and begin where they left off.
Culture
|
Arts