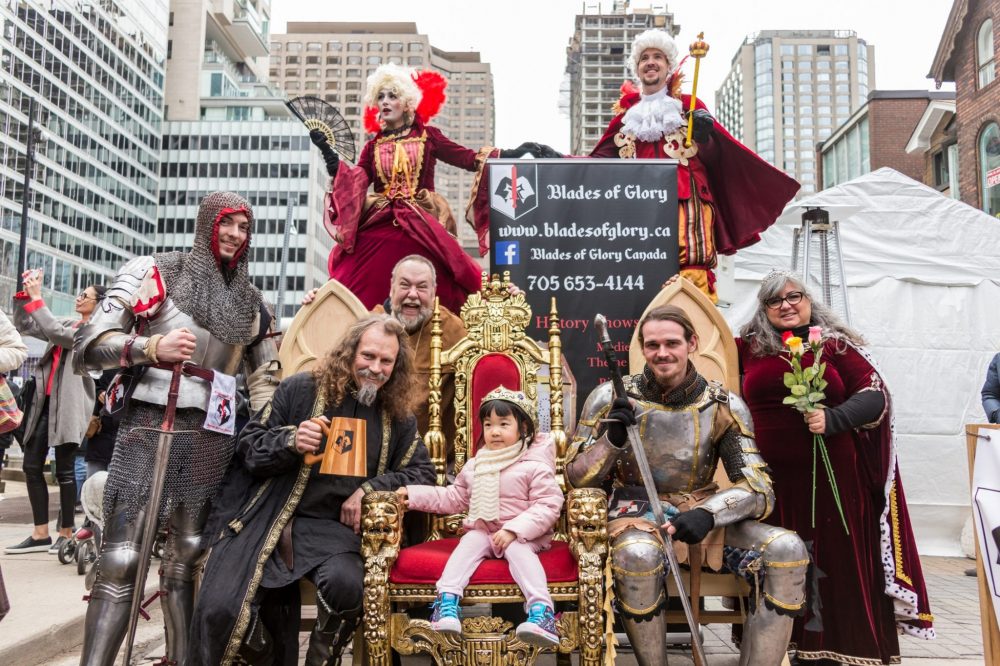 Blades of Glory Wants to Edu-tain You

“Bow to your opponent.”

“Bow to the audience.” Cheers erupt.

Swords clash against metal armour, as the sparks fly.

Blades of Glory is an Ancient History edutainment company. We bring ancient history to life at schools, festivals, and events. There are many aspects to Blades of Glory that are seasonal, such as our shows that we put on at festivals, fairs, and events. There is also our educational theme park with organized sword fighting competitions, and the annual Hastings Medieval Festival that highlights different styles of sword fighting. Blades of Glory also teaches history lessons in schools (we have ancient artifacts dating back 4500 years). There is also our new venture, which combines many interactive activities such as axe throwing, loosing a 20-foot trebuchet, archery, and learning different sword fighting techniques. Our Dungeons and Dragons experience is an immersive role-playing game that takes place in our Medieval park. The one constant throughout the entire year is our Sword Fighting School.

Blades of Glory brings a unique, educational, ancient-civilization experience to the Peterborough/Northumberland area. Schools would usually have to drive to Toronto to watch a Medieval Times show, but Blades of Glory brings a much more informal and interactive educational experience for students in a picturesque country setting – with much less stress. Our sword fighters and presenters are also educators. The passion our educators exhibit are constantly commented on positively by our guests to the park.

Blades of Glory was created in 1994 as an annual Scottish/Medieval festival in Campbellford. I first became interested in Blades of Glory when I was three years old when my parents took me to the Royal Ontario Museum. I was in awe of the suits of armour on display, calling them “spacemen.” When I look back now, that comment was quite insightful, as I learned years later that Henry VIII foot combat armour was the basis for NASA’s astronaut’s spacesuit. I also found out that some of my ancestors were knights and they even had a castle in England.

We have various suits of armour that we use in training and in Blades of Glory shows. Some were purchased but many were made by our own employees. One very cool thing about joining Blades of Glory is that we support our people and new skill development. Many people that join discover a skill that they never knew they had, including blacksmithing, leather work, armour-making, sword-making, wood-working, etc.

Our medieval sword fighting shows span a time period from the 900’s to the 1500’s. Our sword fighters get to personalize their armour and fighting style based on their individual passion or ancestry – whether it is Norse/Vikings, Crusaders, or from later periods, such as the Renaissance. If you watch our shows, you will see different time periods of fighters in duels against other. This makes for an awesome experience as the audience gets to cheer their favourite warrior onto victory.

Every sword fighter creates their own unique sword fighting style. The fighting itself is full contact, but we do not allow thrusting or grappling, which is the cause for many injuries in this sport. The duels are judged competitively, but at the same time the sword fighters also try to show off their skill with their weapon, and try out some very skillful moves including spin attacks, or ducking under attacks from their opponent. This just adds to the enjoyment for the audience.

In all of Blades of Glory shows, we aim to educate our audience. We try to make the learning process fun by using costumes, lighting, music, humour, skits, and of course, warriors in full armour hitting each other with metal swords.

Subscribe to Arthur's Newsletter
Thank you! Your submission has been received!
Oops! Something went wrong while submitting the form.
No items found.
From Harry Heydon Montse Alvarado
Hmmmm...
It looks like there's nothing else from this author. Perhaps you, the reader, could
pick up the pen and begin where they left off.
Culture
|
Arts