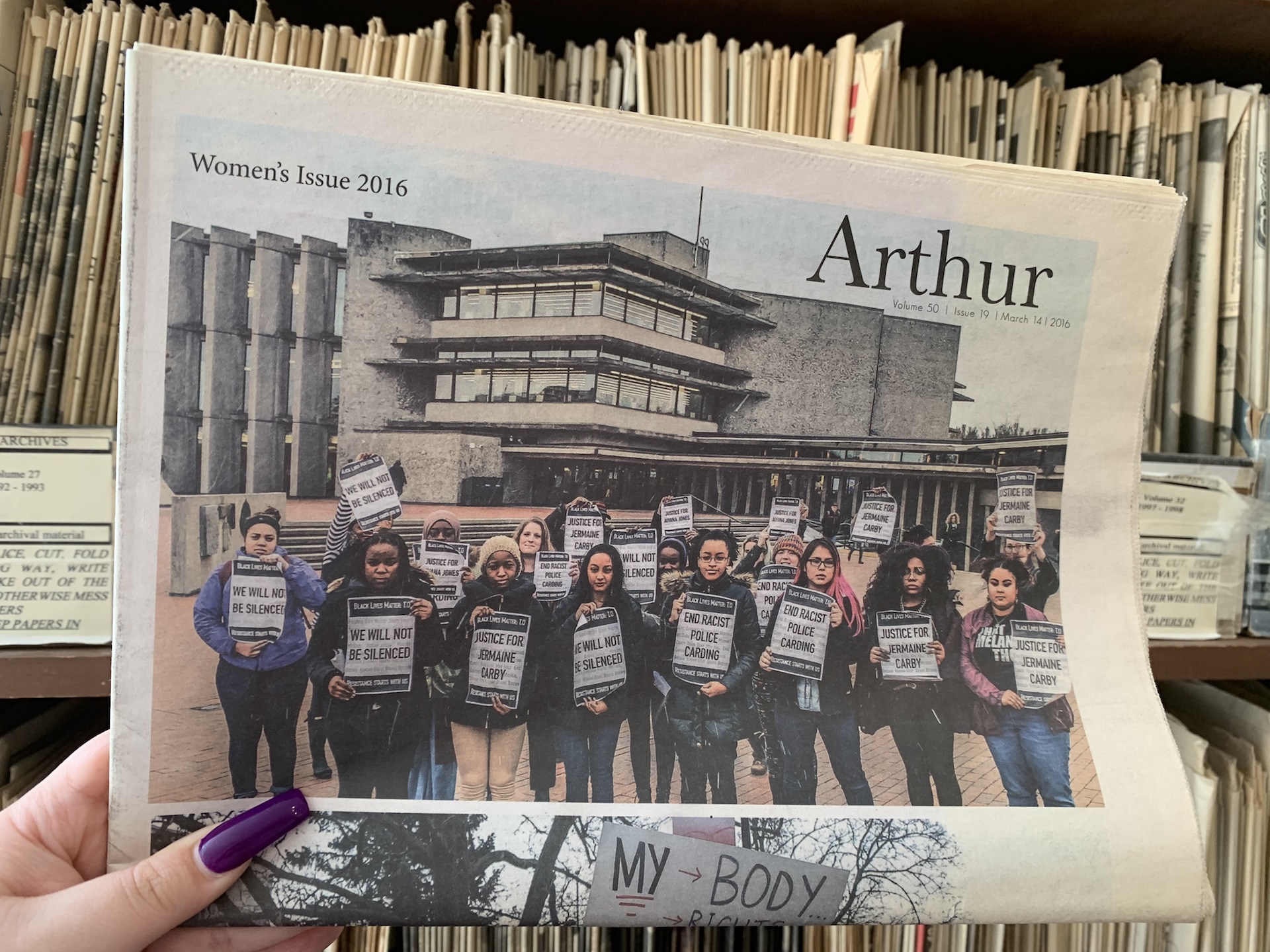 Editorial: Can Trent Ever Be Great Again?

Written by
Zara Syed
and
Yumna Leghari
and

We know what you’re thinking. How will Arthur Newspaper, the “leftist student rag,” take a stance on what is happening right now? We have been faced with many challenges this year, and many controversial stories have been brought to our attention that would cause the Trent community a great deal of concern.

Our stance, which may seem obvious given our backgrounds and social position, has been to approach matters within an activist framework. This year we aimed to bring to light issues of racism, sexism, homophobia, transphobia and used Arthur covers to speak to diversity.

We have received plenty of feedback regarding the direction in which we have taken the paper, and how different it is from last year’s. This year, Volume 50, Arthur Newspaper is a feminist newspaper.

If we’re going to call it what it is, Arthur has always been a feminist; a sexy, scandalous shit disturber.

Recently, when American politicians announced their candidacy for the presidential elections, the United States became a circus. Neighbouring nations are fearing the future if Donald Trump becomes president.

The mockery of Trump that has ensued  gathered this buffoon more celebrity than he is worth. He will never actually become president, because the “silent majority” he speaks of are the minorities whose past narratives are defined by slavery, immigration and genocide.

The more it becomes apparent that the majority is no longer representative of the privileged, the louder and more obscene the grab for power becomes. We can see it in Trump’s actions when he yells at the opposition, calls people imbeciles and threatens to sue anyone he feels threatened by.

That’s just what happens when one gets into politics. Even our prime minister, when he was a young pole dancing lad, was ridiculed to no end by a smear campaign run by the Conservative Party. Trump, on the other hand, who has no political experience, has just as much right as anyone else to run. He can say whatever he wants because, you know, free speech and all.

It brings out the worst people on our Facebook feeds, some that contest whether or not Trump is even a racist.

What is most interesting about our Women’s Issue is that topics of free speech and oppression are very much central to the insistence of the dying conservative stance on pro-life groups on campus and on city buses. It is so key to note that in 2016, women are still fighting for safe spaces. The idea of a world in which women don’t have that triggering, anti-choice propaganda forced on them is such a threatening concept for those that claim this is “free speech,” when in reality there is no room for these anti- woman movements to prosper. This irrational conflict is the reason we need feminism in 2016.

A couple of years ago, a pro-life group was touring Canada and made its way to Peterborough. They occupied the entrance of Lansdowne Mall and the Cineplex. They carried huge signs, some as large as the sides of transport trucks with images of miscarriages masquerading as fetuses.

The Peterborough Examiner covered the story saying this group had “a message for back-to-school shoppers,” which was pretty interesting considering the propaganda the group was using was too gory to print for the article. They are plenty in numbers, they are organized and they have money.

We received several letters of support for one of the two presidential candidates running, and they were strongly reminiscent of that organization because they flooded Arthur’s inbox around the same time. Each of the letters regurgitates the same rhetoric and indicates the indignity of this campaign. Even Edge’s piece echoes the echo chamber, as someone who ran and lost to Spiwak last year.

Certain candidates reveal their privilege and conflict of interests when one analyzes where they receive their campaign funds. Let’s not forget that paired with questionable funding to right-wing student groups was a document leaked by Wikileaks in 2008 exposing workshops held by the Ontario Progressive Campus Conservative Association (OPCCA) on how to take over student unions and undermine Ontario Public Interest Research Groups (OPIRGs) on campuses across Ontario.

Last year, during the elections, Arthur put Spiwak on the cover. Perhaps that was the past editors’ endorsement, and until we received those letters we had no plans of endorsing any particular candidate. However, in light of the fact that Spiwak has conducted herself with the most dignity throughout this bedlam of an election, the fact that her friends and supporters did not rally to write to us championing her greatness, as well as the fact that she never once raised her voice or threatened to sue anyone, is indicative of her patience and poise as a leader.

When Arthur receives wind of issues that could potentially harm Trent’s reputation, we have had to carefully consider exposing those truths for the sake of the university’s reputation. Little did we know, we never had to worry about us being the ones bringing to light how controversial things really are. Trent as a whole would do this to themselves by letting someone who harassed, bullied and attacked students on public forums run for president of the TCSA.

We have reprinted a cover from last year on page 6, to remind students that the TCSA has always been a subject of controversy. Braden Freer was exposed for assisting certain Conservatives on campus in an internal takeover, and resyndicating the Boycott Divestment and Sanctions movement that Trent was formally known to inspire other campuses across Ontario to adopt. Freer is still currently employed by Trent University, working in Recruitment.

With questionable individuals like this still active in the system, it is no wonder there is a rise of ‘mens rights groups’ mentalities that LeBlanc’s supporters embody at Trent University. Trent can no longer be great the way it was, because it is destroying itself from within.

Alaine Spiwak will tirelessly continue to fight for the rights of international students, even though she isn’t one.

She won’t threaten to sue people who use their own right to free speech. Issues of racism, sexual harassment and hate crimes occur across campuses in Canada, and they happen because universities turn the other way when rich, white (men) commit those crimes.

The bad press we were worried Trent would receive is brought about by the inaction towards those that will stoop to using gimmicky tactics to win, and the onslaught of consequences to come will be because of that very inaction of this institution to make students feel safe.

The person who has committed the acts that these extremists  who have bullied people on Trent’s Facebook group is given the podium to perpetuate their hate.

The fact that they have the same right as anyone to control the student union is Trent endorsing this behaviour, and it will take every student vote on campus to ensure that doesn’t happen.

Ice Cream, You Scream, We All Scream for a Better Student Union
By
Nick Taylor
and
From Zara Syed 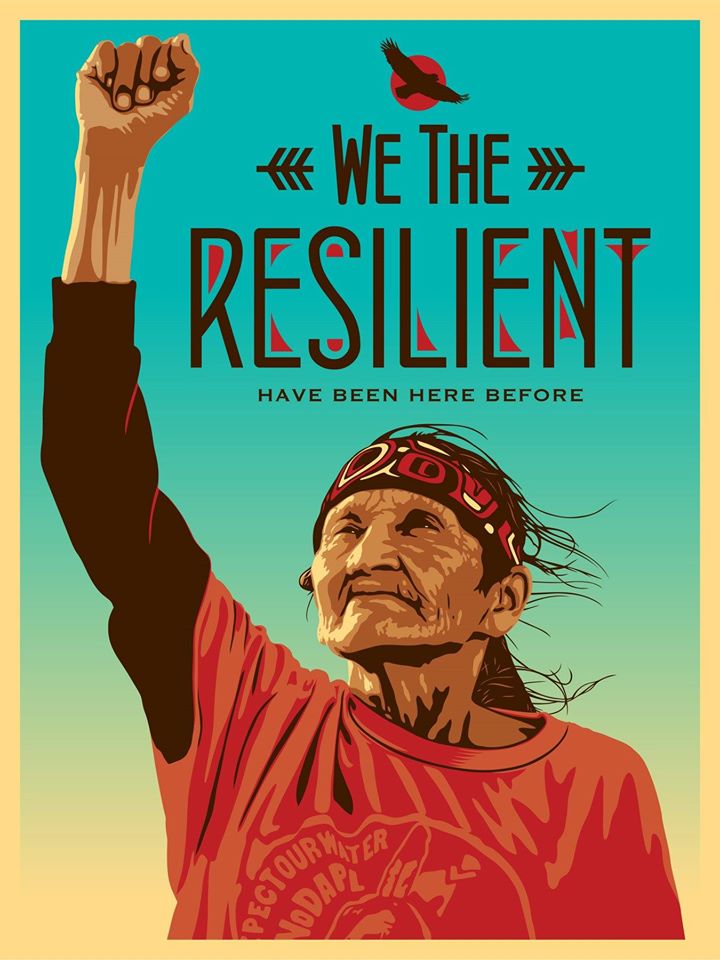 Editorial: art as an act of defiance
By
Zara Syed
and
Culture
|
Arts

On the Life and Death of @trentu.confessions
By
Nick Taylor
Related