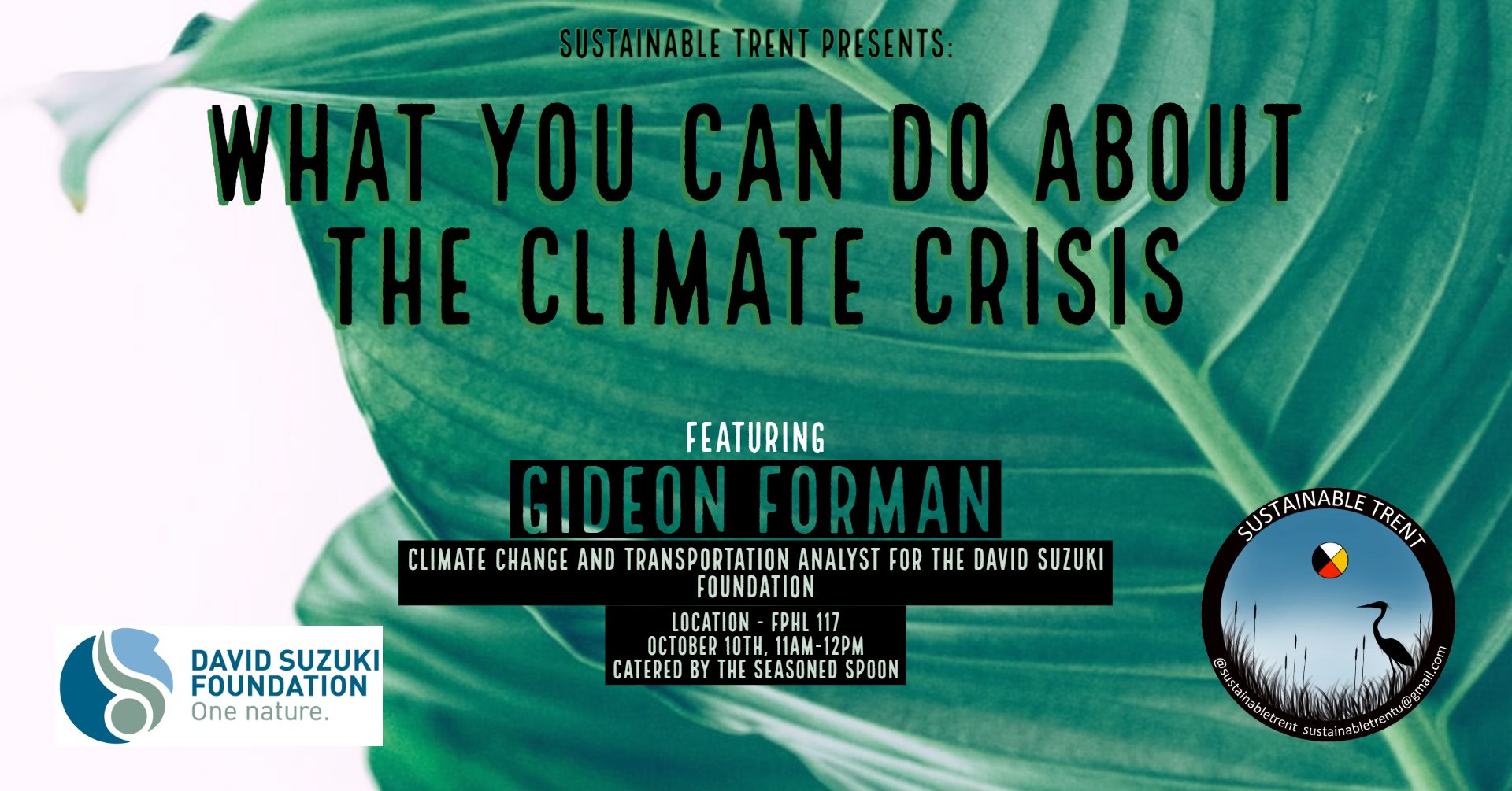 You Have the Power to Contribute to Climate Action

On October 10, almost fifty people attended What You Can Do About the Climate Crisis, an event organized by Sustainable Trent. Sustainable Trent is a levy group funded by students and focuses on environmental sustainability. The event, which took place in FPHL 117 from 11 a.m. to 12 p.m., was catered by the Seasoned Spoon and facilitated by Gideon Forman of the David Suzuki Foundation. This event closely followed the heels of Peterborough declaring a Climate Emergency on September 24, 2019, with Global Climate Strikes occurring in Peterborough throughout the month, which Sustainable Trent also helped organize.

Forman is a Climate Change and Transportation Policy Analyst who travelled sustainably using GO Transit. Forman brought up some interesting points during his presentation about the effects of climate change. He stated that in 2017, $150 billion was lost in productivity in the global South. There have also been sewer overflows, increased harmful bacteria due to warmer weather, and Lyme disease. He argued that climate change is an issue of justice because it impacts the poorest countries the most.

Forman’s main point in his presentation was that “the Climate Crisis is serious, but not hopeless." He brought up that some action has taken place, such as the closing of coal power plants, as well as the lifestyle changes people are making as they become more aware of climate issues. Forman encouraged people to look at their own lifestyle choices, such as their modes of transportation and diet. It is important to speak out in opinion sections of newspapers, as they are the most well-read section.  He also advocated for the spread of information, by writing to and reading the opinion sections in newspapers, as well as attending rallies like Fridays for Futures. These forms of activism encourage people to learn more about these issues, as well as influence policies by writing letters to newspapers, politicians, and business owners. Jobs - Justice - Clean Energy is a campaign that advocates for political parties in the federal election to take action on climate issues, which can be found here. Voting is an important aspect of change, so be sure to encourage voting and activism among your peers. Texting “vote 19” to 39-39-39 will allow you to learn more about the election and climate issues.

The discussion following Forman’s presentation was constructive. Someone suggested that there should be a more detailed discussion around meat consumption, bringing up the fact that some alternatives might be worse for the environment, such as almonds. However, it was agreed that local food was preferable and can be supported at farmer’s markets. One commenter made a point about China meeting its Paris Accord targets nine years earlier than anticipated, and Canada being 200 years away. Another individual commented that most of the world’s greenhouse gas emissions come from countries that generate a small amount globally. Significant reductions in global emissions could come from countries that contribute a small percent globally to climate change such as Canada. This supports the need for Canada to reduce greenhouse gases. If every country did their part, the number of global emissions could be reduced. This comment summarized the theme of the presentation: that small actions by many people have a big impact. Forman stayed behind and interacted with audience members after the event concluded, one of whom won a gift basket worth approximately $100. 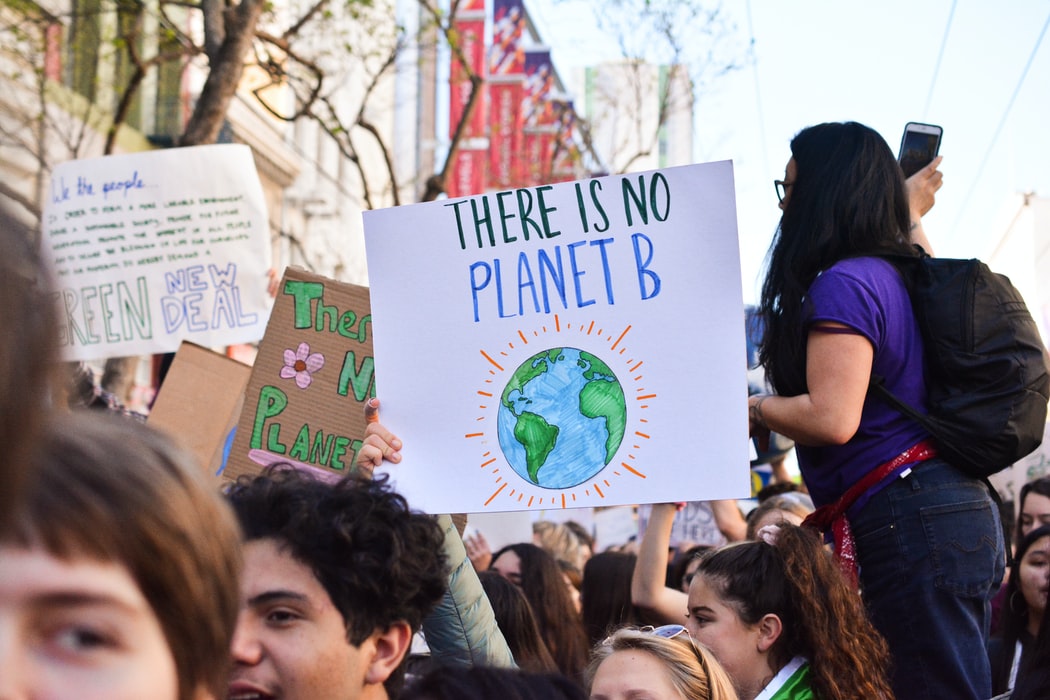 Climate Crisis and Alarmism
By
Anonymous
and
From Robert Gibson

Peterborough's Official Plan: Shaping Your Home for Decades to Come
By
Robert Gibson
and
Culture
|
Arts 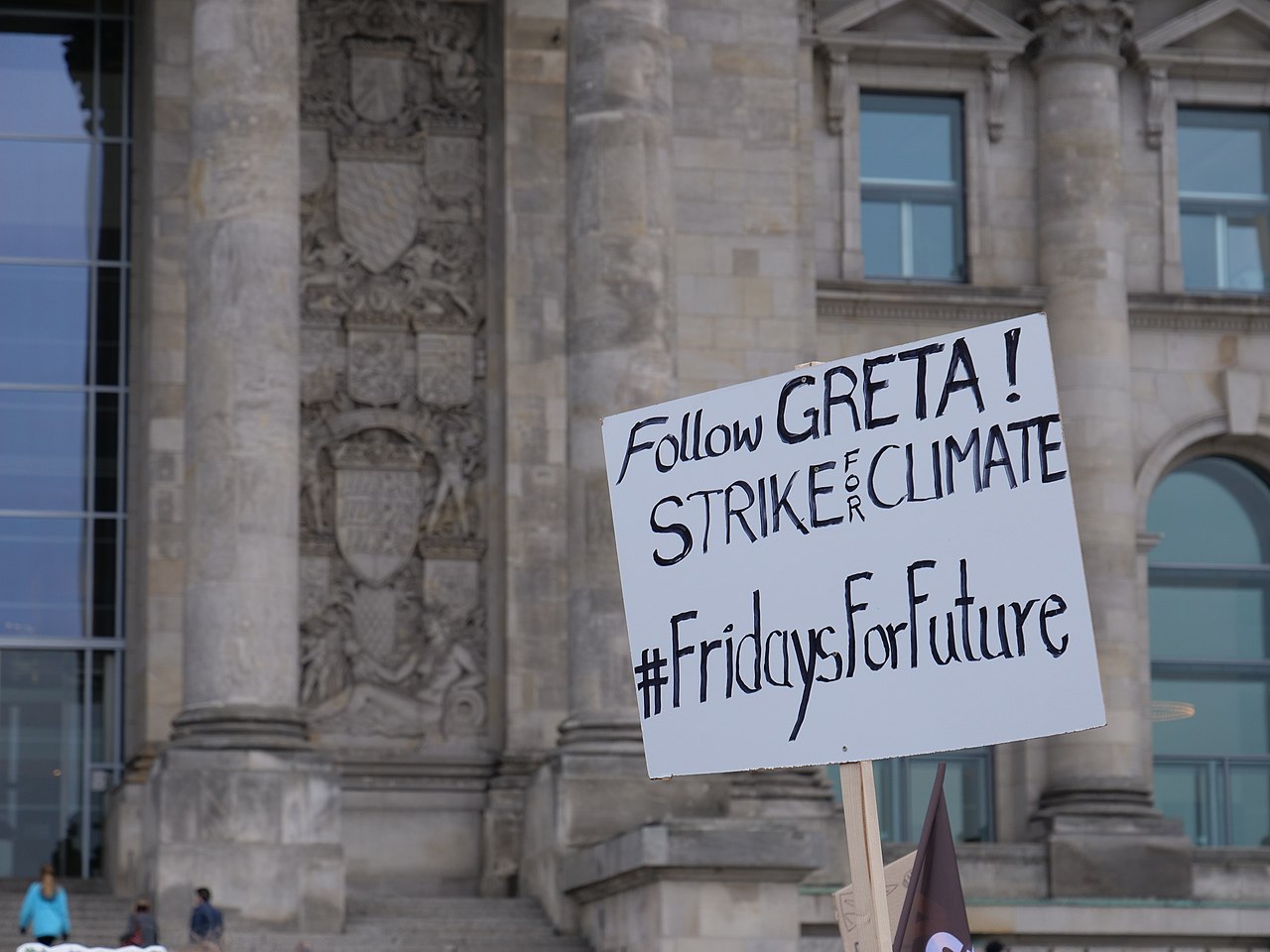