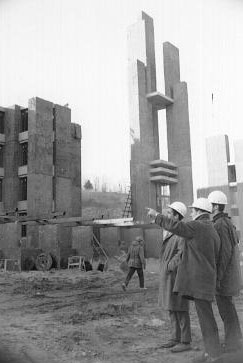 The construction of the new Student Centre has meant the end of Trent’s chronically packed Bata Library parking lot. However, administration is confident that Trent’s remaining parking spaces will be able absorb the increased demand.

Louise Fish, Director of Risk Management and partially responsible for overseeing Trent’s parking service and budget, says, “If you look at the re-surfaced green lot (parking rates are categorized by color codes, red being the most expensive, green being the least and blue being between), and all the other parking lots on the West Bank, there is more than enough space for all increased demand from H (Bata) lot.”

One concern will be the increased traffic on the road behind Champlain; both cars and pedestrians walking to and from their vehicle. TCSA President Alaine Spiwak believes that there should be sidewalks. “Lighting is a bare necessity there, but I’m also concerned there is no walking path there. People say the bike lane is for walkers, but it isn’t really – its part of the road. I wish there was a side walk, something putting people above the road.”

The green lot which is expected to see an increase in traffic has been re-surfaced and lights have been added to make the lot friendlier for users, says Fish.

The updates cost the school just over $300,000, which will be covered by a price increase for permits in that specific area. However, parking prices throughout the different zones of Trent, (red, blue, green) are still among the lowest prices in the province. Trent’s parking information website indicates this and it is corroborated by rates listed on other institutions’ websites.

Pay-and-display parking prices have gone from 6$ to 9$ for the day. Meanwhile parking rates have also increased for people purchasing long-term permits, their prices (with the exception of green rates which have been spiked to pay for the re-surfacing) have increased 3%, one point higher than the annual average increase to account for inflation.

This slightly higher increase may have to do with some of the changes stated in this article. It may also be needed to balance the parking budget, which received a $60,000 expense for snow removal. This expense was formerly a part of the TCSA budget but was shifted to its proper place in the parking budget last year.

“We take a holistic approach to our parking budget, which means we aren’t just focused on funding parking, but also transportation.” This means that the parking budget is siphoned to make the campus more accessible for people arriving in ways other than cars, whether that be by foot, bicycle or the bus as many students do.

One such project which has been started is clearing a safe and visible path from the Water St. apartments to campus. To be clear, this initiative was not only funded by parking, but also with the help of the TCSA, Housing, and London Property Corp.

Although brush has already been cleared making the trail more open, there are plans to expand on this by laying asphalt down and adding lights. While clearing space for the trail there was a supposed archaeological site discovered, which has been encircled by a fence and will be preserved from the development.

As of the submission of this article (August 19th), no work has been done to add lights or asphalt. The project is supposed to be completed by the time students arrive.

Parking Services will be monitoring parking demand closely this year to determine whether further changes have to be made to compensate for the closing of the Bata parking lot. “I hope we don’t have to put more parking lots in Trent, as nice as the new green parking lot is – it’s nice for a parking lot.” says Fish, “I would prefer we had a field there. I would like to use as little space as possible for parking, I would like to keep as much of the campus green as possible.”

Ultimately, these changes are going to mean more walking for people driving into Trent, but Fish doesn’t think it is a bad thing. “I make a point of parking in the green lot every day and walking to my office (in Blackburn Hall). I think the 20 minute walk every day is good for me. Getting some walking in before being sentry is good for us.”