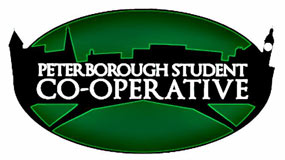 Written by
Matt Davidson
and
and

Twelve years after Trent University sold the Peter Robinson College, a student initiative is hoping to reclaim the old campus.

Already, the buildings that once housed new Trent students have become the home of the Peterborough Student Co-operative. Within the next five years, those buildings may be student-controlled.

Established in 2009, the Peterborough Student Co-operative is looking to establish a co-operative-based student and community residence in downtown Peterborough. An agreement with the current landlord of the Peter Robinson (PR) properties has moved that project forward, giving the Co-op a home.

With Sadleir House now intending to purchase the PR properties, members of the Co-op are hoping that the dream of having a student-controlled residence will be realized.

“The Co-op initiative began in response to Trent closing residences at Traill College and then over-booking the residences on Symons campus,” explained Elizabeth Thipphawong, the Coordinator of the Co-op.

“There was a need for affordable, quality student housing which retained the sense of community that came with Trent’s college system. We’re very pleased that we are able to provide this at the very site of one of Trent’s founding colleges.”

Thipphawong likens the Co-op initiative to the project that led to the purchase of Sadleir House by the student community in 2004.

Under the tutelage of then-President Bonnie Patterson, Trent University had moved to sell off the historic PR campus during a major neoliberal restructuring of the school. The university community strongly opposed the plans and, following a long campaign of protest, the student body collectively purchased the focal point of the campus.

“The Student Co-op initiative operates within the same spirit of student activism as the campaign to keep Sadleir House within the university community,” Thipphawong told Arthur.

“Not only do we hope to expand the student and community controlled space within the historic PR College, but we will be working closely with Sadleir House to do so.”

Sadleir House recently announced plans to purchase the PR townhouses, and are hoping to raise a million dollars over the next five years to do so.

Though Sadleir House and the Co-op are separate entities, if Sadleir House is successful in purchasing the properties adjacent to it, it will mean a secure location for the Peterborough Student Co-operative.

“Sadleir House has been a strong supporter of the Co-op, and they have indicated an interest in seeing the Co-op permanently based out of PR,” Thipphawong noted. “It was our dream when the Co-op started to take back this campus for our community.”

For more information about the Peterborough Student Co-op, visit http://trentcoop.wordpress.com/

What We Know About Vaccine Exemptions At Trent
By
Katie Pedlar
and
From Matt Davidson
Hmmmm...
It looks like there's nothing else from this author. Perhaps you, the reader, could
pick up the pen and begin where they left off.
Culture
|
Arts