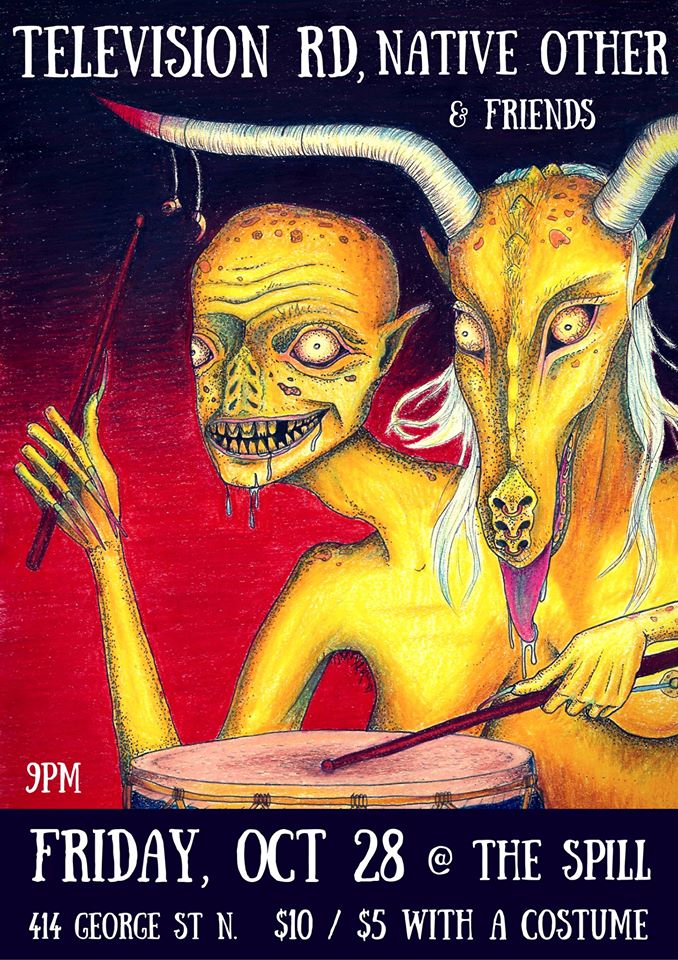 There are always at least three shows happening simultaneously if you walk down George or Hunter Street—even on a Monday! It’s one of the quirky and beautiful things about living in Peterborough. The life, the action, all the disparate stylish folk nodding their heads to the sweet local tunes produced here, is all part of the rich arts scene that permeates this city. It can be overwhelming to pick out which show to hit up, so let me make this easy for you. Come October 28th, The Spill will be the place to be. Peterborough’s Television Rd and Stunspore will be hitting the stage with Oshawa’s Native Other and Bolete, who hail from Guelph.

Let’s face it, it only makes sense to be at a Television Rd show on Halloween. The genre-bending, schizophrenic spooky rock these guys produce takes the brain into the darkest caves of existence, and then shakes it out again with high-pitched reverberations and wails of life and story-telling. For all you jazz lovers, TV RD won’t leave you left out. The bluesy undertones and smooth vocals of Sara Ostrowska will fulfill those late October jazzy-blue cravings you so desperately seek. Last year’s Halloween bash with TV RD consisted of an audience fully clad in costumes of every kind, and a full house at The Spill. This year will be no different. With two full-length albums titled Banshee Cypher (2015) and Character Splatters (2014), TV RD has a lot of material to share with us . Sara's Gaga-esque abject stage presence will subvert expectations, and the skilled instrumentals of the band will satisfy the pickiest listener. Keyboardist, occasional guitarist and melodica meddler Dan Collins adds a certain instrumental eccentricity that echoes through the set. Drummer Dan McNally and bassist Colin Russel are a dynamic duo that play well off each other’s strength and add a defined backbone. Lead guitarist Duncan McRone has a classic sound that gives Television Rd that classic indie vibe. Television Rd has played at various Trent events, has been featured in Electric City, Exclaim!, Chex Tv, The Wire, The Scene Magazine, Bucketlist, and was labelled a “Hidden gem” by Revue. Fun fact: Sara is an ex-Arthur editor. Who knew.

Now, on to Native Other. First of all, what a dope name. These guys have been emerging in the scene over the past couple of years and have very recently released a new EP titled If I Can Keep It Together, with an impressive single titled “Palms”. These guys are the definition of smooth and satisfying indie. They break the molds of timing constraints and breach barriers with Tame Impala and Dance Gavin Dance-like guitar riffs and floating vocals reminiscent of The Weeknd and Bon Iver. A unique guitar tone gives Native Other a fresh and uplifting sound even when the lyrics may not be as uplifting. Falsetto melodies weave effortlessly with intricate riffs that stop and leave the listener hanging, until grooves break along with fulfilling verses sung by vocalist Curtis Skeete. The band is composed of guitarist Christopher Russo, who is also in in surf-rock indie band Viva Mars, drummer Scott Girouard of the well-loved Oshawa group Enter Ghost, as well as bassist Shawn Murphy who used to play with a band called Seth. Point is, these guys are heading an hour north of Oshawa to deliver some of the most unique indie sounds the Ontario music scene has to offer right now. You probably shouldn’t miss it, for like, anything.

In addition, Middle-Eastern psychedelic freak-out jam rock players Stunspore will be hitting the stage with a powerhouse of lucid sounds. Stunspore is a guitar and and drum duo consisting of two mysterious Peterborough musicians. You'll have to come see for yourself. Guelph’s Bolete will provide jazz-improvisation as a trio, with a combination of cello, bass and drums.

This is going to be a dynamic and colourful night full of costumes, mystery, genre-melting sound waves with revelry and music you are guaranteed to appreciate. Angelica May, infamous radio personality from the Peterborough Pajama Show featured on Trent Radio, will be the MC of the night. You will also be able to get your fortune told! TV RD, Native Other, Sunspore, and Bolete are playing on October 28 at The Spill. Doors open at 9:00pm and the party will rage on until last call. Bring $10.00 to the doors, or, if you’re wearing a costume (why wouldn’t you be?) it’s only $5.00! Don’t have a costume? No problem. Dust off that old mask you wore in grade 5, or throw on a weird vest and put on some absurd face make-up. When people ask you who you’re supposed to be, ask them, WHO ARE YOU SUPPOSED TO BE!? You can be anyone you want to at The Spill. No pressure. Safe space. Good music. The night is all ages, so bring your little brother or sister or grandparents. Trick or treat, go to The Spill and take a seat!