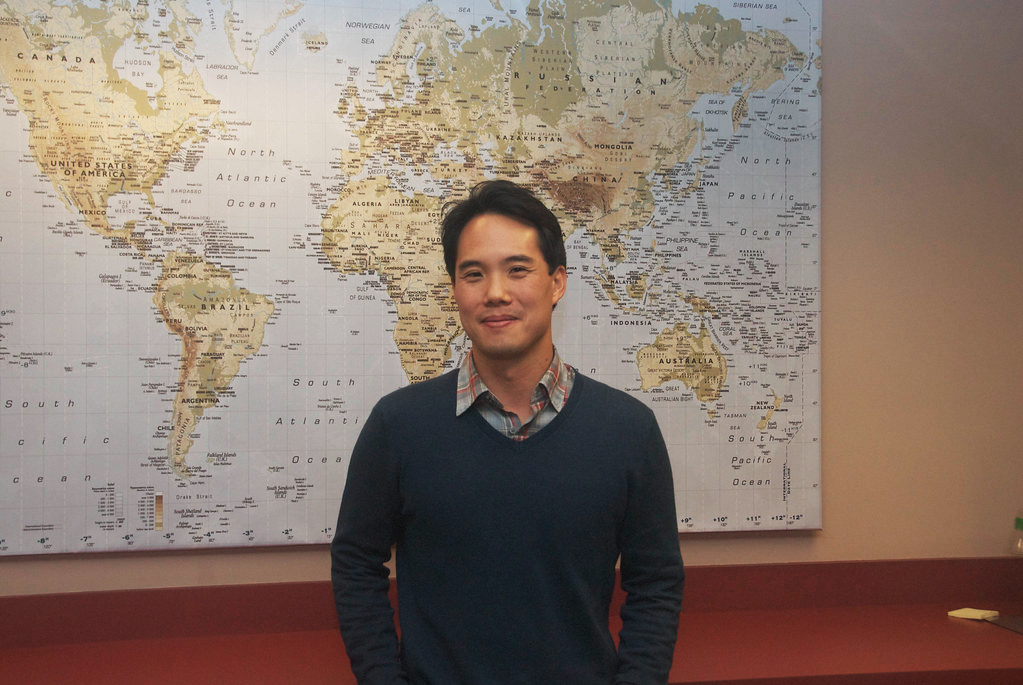 The Arthur Literary Review: Charles Yu Wants You To Know That There Are More Asian Stars Than Kung Fu Guy

Charles Yu — story editor for HBO’s Westworld, and author of the 2010 novel How to Live Safely in a Science Fiction Universe — has crafted a complex deconstruction of the contemporary Asian identity in his new novel, Interior Chinatown (released earlier this year from Pantheon Books). The novel’s narrative, formatted in a faux screenplay format (complete with requisite industry standard Courier serif typeface), deals almost entirely in stereotypes. It is deceivingly simple. The protagonist, Willis Wu, has long dreamt, ever since he was a little boy watching TV in his parent’s cramped Chinatown apartment, of being Kung Fu Guy. He is in reality, however, only a Background Oriental Male. Before reaching the status of Kung Fu Guy, an Asian American has to rise through the ranks of: Background Oriental Male; Dead Asian Man; Generic Asian Man Number Three (Delivery Guy); Generic Asian Man Number Two (Waiter); and Generic Asian Man Number One. After reaching this last stage, an Asian man can hope for a Special Guest Star role on the national hit show, Black and White, as Kung Fu Guy. The overtness of stereotypes in the novel’s language is so blunt and obvious that it’s often laughable. However, Yu employs our shared understanding of Asian media stereotyping, utilizing it in order to undermine it. He illustrates, through dark humour, the absurdity of Western (here, specifically American) entertainment's mistreatment of the Asian identity.

The novel is thick with old Film Noir conventions, yet the plot is set during the present day. This is how far we’ve progressed, regarding the representation of Asian stories and characters, which is to say not very far at all. The book aims criticism at the coveted role of Kung Fu Guy, still frozen in the 70s and earlier. It is, culturally, not good at all that we know exactly what Yu is referring to, regarding the relegation of Asian bodies to the fringes and background roles. The reader can imagine perfectly, recalling the last TV series or movie they've watched, how little the Asian identity was represented during the runtime. Yet, at the other extreme, must the starring role for Asian bodies continue to be a slickly modern echo of Bruce Lee from half a century earlier? This lack of diversity immediately calls attention to itself as a problem.

The novel is presented as a lengthy screenplay, so here is a fun fact: within the film industry, each page of a screenplay translates to about 1 minute of screen time, which would make a hypothetical direct adaptation of Yu’s text a particularly long movie, with its 266 pages equalling about 4 and 1/2 hours of runtime. The narration often deviates from the parameters expected of its screenplay framework, easily lapsing into prose-style backstory for important characters (such is the case with Wu’s parents, their stories of immigration and everlasting-if-unsatisfying love). Yet, even passages like these continue adhering to the novel’s custom of referring to characters predominantly by their assigned roles (e.g., Willis often refers to his father as Old Asian Man, even when they are not on the set of Black and White). Yu, despite his stylistic breaks, wants the reader to know that Asians having to play roles is a constant in his world, just as it is in our own. These roles are not exclusive to Hollywood, or even the entertainment industry as a whole. It is only that film and television culture still abides by a system of offensive labels, their behind-the-scenes language thick with short forms derived from a history of systemic racism. It continues to refer to oppression in brutal, plain, out-in-the-open terms. Wu gets into a heated debate about this very system of language and oppression on the set of Black and White. One of the show’s main stars, the handsomely tight-jawed Turner, argues that Willis is, even in his fight against the system, merely “going along with it. Look where we are. Look what you made yourself into. Working your way up the system doesn’t mean you beat the system. It strengthens it. It’s what the system depends on.” Turner goes on to say that even he, the star of the show, is trapped within the confines of the system. His (Turner’s) success has meant nothing, systemically. His name isn’t even on the poster. It merely says: Black.

‍Interior Chinatown is a deceptively complex example of metafiction. The novel’s style is clean and easy to follow, making it a smooth read for those indifferent to structure or form. However, the narrative’s embrace of this blur between screenplay formalism and a self-referential stream-of-consciousness prose quietly Trojans in the intricate guts of a highly experimental novel. The result is something quite surreal. When is Willis on the set of Black and White? When is his work over? When is he not performing? When he is at home in his cramped Chinatown apartment, is he still really only Generic Asian Man?

These questions become less clear as the story progresses, illustrating through narrative muddiness the novel’s philosophical thesis: that it is a struggle to articulate one’s own oppression while simultaneously avoiding the invalidation of much louder fights against oppression happening throughout the culture. At one point, while on a smoke break, Wu looks up and sees a large Black and White billboard high above him. It takes up so much space. The message is clear; even the city’s skyline is principally concerned with the relationship between Black and White (with a long running trope on the show being a will-they-or-won’t-they tension of a possible kiss between the mixed-race co-stars) while remaining indifferent to Wu and everyone else who looks like him. Again, the blatant imagery used to articulate Wu’s despair might make the reader laugh, but this laugh ends up being one of discomfort. Yu is not strong-arming some squishy All Lives Matter pitch. The novel does not knock the importance of reparations, nor does it treat the achievement of equity with respect to racial inequality (Black Lives Matter, while not named in the book, has its presence felt throughout the narrative, insinuated along the fringes) as an unimportant goal. What is being articulated is collective uncertainty, where a group must speculate, as in the dark, about where lines are drawn between those suffering under opression, searching to define what they share and what is uniquely their own. For those who are not-similarly-yet-pretty-equally hated and/or discriminated against, what does their emancipatory action look like? What is their dialogue, and where does it fit in? Yu's answer is an optimistic one, as the narrative advocates for a collective rewriting of systemic stereotyping, spearheaded by cooperation on all sides, from the inside-out, beginning with the language we share. I will not spoil how Yu arrives at this, but it is beautiful.

‍Interior Chinatown liberates the Asian stereotype from within the language of stereotypes, wielding showbiz vernacular to make a point about linguistic emancipation, serving as a cautionary tale for all who perpetuate those same systems of cultural segregation and oppression. Yu is up for the National Book Award for Fiction this year, and — for the reasons listed above — I hope that he wins.