"Black Lives Matter, Anti-racism rally at Canada Place" by GoToVan is licensed under CC BY 4.0

Canada, The Land of Equality, Diversity, and Racism

Written by
Sutton Hanna
and
and

"Black Lives Matter, Anti-racism rally at Canada Place" by GoToVan is licensed under CC BY 4.0

When I was younger, I dreamed of coming to Canada. To me, Canada symbolized the land of opportunity, freedom, and acceptance. Though that was a naïve view to hold, as this country has been deeply anti-Black, and its history includes many instances of anti-Blackness. I didn’t know that of course, as Canada had branded itself as a multicultural melting pot, but that could be the furthest thing from the truth, as I have come to experience it. It’s either you adapt to the dominant (white) culture, or you get ostracized for having not done so.

I remember the naivety I once had about Peterborough as well. I thought it was a small, picturesque town in close proximity to Toronto, and that’s in part why I came here. I had never expected to experience racial violence here, but again, had I known better about Canada, I would’ve been better equipped to live here and in Peterborough.

I also interviewed some close friends of mine from my home country (a predominantly Black country). One friend said she thought of Canada as a mosaic melting pot of culture. She had been contemplating university in the United States, but then things would happen like the murder of Trayvon Martin, and the continuous police killings of unarmed Black people, and that discouraged her from going there. She thought Canada would be better, she thought that there was no racism here.

She also notes that Canada does an exceptional job of hiding its past and that she had no idea about the plight of Indigenous Peoples. She recalls coming to Canada and learning over time that Canada was not perfect, but it still tried to maintain this image. She recalled experiencing microaggressions at an academic skills appointment as one of the first times she experienced racism in Canada. In Peterborough, particularly, she shared that the racism here is looming. She expressed feeling out of place like she does not belong, something I empathize with all too well.  An explicit instance of racism that she experienced, was being surveilled by a Walmart employee that assumed that she was stealing because she was dancing into the camera. She says Peterborough is isolating and lonely for Black folx.

Another friend of mine had no preconceived notions about Canada before his arrival. He said he knew it was a safe space for queer people, but like myself and my other friend, he was unaware of its racist past, and present. He expressed racism in Peterborough as being either covert in nature, or explicit in nature. He shared his experience of racism in academia at Trent. He recalls being referred to academic skills, and one of the advisors would question whether what he wrote truly belonged to him or if he plagiarized his work. When he would iterate that the words belonged to him, she insisted they were from other sources, as she deemed them “too eloquent” to belong to him. In retrospect, he realized this was an act of racial violence. It was her subtly asserting that Black people were incapable of writing brilliant works.

He has also experienced outright racial violence, being referred to as a “nigga” by a white woman at the Peterborough bus terminal. He was too encompassed by shame and rage to even dignify her violence with a response. He also had the cops called on him and a few friends during a summer outing by a neighbour. The friend that he was visiting was the only Black person that lived on that street. He expressed this instance as a clear sign of anti-Blackness.

For me, I remember my first year of university in Peterborough was a culture shock. I had experienced many micro-aggressions, like one of my white roommates asking me my opinion on non-Black people using the n-word. I also recall a time, when I was walking behind a girl that I had befriended, and she was in casual conversation with another person, and she dropped the n-word so casually. Unbeknownst to her, I heard her, and I never viewed her the same. I remember feeling so betrayed by that particular interaction, I also remembered how isolating these experiences made me feel.

I recall another instance of racism, where I was at a popular restaurant here in town with another BIPOC friend, we were the only BIPOC at the restaurant, and we had not been served. People, white people, came in after us, were seated, and served quickly. I remember this is my first experience of covert racism. The first time I experienced outright racism was by a Trent residence life don, who had threatened to call the cops on my friends and me, (all of whom were Black) because there was a noise complaint past quiet hours. I recall my white counterparts, doing far worse and never getting threatened with the cops, but somehow a group of Black kids assembled for a birthday party warranted  the presence of the police.

These experiences were harmful to my friends and me, but they encouraged us to go and seek community with our kin. They strengthened bonds with other Black folx, and they opened our eyes to our naivety on the issue of race in Canada. Canada is not racist-free. Peterborough is not welcoming. Trent is not a safe place for Black students. With that being said, it is important for white people to be actual allies to Black and Indigenous folx and it's important for Black folx to forge community and safe spaces amongst themselves to avoid feelings of alienation. 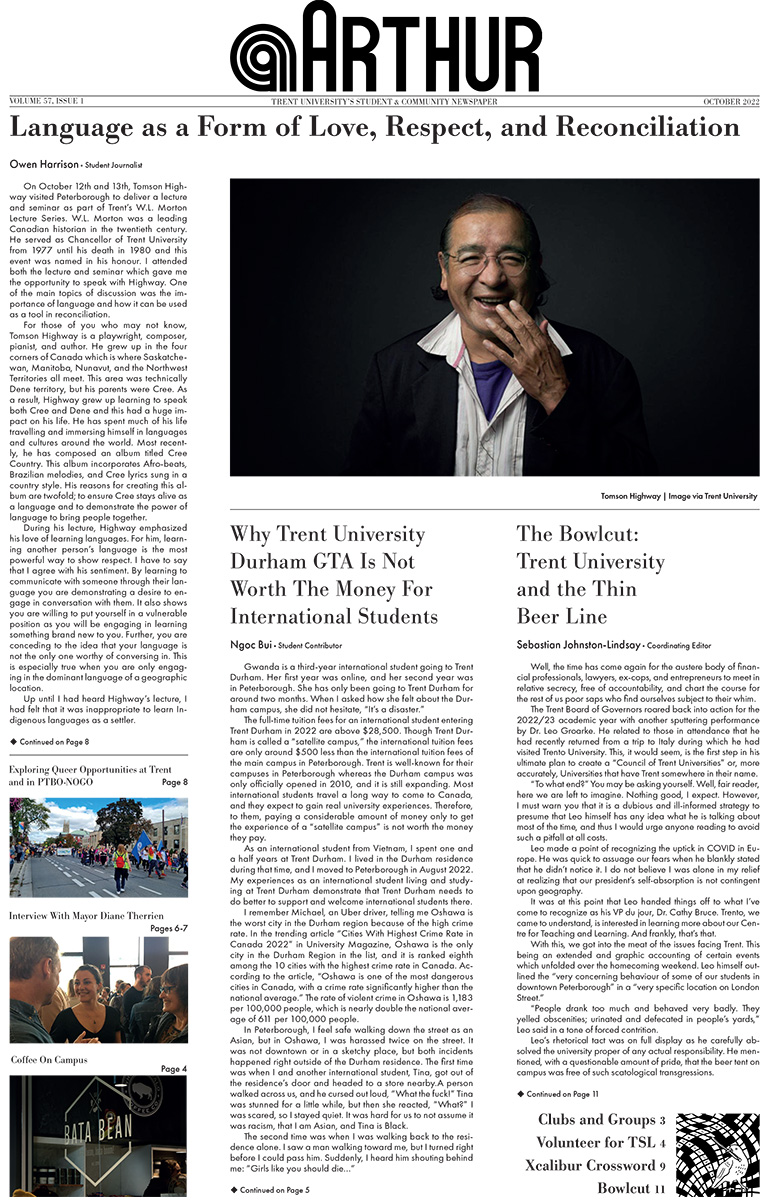 The Anti-Racism Task Force: Performing or Performative?
By
Varun Biddanda
and
From Sutton Hanna
Hmmmm...
It looks like there's nothing else from this author. Perhaps you, the reader, could
pick up the pen and begin where they left off.
Culture
|
Arts 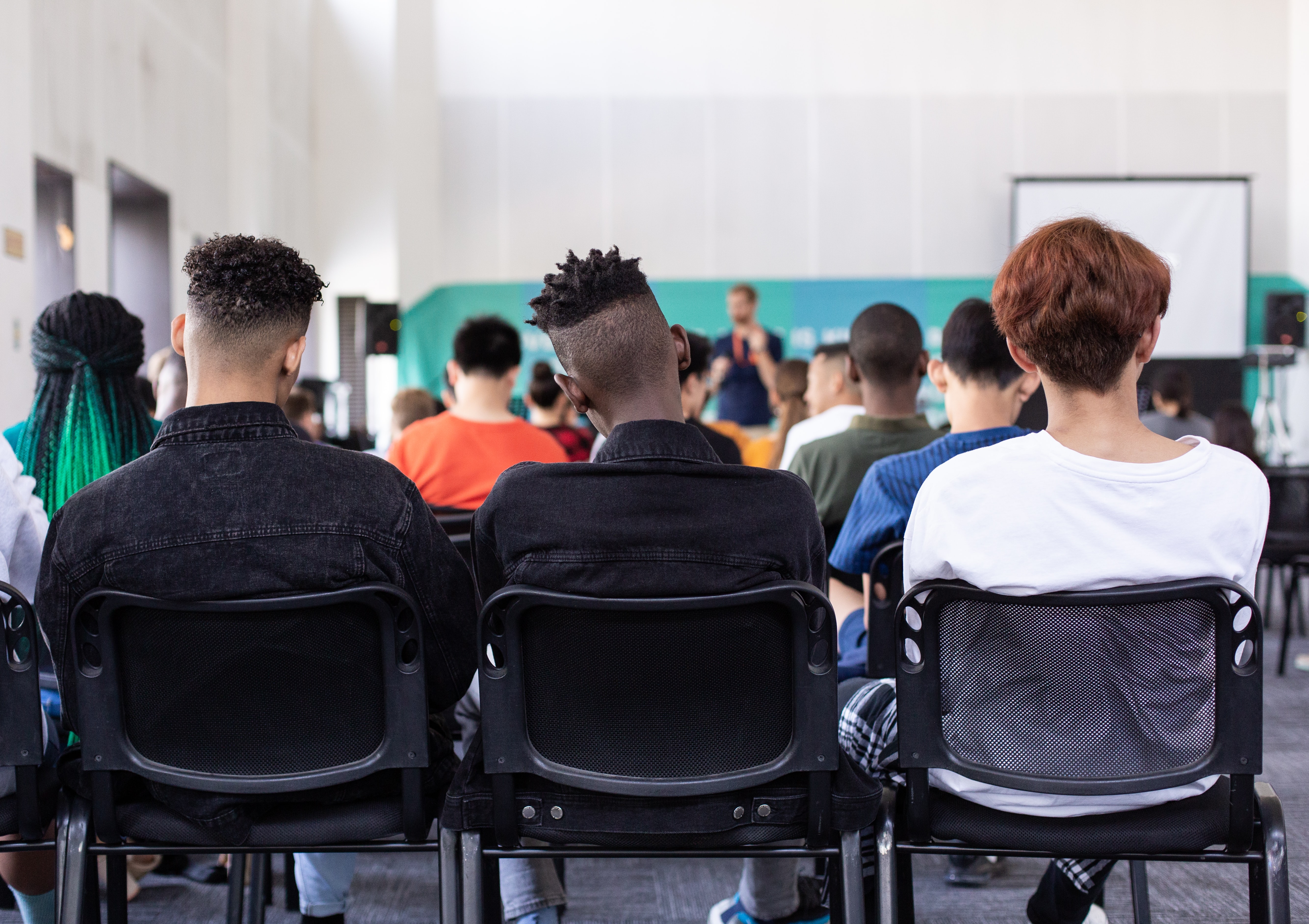