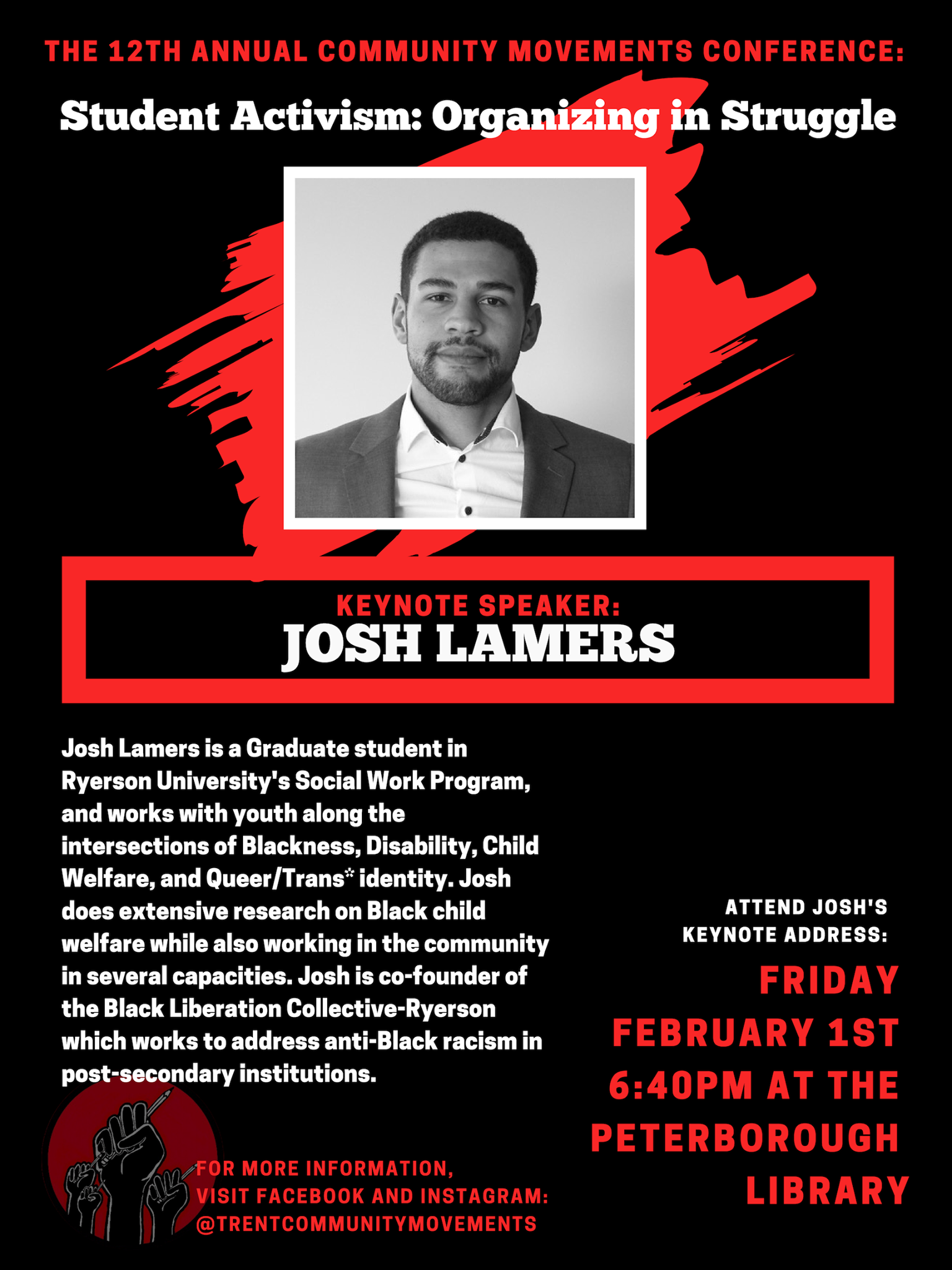 Josh Lamers, keynote speaker of this year’s Community Movements Conference, spoke to a full house at the Peterborough Public Library on Friday February 1. The opening night of the conference also coincided with the first day of Black History Month, and Lamer’s speech could not have been better suited for the occasion. Lamers, a student of Ryerson University’s Masters of Social Work program, holds an impressive resumé. As co-founder of Black Liberation Collective-Ryerson, Lamers has also worked for The Ontario Children’s Advocate, the African Canadian Legal Clinic and the Collective of Child Welfare Survivors. Lamers spoke about some of the theories that shape his social work practice, while providing the audience with concrete strategies and resources for their own activism. Furthermore, Lamers spoke honestly with the crowd about his experiences growing up in Midland Ontario, as a black child raised by white parents and with an adoptive brother living with autism and very few government supports.

In his speech, Lamers addressed the elephant in the room: Doug Ford’s recently announced cuts to OSAP funding, the elimination of the Free Tuition grant program and the announcement of new provincial legislation regarding student union and levy fees. Lamers spoke candidly to the audience and even went so far as to point out that the CMC is also funded by levy money and may not be able to function in the same ways in the years to come. Although it is easy to catastrophize these changes, Lamers urged the crowd to think in terms of meaningful action, engagement and disruption.

Lamers presented the audience with his arguments regarding the university as an extension of unequal power structures which serve to oppress the racialized, queer, transgender and otherwise vulnerable student subjects. Within this system, Lamers argues that activism must be seen and approached as a form of complaint against anti-black racism at an institutional, campus and classroom level. Lamers pointed to his work with the Black Liberation Collective and their work to expose what he referred to as “The Brutal Imagination” of the university. He pointed to what he called “methods of exhaustion” wherein the university seeks to take advantage of the natural cycle of students in and out of the institution, by waiting out student concerns through the timelines of student graduations. Lamers cited the stress of course work, time management, part-time jobs and the slow pace of bureaucratic progress as reasons for why student activists are often forced to abandon their causes before a meaningful solution is found. In acknowledging this, Lamers also pointed out that the institution is aware of these factors and often uses the illusion of progress to weed out those who are less willing to commit.

The information presented by Lamers, in the context of black racial justice, can be applied to better understand many of the issues at the core of the contemporary student movement today. The Ford government’s cuts to tuition fees have placed the burden to absorb these costs on universities and their administrations. Coupled with the new legislation involving OSAP grants and loans, student levy fees and student union dues, marginalized students face a daunting future filled with a multitude of uncertainties. Programs which aren’t deemed “profitable” will now face increasing scrutiny and possible elimination, regardless of the intellectual advantages and opportunities they offer to the students.

In the context of Ryerson University, Lamers expressed his concerns regarding diaspora focused course content, permanent black faculty, and protections against unfounded complaints for black faculty who push boundaries in their field. Lamers went on to explain that black students were among the first to bring up their concerns regarding student levies and the impacts of potential cuts during the November AGM of the Canadian Federation of Students. The message was clear: students who value the security and prosperity of marginalized students on campus should be gravely concerned by the Ford Government’s attack on levy fees and student unions.

According to Lamers, there are three basic principles to effective resistance: creativity, disruption and investigation. These ideas translated into both days of the Community Movements Conference, which focused on the transformative power of art, the student press and representation in political action. Inspired by the successes of the student movement and organized labour, the conference featured speakers such as Diane Therrien, Kemi Akapo, Sara O. Shahsavari as well as contemporary student activist voices. Conference attendees were offered a selection of vegetarian meals from Food Not Bombs and the opportunity to connect with like-minded peers.

During his keynote, Lamers spoke to the importance of what he refers to as “activist lineages”. These lineages allow younger generations of activists to understand the work that has come before them. In a way, this is the most valuable experience provided by the CMC – the opportunity to investigate Trent’s activist lineage.

In the face of austerity, an understanding of the activists who have come before us is critical. In the 1960s, when the Peterborough Examiner went on strike, Trent students and local labour activists joined forces to create a strike paper. This paper, “The Peterborough Free Press” put out the news without crossing the picket lines. In the 1970s, Trent students staged a sit-in to protest the tuition hikes for international students and demanded that the administration denounce the hikes to the Ontario ministry of education. Throughout the 1970s and 80s, Trent was known to RCMP surveillance teams as a hub for radical activists with the power to disrupt the status quo. In the 2000s, Trent activists who later became known as “The Trent Eight” staged a protest in response to the proposed closure of Peter Robinson College. The ensuing student organizing resulted in the repurchasing of PRC by and for the students and the creation of Sadleir House – a vital downtown student hub and home to the offices of many student levy groups such as Arthur, OPIRG, The Centre for Women & Trans People, and more.

For many, these activist lineages are what made us choose Trent in the first place. Trent offered the opportunity not only to learn about the world we live in, but to learn how to change it for the better. It’s this vision of the university experience which we must now fight tooth and nail to protect. Knowing that our education has been made richer through the work of those who came before us, we must now apply what we’ve learned towards a better future for those who will come after us.

“Students Want to Be Students”: The Housing Crises in Toronto and Peterborough
By
Elizabeth Beaney
and
From Zoe Easton 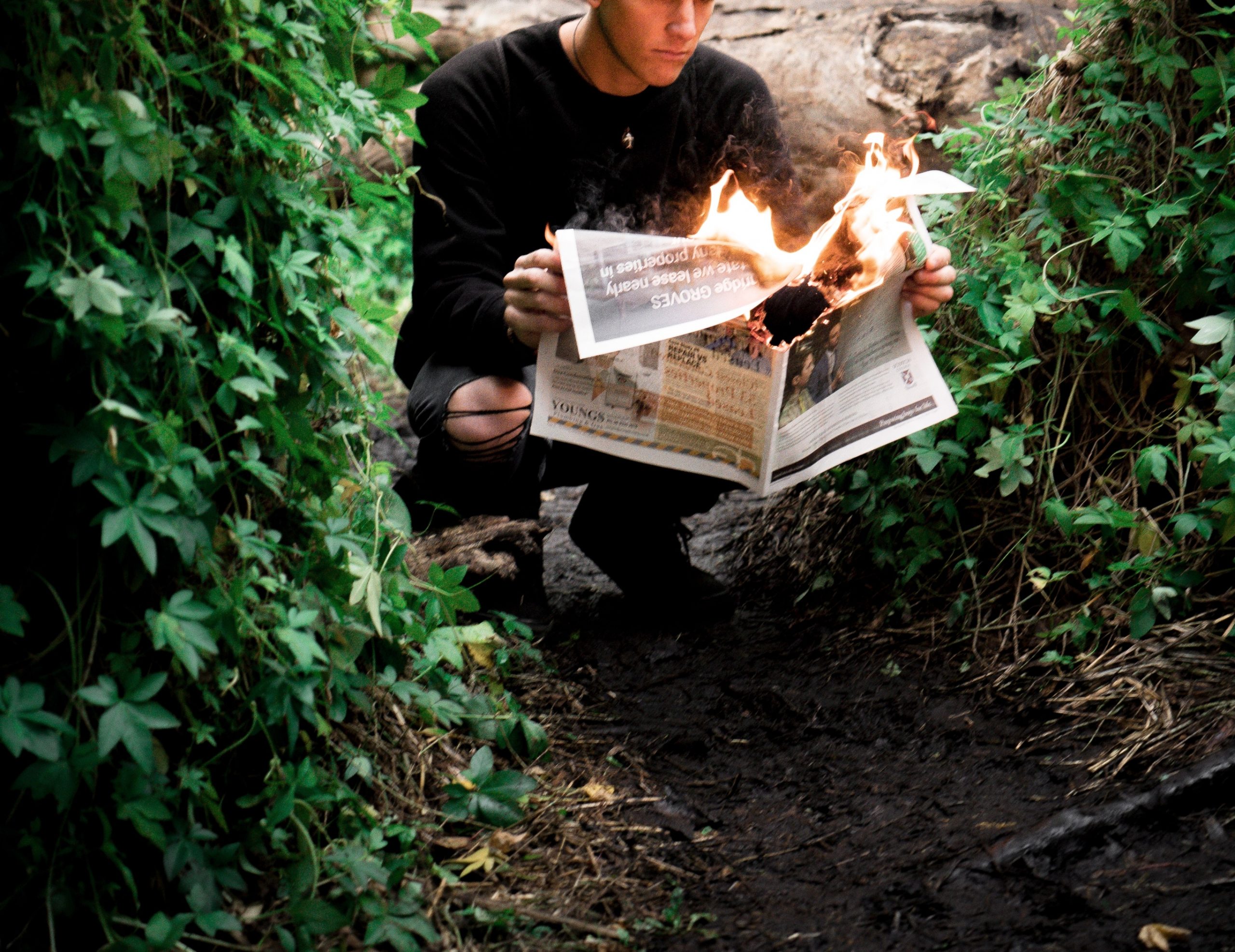 Examining The Examiner
By
Zoe Easton
and
Culture
|
Arts

“Students Want to Be Students”: The Housing Crises in Toronto and Peterborough
By
Elizabeth Beaney
News
|
Campus