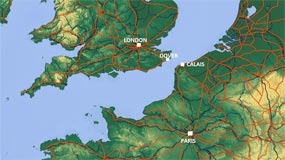 Written by
Daniel Martin
and
and

On the edge of the centre of town, an abandoned recycling factory sits at 10 Impasse Des Salines.

Here over 100 migrants sleep at night and a further 300 arrive during the day to use the basic facilities and have access to, what will be for some, their only meal of the day.

The squat was occupied on the 12th of July and as of 24th of July, is facing eviction. A court order was served on Thursday requiring all the occupants to leave the 12,000 square metre location which means the police can turn up at any point to evict them.

The squat, thought to be the largest in Europe, will be a test for the French government – if Calais’s Mayor Buchart wants to remain defiant in her stance against migrants she will have to come down strong, unfortunately for the occupants.

Taken on July 12, the squat was in response to a mass eviction of four squats including Salam, a food distribution point located near the port on July 2. In total, over 500 were evicted from Salam and a further 70 from the other three squats.

The raid carried out by the CRS riot police and PAF border police rounded up over 300 and took them to detention centres in Coquelle, Lille and Amelot. Everything the migrants owned, including their determination, was destroyed.

Cases of police brutality are common among migrants and supporters alike; harassment, beatings and destruction of property is an almost daily occurrence with the migrants largely unable to legally challenge the authorities.

Organisations such as Medicine du Monde and Calais Ouverture et Humanite continually provide support in the form of showers, toilets and tents, not only at this squat, but at other camps the migrants have themselves built.

Without that, the situation would be even worse with migrants requiring medical aid and food daily. An old house within the squat containing sleeping spaces, a kitchen and several toilets serves as a focal point for the remaining courtyards and three closed hanger spaces.

Language classes, rights workshops and film screenings are organised to provide a level of education and to lighten the atmosphere.

Artwork adorns the walls of the courtyards, each picture drawn telling the story of a battle for freedom and for a better life free from state persecution.

The migrants are coming from Darfur in Sudan to Jalalabad in Afghanistan, and everywhere in between, having continually faced oppression from the police, local fascist group Sauvons Calais and mayor Natacha Bouchart.

For most, getting to Calais was not easy with each and every person having a harrowing story to tell of danger, death and deportation. They risk their lives every day, attempting to make what is for some a fatal crossing to England where they hope to gain asylum, having been all but shunned by the French Government.

They therefore exist in a quagmire. Some, despite the turmoil in their country of origin, go back through voluntary deportation that is offered by the French Government with the occasional migrant being able to claim asylum in France. However, for the majority, these options do not exist or are not viable alternatives.

The situation now in Calais has gotten even worse, and whilst the squat’s population has grown, support is still needed.

A demonstration was organized in early September between the two opposing forces, the fascists and anti-fascists, drawing people from both affiliations across Europe.

Several days following the demonstration, beatings occurred by both neo-nazis and police alike, several Sudani migrants were hospitalized as a result.

With all the recent turmoil the migrants have faced, there seems to be little chance of a reprieve in sight. The migrants are still in urgent need of resources, lacking basic equipment, e.g. tents, cooking equipment and so on.

Without such support, a lot of which is provided from organizations and locals, the daily struggle to survive both by activists and migrants alike will be a lot harder than it already is.

There have been repeated calls for the French government to act on the situation but to no avail. The government will not pursue long-term solutions to a problem it fails to recognize as being self-caused.

A refusal to recognize the migrants is a refusal to allow these people the right to live, which constitutes a violation of basic human rights.

What is needed is for more people to go to Calais, to provide the desperate support required and to put increasing pressure on Natacha Bouchart to accept that it is not just the UK’s problem.

Open Letter to Trent Security re: Racism on Campus
By
Domenica Othwolo
and
From Daniel Martin
Hmmmm...
It looks like there's nothing else from this author. Perhaps you, the reader, could
pick up the pen and begin where they left off.
Culture
|
Arts

Open Letter to Trent Security re: Racism on Campus
By