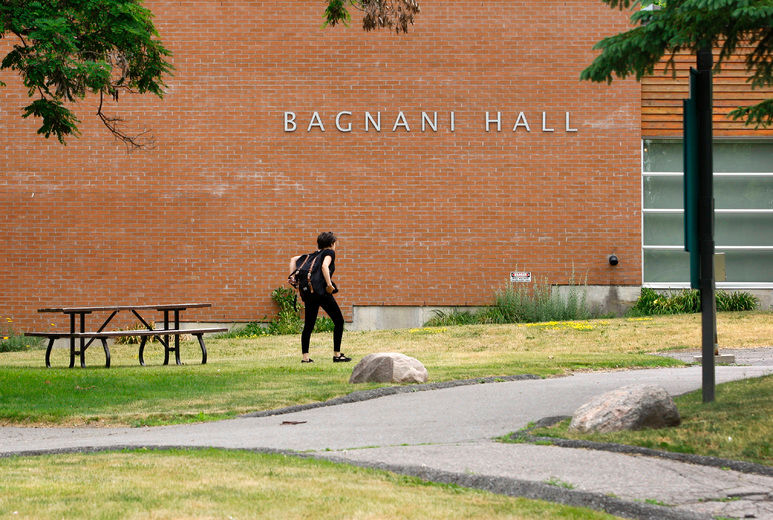 Bagnani Hall from a short distance. Photo via The Peterborough Examiner.

Bagnani Hall from a short distance. Photo via The Peterborough Examiner.

On the evening of October 18th, approximately 50 people piled into Bagnani Hall at Traill College for the Vanier Lecture. This event, hosted by Trent’s very own Professor Joan Sangster, was entitled “Questioning Canadian Colonialism: Histories of Indigenous-Settler Relationships.”

The event began as most events at Trent University begin—with a land acknowledgement. Then, a colleague of Professor Sangster rose to provide the audience with an introduction to our lecturer. He attempted to briefly summarize Sangster’s accomplishments but it was no small task considering just how illustrious Sangster’s career has been. During the 30 years Professor Joan Sangster has spent at Trent, she has chaired both the History and Women’s Studies departments, been a Dean, authored 7 monographs and edited 11 collections. Most notably, Sangster is the only faculty member in Trent’s history to have received both the Symon’s Teaching Award and the Trent University Research Award. Additionally, Joan Sangster has been the President of the Canadian Historical Association.

I’ve been to my fair share of events like this one, and I’ve noticed that often times when a scholar as accomplished as Sangster takes the stage, they do so with an air of arrogance. Sangster was the exception; she was almost embarrassed to sit through her long list of accomplishments. Her humility was not only refreshing, but it also made me more attentive to what she had to say. She was not there for praise or recognition. She was there to educate. And that she most certainly did.

She began her talk by shedding a bit of light on the event itself. The Vanier professorship, named after Georges and Pauline Vanier is awarded every five years to a faculty member who has excelled in the field of Canadian Studies. Sangster spoke of how fitting it is that this event was named after Georges and Pauline Vanier as they were both heavily involved in human rights—the idea of human rights unequivocally central to the topic discussed that Wednesday evening. Georges Vanier, Canada’s 19th Governor General, was an advocate of the rights of Jewish refugees during WW2 while Pauline played a significant role in the Indian Eskimo Association of Canada, working to improve the lives of Indigenous peoples in Canada. Professor Sangster went on to announce that she will be starting an annual seminar on human rights in honour of Pauline and Georges Vanier.

Sangster then began her talk by explaining to the audience that although the subject revolves around alliances between Indigenous peoples and settlers, it was by no means an attempt to veneer Canada’s colonial history or diminish white guilt or complicity. However, it is meant to illuminate the alliances that created weak spots in colonial ideology and highlight some of the stories of individuals who recognized colonialism’s malevolence as it was taking place.

During the land and dispossession segment, Sangster told the story of Anthony O’Meara, an Anglican minister and lawyer who devoted his life to representing Indigenous groups who had been displaced in the early 1900s in British Columbia. Unfortunately, Anthony O’Meara did not experience a great degree of success in his pursuit of Indigenous rights and became obsessed with his work, eventually leading to the loss of his family, church and reputation. Sangster also shared the story of Sarah Robertson Matheson and Mary Pamela Milne-Home, two upper-class Scottish women who identified with the Indigenous fight against displacement (something many Scots were familiar with) and went to great lengths to advocate for Indigenous peoples in Canada.

Sangster used the culture and questions of authenticity portion of the lecture to expose the way in which several Canadian women advocated for the preservation of Indigenous cultures in Canada and just how pivotal this idea was to the political struggle for Indigenous rights. One such woman was Alice Ravenhill who campaigned for the documentation, conservation and promotion of Indigenous crafts, arts and culture. Another example Sangster highlighted was Nan Shipley, a historian, novelist and journalist who argued for the authenticity of Indigenous authors and writers and spoke out against racism towards Indigenous peoples. In spite of the essentialist arguments these women perpetuated as they advocated for their respective movements, their work still had a positive impact on many Indigenous communities.

Sangster went on to profile the Indian-Eskimo Association of Canada (IEA), a non-partisan, predominantly white organization aimed at improving the living conditions of Indigenous people across Canada. Unfortunately, the work this organization did was often overshadowed by their essentialist and ethnocentric viewpoints that led to a great degree of criticism from young Indigenous activists. This criticism, however, was received quite well and manifested major change within the organization. The IEA did had a huge impact at the grassroots level and focused a lot of their work in Canada’s northern regions, where conditions were often most dire. They advocated for a more accurate Canadian history to be taught in schools and were one of the first organizations to liken Indigenous living conditions to that of the developing world.

The last segment of Professor Sangster’s lecture was focussed on youth mobilization surrounding the Indigenous rights movement. Sangster chose to profile the Company of Young Canadians (CYC), an organization that rose out of a desire for a new analysis of colonialism, one that was left leaning and incorporated the intersections of race and class. This organization often faced a great degree of pushback from both provincial and federal government institutions and its members were often criticized for having missionary complexes or joining because of purely anti-establishment beliefs. Tensions often ran high between Indigenous and non-Indigenous members; however, in spite of all this adversity, the CYC accomplished a great deal, including numerous successful media projects.

Professor Sangster concluded her lecture by noting that many of the examples she discovered in her research were of feminists and Indigenous rights activists coming together to overcome patriarchal and colonial barriers to progress. She highlighted that the need for allies continues in contemporary society as decolonization and reconciliation are ongoing processes and offered this simple advice for individuals striving to become better allies: “Listen and engage with Indigenous people.”

Subscribe to Arthur's Newsletter
Thank you! Your submission has been received!
Oops! Something went wrong while submitting the form.
No items found.
From Nick Taylor 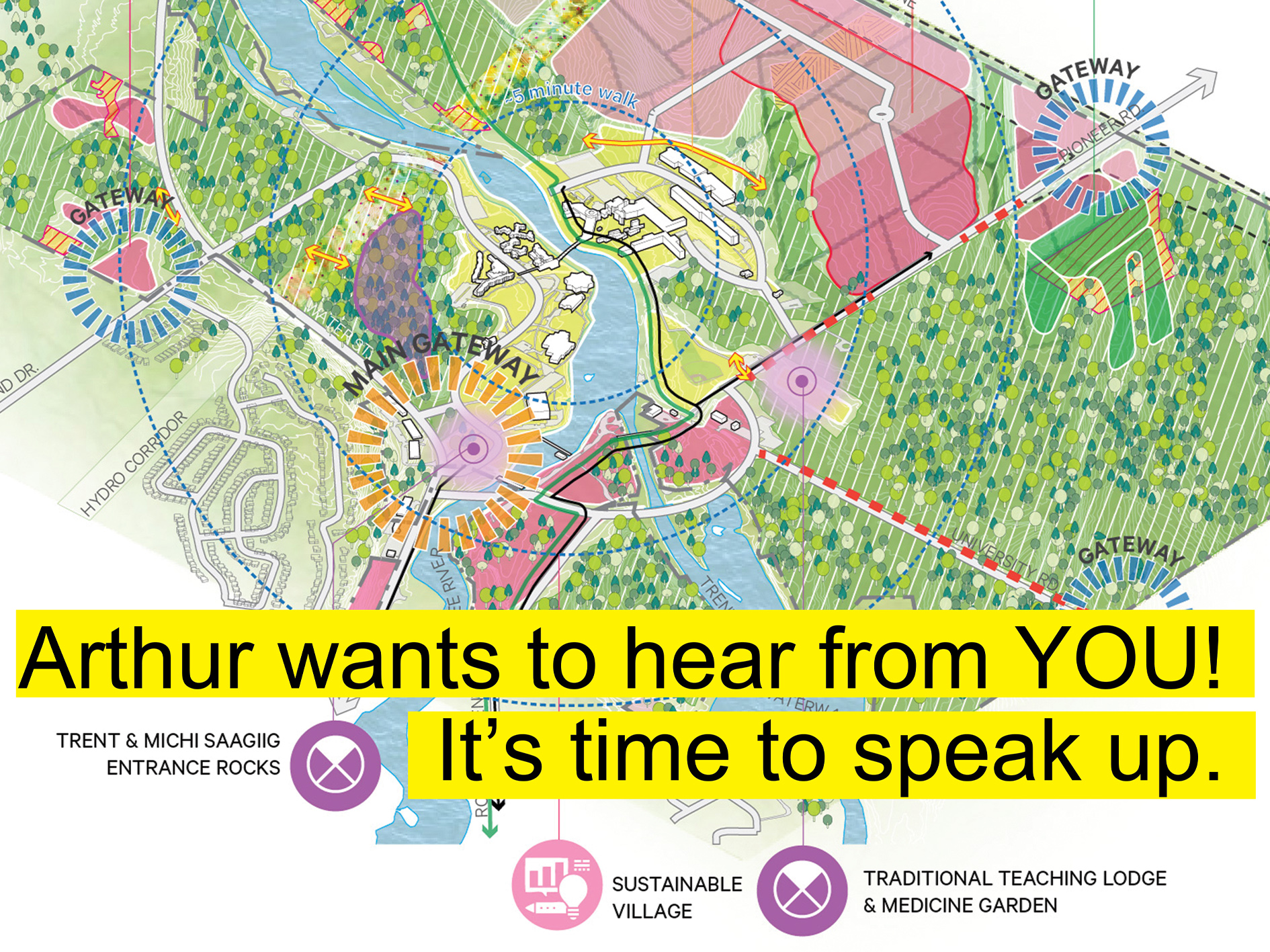 A Call for Stories: the Trent Lands and Nature Areas Draft Plan
By
Nick Taylor
and
Brazil Gaffney-Knox
Culture
|
Arts