"Nationalism and native land" by Marcus Johnstone is licensed under CC BY-NC 2.0

Seven Things Settlers Can Do Instead of Celebrating C*nada Day

Written by
Nick Taylor
and
Brazil Gaffney-Knox
and
Lucas Schaefer

"Nationalism and native land" by Marcus Johnstone is licensed under CC BY-NC 2.0

What does it mean to cancel C*nada day?

The discoveries of what is now over 1 300 Indigenous childrens’ remains found in mass graves at residential schools across the country have spurred a growing cry to ‘cancel’ C*nada day. Many have been left wondering what there is to celebrate on this day, pointing to the ways that C*nada Day is a celebration of colonialism. In many municipalities, this has meant foregoing the usual yearly celebrations. And while our own city council has not taken steps to do this, it does not mean that we have to follow suit. So while you trade your red and white for an orange shirt, Arthur has put together a list of steps you can take towards decolonization on July 1st this year.

If you’re in Nogojiwanong, you’ll have a few different options in terms of local actions you can attend, both virtually and in-person. OPIRG Peterborough is holding a Phone Zap and Letter Writing event from 11am to 12:30pm on Zoom. This event is a direct response to a call to action from Idle No More, and their aim is to hold the government accountable for ongoing colonial violence and genocide. Letter templates and call scripts will be provided to attendees, so all you’ll need to bring is your phone!

There will also be a rally and march in Del Crary Park at 5pm to honour the children lost in the residential school system and stand against the genocide of Indigenous Peoples. The organizers have requested that those participating wear masks and respect COVID protocols. There will be a candlelit vigil following the event, supported by the Kawartha Sexual Assault Centre.

2. Learn about the land beneath your feet!

If you are located in Nogojiwanong-Peterborough or the region, you are on the territory governed by the “Rice Lake Treaty No. 20” (a.k.a Surrender M) of 1818, as well as the Williams Treaties of 1923. You can read the treaty signed by the Mississaugas of Alderville, Hiawatha, Curve Lake and Scugog here. If you’re curious, you can also learn more about the treaties and reserves in Ontario through the provincial government’s website.

The Williams Treaty first nations filed the Alderville litigation in 1992 in effort to regain rights to the land governed under the Williams Treaties. This litigation went to court in 2012 and reached a settlement in 2018. The federal and provincial government agreed to pay a combined total of $1.11 billion to the nations. Each nation was allowed to add up to 11,000 acres to their territories. As well, the settlement re-established the recognition of Indigenous harvesting rights in these territories.

For those curious to learn about the First Nations, Inuit or Metis land you live or work on, check out native-land.ca for an in-depth mapping of traditional territories, languages, and treaties.

3. Brush up on some resources: MMMWG2S National Inquiry Final Report and the TRC’s 94 Calls to Action‍

With the child victims of residential schools continuing to be literally unearthed as we speak, it is critical that we remember that settler-colonial genocidal projects are not a dark and distant past, but describe the unsettlingly contemporary and concerted effort from multiple facets of the C*nadian government to subjugate and assimilate Indigenous Peoples.

In June of 2015, the Truth and Reconciliation Commission of Canada published 94 calls to action with aims “to redress the legacy of residential schools and advance the process of Canadian reconciliation.” These actionables cover many different topics, ranging from child welfare, to health, to language and culture. It is important to note that the government of C*nada has taken few concrete steps to bring these calls into fruition since they were first published in 2015. Tomorrow, on July 1st, all 94 recommendations will be read on Trent Radio (92.7 CFFF FM) at 7am and 4pm.

Another example of ongoing settler-colonial violence is the continued neglect, and at times overt violence, from the so-called legal system of the C*ndian state against First Nations, Métis, and Inuit people. According to research from the National Women’s Association of Canada (NWAC), Indigenous women and girls represent 10% of all homicides against women in C*nada, but only make up 3% of the population of women (2010). Alongside this disproportionate violence, nearly half of the cases in most community-made databases remain unsolved to this day, with only 53% of murder cases actually leading to charges of homicide (2010).

A national movement has risen in response to this. With national days of resilience, marches, rallies, and red-dress ceremonies, Indigenous nations have been able to mourn and advocate for Indigenous women, girls, and two spirit people (MMIWG2S) neglected and harmed by the C*ndian government. Alongside these initiatives, a comprehensive account detailing the root causes of this violence against Indigneous women, girls, and 2SLGBTQQIA people is available in the MMIWG2S Final Report. Accompanying an analysis into the systemic causes, the report also details “231 individual calls for justice directed at governments, institutions, social service providers, industries, and all Canadians.” Take some time to read through these recommendations, and think about what you can do to advocate for these calls to action in your own community.

4. Familiarize yourself with local land-defending efforts.

In recent years, we have seen an upswell in land-defending efforts across Turtle Island. Nogojiwanong, and the region in which it lies, is no exception.

The land defence on Wyman’s road in Tyendinaga is just one example of successful land-back activism that’s been taken up in the past two years. Interrupting the transportation of C*nada’s critical industry, the effort of Haudenosaunee land defenders’ railway occupation served as an invigorating and effective effort of national solidarity with Wet’suwet’en land defenders. There are a ton of details about the occupation that can be found through their official media outlet Real Peoples Media, as well as the Credible Mohawk Entertainment page on Facebook.‍

Treaty rights also came under attack when residents of Pigeon Lake began mobilizing against James Whetung, a member of Curve Lake First Nation, who has been seeding the lake with manoomin -- wild rice -- for decades. This is part of an effort to bring manoomin back to the lake, as colonization and the development of the shoreline have decimated the wild rice supply. Whetung reports that he has faced harassment while trying to harvest the rice, with some cottagers threatening to call the police on him. In a 2016 interview with Al-Jazeera, Whetung explains the significance of seeding and harvesting wild rice in Anishinaabe culture, and the importance of having access to traditional foods as a means of decolonization.

In the summer of 2015, Parks Canada gave cottagers permission to cut down Whetung’s rice beds, and in doing so, violated the rights outlined under the Williams Treaty, which allows First Nations the right to hunt, fish, and gather food on the land. Whetung, and the Curve Lake community were left out of the conversations that preceded Parks Canada’s decision to permit the destruction of the rice beds. In response to pushback from the Williams Treaty First Nations, Parks Canada reversed their decision, and apologized. Despite this, cottagers continue to remove the rice beds, while Whetung continues to seed and harvest manoomin. This particular example of settler-colonial violence was the inspiration for Drew Hayden Taylor’s book, and CBC documentary of the same name, Cottagers and Indians.

5. Read the work of Indigenous authors, scholars, and poets

There is no way this list can be exhaustive because there are so many Indigenous writers doing incredible literary work, but here are a few to get you started:

6. Put your money where your mouth is.

If you have funds, consider donating them to an Indigenous organization, or supporting the work of an Indigenous artist. In some cases a consistent or renewing donation is helpful for organizations, publications and long term projects because it allows organizers to know what funding they’ll have well in advance. This is important for hiring, project management and sustainability overall. Check out the organization or project you wish to donate to and find out what they need! There are many important organizations and project going on across the country, here are two organizations doing this work in your own backyard:

The Niijkiwendidaa Anishnaabekwewag Services Circle provides abuse-related healing care and support for Indigenous families and individuals. They have been operational since 1992 and are located in downtown Peterborough. Donate here.

If you want to support Independent Indigenous media, consider donating to the following organizations:

7. Talk to your racist family!

One of the most critical pieces of activism you can do is to “ruin dinner.” No, but seriously, having difficult conversations with the people you have access to is an important piece in all of this. In settler-colonial C*nada, even the most well-meaning relatives hold fast to colonial perspectives. Taking the time to sit down and unpack our national mythologies and the narratives that tell us what C*nada is supposed to be is our responsibility as settlers. We must exercise patience and humility, and have these heavy conversations in the hopes that others won’t have to. Now is the time to take a long, hard look at C*nada’s ugly underbelly, and the atrocities this country is founded upon. We have to make sure that those around us are doing this difficult work, too. 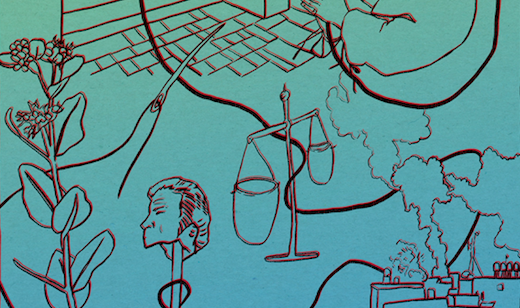 Editorial: How It All Hangs Together
By
Nick Taylor
and
From Nick Taylor

Editorial: How It All Hangs Together
By
Nick Taylor
and
Culture
|
Arts

Editorial: How It All Hangs Together
By